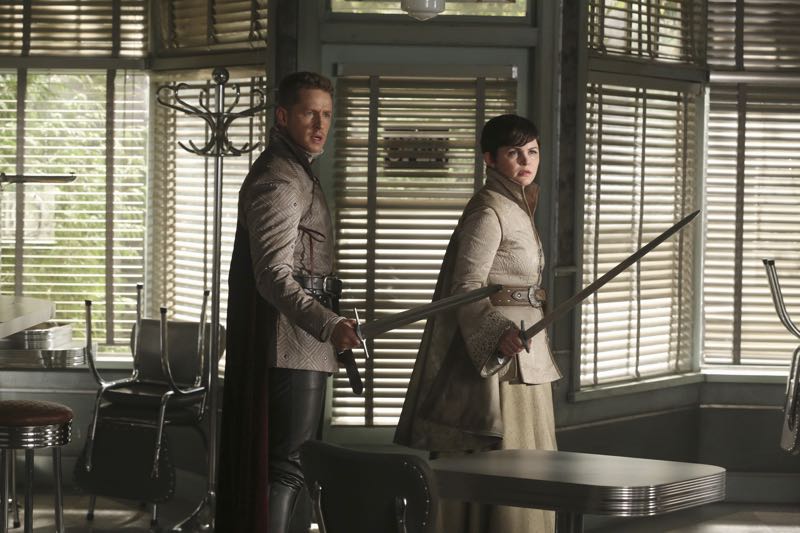 Tonight’s ONCE UPON A TIME, “The Broken Kingdom,” is very Camelot-heavy. Viewers get the story behind the Arthur / Guinevere / Lancelot love triangle, and the search for the dagger during the missing weeks in Camelot. While it does put our main characters’ arcs on hold, it is an enjoyable installment with some intriguing story.

We already know Arthur (Liam Garrigan) is a villain prior to this hour, but that portrait flies directly in the face of the legend. “The Broken Kingdom” helps connect the disparate pieces. We see how insecure and obsessed Arthur gets. He cannot be happy without the full sword from the stone, but it has always remained out of reach. Feeling incomplete without it, he neglects his kingdom, his best friend, even his marriage, in order to pursue what he thinks is his destiny. He doesn’t see himself as evil; his narrow-vision just fools everyone, including himself, about what he’s doing.

Similarly, we already know Lancelot (Sinqua Walls) is noble, but how does that square with coveting his best friend’s wife? “The Broken Kingdom” adequately answers that as well, showing how Lancelot and Guinevere grow closer as they try to save Arthur. Then, Arthur casts a spell on Guinevere that shuts down the true love between the pair in order to maintain an illusion.

Illusion is a key component of ONCE UPON A TIME this year. In the present day, which is not shown this week until the very end, everyone’s memories are gone, and the characters can only believe what they see. In the past, magic often disguises the truth, from the aforementioned stories, to Mary Margaret (Ginnifer Goodwin) and David (Josh Dallas) being cursed as well, made to trust Arthur when they shouldn’t. At least they see through Arthur’s plan to distract David with a title and a seat at the round table early in the installment.

In the B story of “The Broken Kingdom,” Hook (Colin O’Donoghue) tries to break Emma (Jennifer Morrison) of her own delusions. No, not the fact that Henry (Jared Gilmore) is too young to love; that bit just results in a fun scene. But Hook tries to help Emma remember the love they share and access the good parts of her brain. This succeeds in dispelling the hallucinations of Rumple (Robert Carlyle) that Emma has, if only temporarily.

In all of this, true love seems to be the most likely answer to break all the spells, as has been the case in the past. A true love’s kiss might bring Lancelot and Guinevere together and break Arthur’s hold on them. It might help Mary Margaret and David and the others get their memories back. And it just might save Emma from herself, even if love never quite manages to save Rumple when he is the Dark One.

The question remaining is, how does Merida (Amy Manson) fit in? Seen early this season, she re-appears in Arthur’s dungeon, when Lancelot is locked up with her, as well as in the present day when Dark Swan gives her a forced mission. Right now she is the X factor that could sway the outcomes of many a storyline. Without knowing why she’s involved or what she will do, there’s no telling what role she may play throughout this fall season.

Some fans of ONCE UPON A TIME get frustrated when the focus shifts to guest characters, away from the core cast. I understand that attitude, and for those viewers, “The Broken Kingdom” will likely be a disappointment, with Merida’s likely key part only heightening that. Personally, I am just glad for a mostly plot-hole-free hour and some promising teases of what is to come. I like this one.