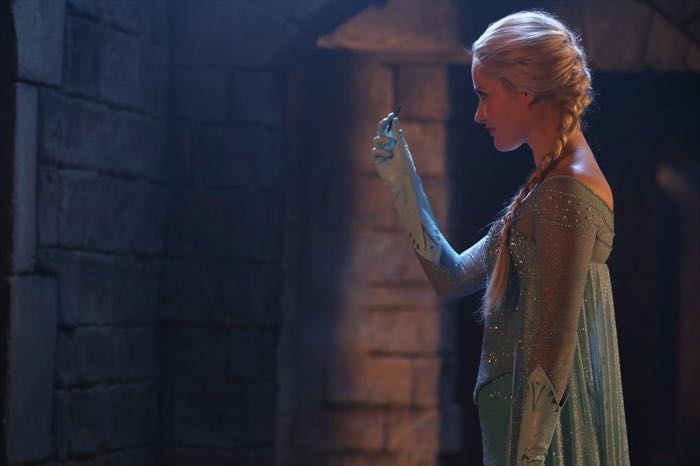 A lot happens in last night’s special two-hour ONCE UPON A TIME on ABC, “Smash the Mirror.” We see the rest of the Arendelle flashback story, bringing us up to the point in which the Snow Queen (Elizabeth Mitchell) comes over to our world. We witness the battle for Emma’s (Jennifer Morrison) soul, both internally and externally. And a former villain is given hope for a happy ending. Let’s get started.

First, despite the glaring flaws in this fall’s run, the Frozen tale has been nearly flawless. “Smash the Mirror” picks back up where last we left it, Anna (Elizabeth Lail) imprisoned by her aunt. Elsa (Georgina Haig) learns of this and quickly concocts a plan to stop the Snow Queen, refusing to believe ill of her sister. Their plan fails, unfortunately, with Elsa ending up in an urn, Anna and Kristoff (Scott Michael Foster) frozen (hehe) in the castle, and the Snow Queen messing with Elsa’s memory before The Apprentice (Timothy Webber) sends her to our world, circa 1982.

The story of the sisters, Elsa and Anna, is a strong one. Anna goes to other realms to save Elsa, and Elsa never stops believing in Anna, even when Anna is under a spell that makes her say horrible things. There is an argument to be made that Nasty Anna is buried deep inside the real Anna, an expression of the suffering she has endured. But an essential part of Anna is that she keeps hope and moves past such issues, always deciding to believe in Elsa. Seeing Elsa pay this back is extremely gratifying, and it’s this bond that the Snow Queen will never have.

There’s very much a there-but-for-you-go-I element in “Smash the Mirror.” Had the Snow Queen’s surviving sister stuck by her, no matter what bad things the Snow Queen accidentally did, her fate might have turned out very differently. The Snow Queen desperately wants what Elsa and Anna already have. Knowing they won’t accept her as one of them, she goes to extremes to force such a relationship. What she will have to end up realizing, but hasn’t yet, is such bonds cannot be forced. They have to be given freely.

ONCE UPON A TIME does make the plot quite cohesive, providing a believable way the Snow Queen comes to our land, sets the stage for her memory spells, and provides a possible motivation as to why she does what she goes. Once the Snow Queen knows she can make people forget and start with a clean slate again, it would be tempting to do so anytime things go bad. That’s surely what happened with Emma, though we haven’t seen that yet.

The Snow Queen is a formidable foe. She goes toe-to-toe with Rumple (Robert Carlyle) this week and wins. While she herself is not the instrument of victory, she does manages to link Emma and Elsa to herself, which is the next stage in her plan, and goes against Rumple’s desires. It will be interesting to see how she can be defeated because, despite knowing she must fail, she is in a pretty good position at the episode’s end.

Emma is still a bit out-of-character in “Smash the Mirror.” After making Henry (Jared S. Gilmore) very slightly bleed, she goes into a panic, and eagerly accepts Rumple’s offer to remove her powers. It takes her forever to get to his cabin, and the others have plenty of time to track her, which doesn’t seem right, but from an emotional standpoint, these hours do a better job of illustrating the turmoil in Emma’s heart than others have. She wants to rid herself of power because she’s afraid of it, but Elsa, who has personal understanding, gets through to Emma and helps her accept herself.

It’s a little strange how easily Emma has things under control at the end of the episode, a new stage for ONCE UPON A TIME. Yet, perhaps it’s a timing thing. Finally able to see who she is and live up to her potential, she gets a handle on the powers. Even if the path to get there is a little bumpy, there are some strong character moments for Emma, and her fireworks scene is an earned triumph.

More uneven than Emma is Rumple’s plot, though. This Rumple takes Hook’s (Colin O’Donoghue) heart and seeks to destroy Emma so he can have power and take over the world. This is absolutely ridiculous. Rumple has never been shown to have these ambitions, and in fact works directly against such things in past seasons. The Rumple in “Smash the Mirror” is a completely new character than before, and not in a good way. ONCE’s biggest glaring mistake this year is to toss out Rumple’s entire arc and start fresh with an unrecognizable antagonist. It makes me ill to see how he has been handled.

Hook, to a lesser extent, is in a similar boat. His actions, from betraying Emma, to confessing to her, have bene erratic and nonsensical. I get the urge to be a hero and worthy of Emma, but then it’s more confusing when Hook acts against those interests. He has been used poorly as of late, too.

On a polar opposite, Regina’s ONCE UPON A TIME arc has been stellar. This week, she gets assurances from Robin Hood (Sean Maguire) that she’ll have a happy ending, ponders the path not taken, has a touching moment with her son, and is given encouragement by Snow White (Ginnifer Goodwin), of all people, who admits her own bratty past. I was worried for a bit the show would let Regina slip, negating her growth, but the other characters have rallied around her, even those who one doesn’t expect to, and in their eyes, Regina finally sees her best self reflected.

What’s more, Robin’s discovery in the library, with the help of Will Scarlet (Michael Socha), gives Regina hope. Robin finds an alternate page to Henry’s storybook, one in which Regina is not a villain. This proves the book isn’t set in stone so Regina can still change her ending! Yay!

Which begs the question, are new pages being added to the book? If so, why hasn’t anyone mentioned it? And because the page just appears in Robin’s bag, does that mean the author is still around? Possibly hiding in the magic library? Maleficent is still in the basement, isn’t she? And where is the Sorcerer’s Apprentice, who can see past and future, these days? Anyone else get the feeling the Apprentice might actually be the Sorcerer? Hmm.

For everyone awesome ONCE UPON A TIME moment, and there are many in “Smash the Mirror,” there is an unfortunate one, sometimes small, but always present. When looking at the TV schedule from last night, ONCE is only about the sixth or seventh best show on Sunday nights (behind The Walking Dead, The Newsroom, The Good Wife, and arguably several others) right now. There are a heck of a lot more than six shows on Sundays, but that’s still not a position to really brag about. If only it would get its act together, like it did a year ago, it could rise to match or exceed some of its currently-better peers. The potential is high, but the series just doesn’t live up to it as much as it should, making its wins, such as last night’s episode, bittersweet.