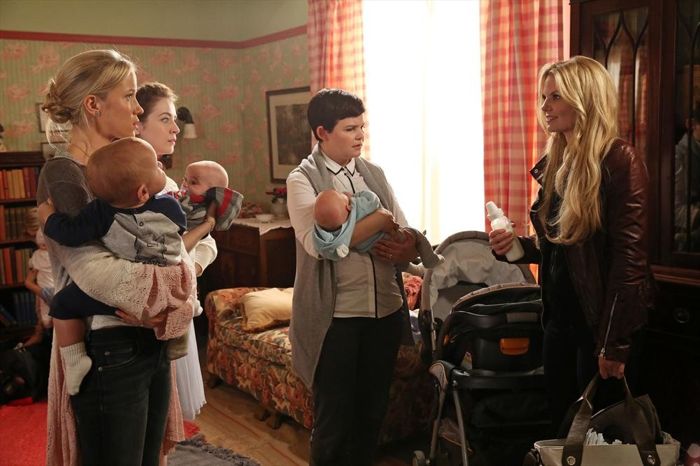 In this week’s installment of ABC’s ONCE UPON A TIME, we see the origin story of “The Snow Queen,” including her relationship with her sisters and their falling out. At the same time, her plans for Storybrooke move forward as she manipulates a vital piece of the puzzle to fall into place.

Once, The Snow Queen (Elizabeth Mitchell), Ingrid, had a strong relationship with her two sisters, Helga (Sally Pressman, Army Wives) and Gerda (Pascale Hutton, Canada’s Arctic Air). They shared a very special bond, looking out for one another and protecting each other. Ingrid had to hide from the world, but not from her family, who loved her as she was. We even get a glimpse of them quite young, with The Walking Dead’s Brighton Sharbino easily sliding into the episode’s titular role.

Then, Ingrid makes a mistake. In trying to punish the Duke (Jonathan Runyon, Miami Medical), a sleazy suitor trying to gain power from the sisters, she accidentally kills Helga. It’s a mistake, but an extremely costly one, which ruins the bond between Ingrid and Gerda, too. In retaliation or self-defense Gerda locks Ingrid in a bottle and wipes her memory from all the land.

“The Snow Queen” is a tragic tale of love gone sour after an unspeakable sin is committed. Ingrid is surely as upset with herself as Gerda is, even if she resists going into her prison, but in the intervening years, her pain turns to evilness. Ingrid is not only out to recreate that once perfect happiness she had, thinking she just needs two sisters with powers (to allow greater understanding between them), but she also has stopped caring about others. She feels wronged, an understandable emotion, and a fitting backstory for this season’s ONCE UPON A TIME villain.

In order to fulfill her desires, Ingrid needs two new sisters. Elsa (Georgina Haig), her niece, is an obvious choice because they share the same lineage and exact talents. Emma (Jennifer Morrison) may be a little different, but Emma’s feelings of abandonment and alienation are close enough to Ingrid’s experiences for easy manipulation. It takes almost no effort for Ingrid to get Emma in the mindset she wants, and while Emma won’t betray her loved ones, she is feeling separate from them. Though Ingrid may already have tried and failed with Emma, Emma’s memory of their previous time together being missing. Elsa will be a tougher nut to crack, unless wiped memories can assist.

Ingrid’s plan is not fully exposed, but “The Snow Queen” is on the right track there. Ingrid still needs three ribbons she and her sisters gave to Rumpelstiltskin, and he’s amiable when she gives him what he wants. The upcoming weeks should reveal all, and this installment puts us well on the path to an acceptable end game.

Rumple’s sourness is less digestible. He seems positively gleeful at whatever dark task Ingrid tells him he must do. As I’ve mentioned before, this twist negates Rumple’s entire character arc in ONCE UPON A TIME before this subplot, and it’s hard to imagine he really wants to go out and control the larger world. It just doesn’t make sense, given what we’ve seen of him before.

The other side story serviced in “The Snow Queen” finds Robin Hood (Sean Maguire) unable to fall back in love with his wife, so he kisses Regina (Lana Parrilla) once more. To do so, he must break his code, which doesn’t bode well for his continued heroics. Yet, Regina has tried to do the right thing and get over him many times. While their love may be less than pure, it’s hard not to root for the two to find a happy ending together, which may be where ONCE UPON A TIME is taking them. I just hope service is paid to why this isn’t completely a good idea. Since Regina is the cast member being best handled this year, that seems likely-ish.

One complaint I have about “The Snow Queen” is the way-too-brief appearance of Aurora (Sarah Bolger) and Ashley (Jessy Schram) in Mary Margaret’s (Ginnifer Goodwin) mommy class. It’s a fun scene, if a bit corny, and it contributes nicely to Emma’s arc, but why bring back these familiar faces only to waste them in such a quick moment? Will they be recurring in this capacity, or will Ashley disappear for another three years with no explanation?

“The Snow Queen” is one of the better episodes ONCE UPON A TIME has delivered this fall, a huge step back from the pit of last week. The characters are consistent within the hour and the season even if some of them, mainly Rumple, don’t match their series journey. I was very worried about what came after “Family Business,” but this has calmed much of that.