ONCE UPON A TIME Recap Season 4 Episode 6 Family Business 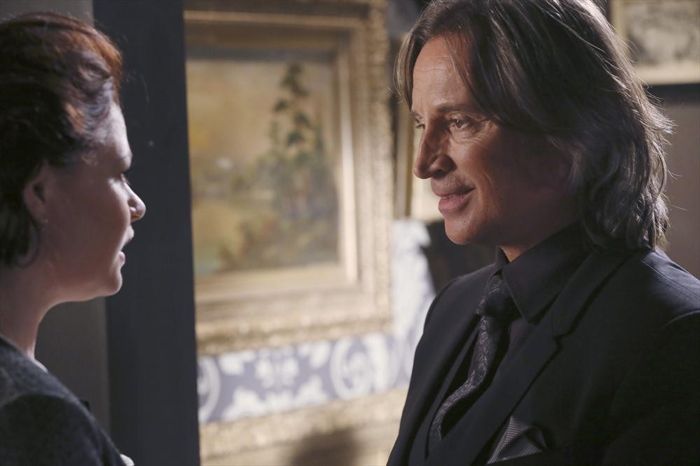 Tonight’s installment of ABC’s ONCE UPON A TIME, “Family Business,” starts well enough, but quickly goes downhill by the halfway point. As everyone searches for the elusive Snow Queen (Elizabeth Mitchell), we see some of Belle’s (Emilie de Ravin) backstory, which sparks behavior in her that is not at all in keeping with her character. The Snow Queen’s mission, too, is revealed, but again, doesn’t quite make sense.

Let’s start with Belle. Introduced as a match to the animated version, Belle is a sweet woman who believes in the goodness of people above all else. “Family Business” finds her desperate to remember her mother’s (Frances O’Connor, Mr. Selfridge) death. This mission takes her to Arendelle and an encounter with Anna (Elizabeth Lail), Oaken (Darcey Johnson), and Grand Pabbie (John Rhys-Davies). Then, the Snow Queen shows up and Belle puts her memory before Anna’s life, allowing the Snow Queen to capture Anna.

One might argue that this experience is what makes Belle so good. Maybe this one mistake is why she learned her lesson and went straight, becoming hero-like, if not a full-blown hero. That would actually make sense. Except, in present day Storybrooke Belle lies to Elsa (Georgina Haig) and Rumple (Robert Carlyle) about knowing Anna. This is not something our Belle, who holds Rumple to a very high standard, would do. Then, she compounds her sins by using the dagger to control Rumple, again, breaking character completely.

Now, bad Belle is a device that moves the story along. Because of her, we find out the Snow Queen’s purpose. But that doesn’t excuse poor storytelling. There are any number of ways the same information could be conveyed without ruining arguably the show’s purest character, and that makes “Family Business” a huge disappointment.

The Snow Queen’s end game is also not befitting the character. In this episode, we learn the Snow Queen’s desire is to have the residents of Storybrooke turn on themselves and kill each other off until only she, Elsa, and Emma (Jennifer Morrison) are left alive. She thinks Elsa and Emma could then replace her departed sisters and the three could be a family. Yet, the Snow Queen sees in the flashback story that just wanting a family doesn’t make it so. How can she possibly believe that Elsa and Emma will want to be with her after everyone else dies? Even if the three are alone together, the girls would likely turn on their elder.

The dark magic introduced in ONCE UPON A TIME, the Snow Queen’s malicious mirror and the Sorcerer’s hat, are solid parts of a good story. I like them both and think they could be well used in the narration. Instead, making them part of this ill-begotten twist, they are tainted and probably won’t end up being what they should be. They present danger, but ignore the obvious threats they possess.

I’m confused about the prophecy surrounding Emma. The Snow Queen found Emma a long time ago and is dropping hints to remind Emma of this, presumably so Emma will remember how much she liked the Snow Queen and they can be a family again. But why take the memories away at all? And why didn’t the Snow Queen keep Emma when she had her? Why come back now? It just doesn’t seem like these pieces will come together satisfactorily.

We’re also left to wonder about Anna. Is she in Storybrooke? Is she back in Arendelle, still locked in the dungeon? What happened to Elsa in the meantime? This is too many questions posed for a story that has robbed me of my confidence in a comprehensive ending.

“Family Business” is not without its good parts. Regina (Lana Parrilla) telling Robin (Sean Maguire) she may not be able to save Marian (Christie Laing) is a rich scene, full of interesting pathos. Hook (Colin O’Donoghue) joking that everyone in Storybrooke is related is funny and right on the money. But these small gems aren’t enough to save this dud of an episode. ONCE UPON A TIME is not doing well with its exposition or the structure of its arcs, and those are to very important, vital elements of the show.