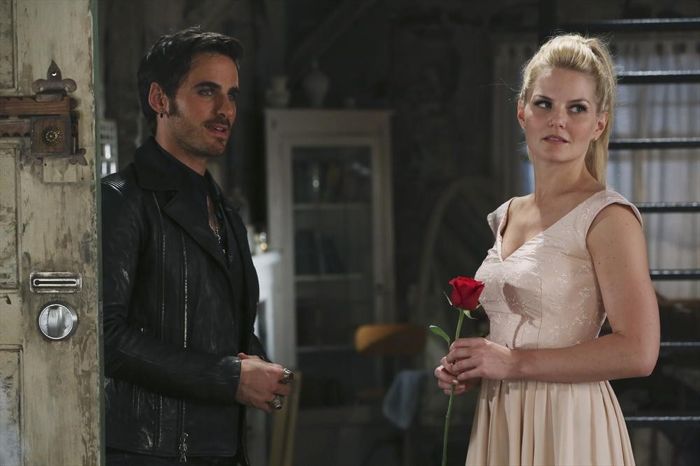 This week’s installment of ABC’s ONCE UPON A TIME is called “The Apprentice.” Rumple (Robert Carlyle) tries to steal a magical box from the Sorcerer’s Apprentice (Timothy Webber, Men in Trees, Arctic Air) that would allow him to keep the Dark One’s powers, but without the limitations. Meanwhile, Hook (Colin O’Donoghue) and Emma (Jennifer Morrison) have their first date, a thief plagues the town, and Elsa (Georgina Haig) searches the town census for signs of her missing sister.

I need to start this paragraph by saying I STRONGLY disapprove over the spoiling of Rumple’s character this year and last spring, negating his growth arc from the first couple of seasons. Still, at least “The Apprentice” finally offers a plausible explanation as to why Rumple cannot have a happy ending, mentioning that villains cannot find their bliss because that’s not how the storybook works. It would be nice if this were established before now, but still, at least it’s offered now. In Regina’s (Lana Parrilla) quest to end up with true love for herself, might she also show Rumple a way to finally, once and for all, get back to who he should be?

This week’s ONCE UPON A TIME doesn’t give us any positive signs in Rumple. His quest to get the box from the Apprentice is something every Dark One has attempted, as we see in a Zoso (Brad Dourif) flashback, and it is only done for evil purposes. Rumple is tricking Belle (Emilie de Ravin), the woman he supposedly loves, and taking out innocent men to get what he wants. These are not good signs.

Hook lets his inner villain out, too. It’s one thing for him to get his hand back (which, by the way, the fact that the hand is not really cursed is totally predictable), but it’s another for him to engage in a game of mutual blackmailing and lying with Rumple. True, Hook has never had that catalyst moment, as Rumple did, where he turns over a new leaf and truly proves himself, but fans of ONCE UPON A TIME don’t expect him to behave this badly. It’s a bit inconsistent for the character, and not a welcome development.

Henry’s (Jared Gilmore) actions also don’t make sense. Isn’t Rumple suspicious when his only grandchild, whom Rumple has strangely ignored for awhile despite Henry’s connection to Rumple’s beloved son, suddenly wants to spend time with him? Rumple is too bright to be fooled by the kid unless love blinds him, and there is no hint of that. Their family connection also should have been explored more fully before now, and that’s glaringly obvious when it is approach at this juncture.

The Frozen arc takes a sharp left turn this week when Anna (Elizabeth Leil) accomplishes her task of figuring out why her parents went to the Enchanted Forest and she returns home. One does not expect this, given Elsa’s efforts to find Anna, so there’s definitely more story in their land to tell. I like when the writers surprise me, which doesn’t happen every week on ONCE UPON A TIME, and that kicks this episode up a couple of notches.

Less enticing is the Snow Queen’s (Elizabeth Mitchell) behavior. She appears only briefly in “The Apprentice” to taunt Emma. It’s fine if the show is taking the slow-reveal approach and only giving us bits of the Queen’s motivation at a time. But it’s weird to get so much of her last week, and then just a brief look at her this one that has her behaving strangely with no discernable reason as to why she is doing so. That needs to sort itself out.

I’m sorry if this review has leaned negative, as I mostly liked it. There is just a lot more to say about the complaints than the impressive bits. There are lots of good things to say about “The Apprentice,” too, though. I love how Snow (Ginnifer Goodwin) and Charming (Josh Dallas) make too big a deal over Emma’s date, the Lady and the Tramp reference at the restaurant, the hints about Will Scarlet’s (Michael Socha) true mission in Storybrooke, which has to be to find the Red Queen again, and the meta references where the characters basically acknowledge their storybook roots. This style of humor is exactly what the show should strive for more of, as it works extremely well for the premise and makes for entertaining dialogue.

“The Apprentice” isn’t a bad episode, but it’s not a great one either. It is very Rumple heavy, and I like his Dark One stories, but his behavior in Storybrooke is troubling, as is Hook’s. If the characters and tone were a little more consistent, that would improve the overall presentation a lot.