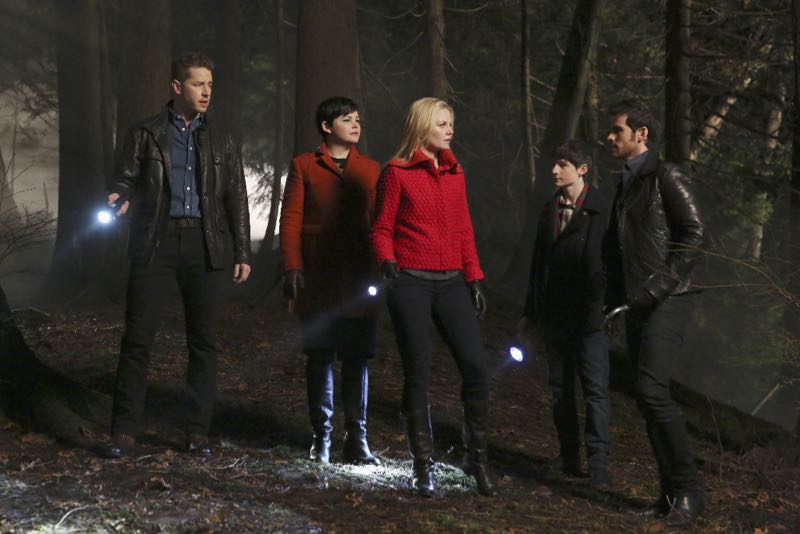 As this week’s Once Upon A Time begins on ABC, Rumple (Robert Carlyle) finds The Author (Patrick Fischler) as he flees through the woods. This surely spells trouble for our heroes, but this installment, “Heart of Gold,” doesn’t deal with that. Instead, we see flashbacks to both the pre-Storybrooke time and New York City of nine weeks ago. Both periods contain some surprising revelations.

First, in the past we see Rumple send Robin Hood (Sean Maguire) to Oz to steal broken heart potion from the Wicked Witch (Rebecca Mader). Although Robin has already given up being a thief, he is in debt to the Sheriff of Nottingham (Will Traval) and needs the money Rumple is offering. Robin has promised his wife, Marian (Christie Laing), that he will support her, and without what Rumple is offering, he cannot fulfil that promise.

I could argue that Robin’s code is more than a little subjective, stealing when he feels it is justified, and not seemingly feeling any guilt about it. The fact that he lies to Will Scarlet (Michael Socha), whom he meets in Neverland and also promises potion to, proves that Robin’s perspective is a bit skewed. But I didn’t find these plot holes nearly so glaring, given that Robin is consistent with this in the near-present, and I like seeing more of these supporting characters.

Speaking of Will, he is in Oz looking to mend his own broken heart after the death of his sister. This presumably happens before he makes his way to Wonderland. I am still very, very eager to find out how he comes to Storybrooke after the events of Once Upon a Time in Wonderland and where the Queen of Hearts, his one true love, is, but “Heart of Gold” doesn’t answer that.

When Robin gets back to the Enchanted Forest, he re-commits himself to the outlaw life. This seems a little unnecessary and hokey. It does provide, though, an opportunity for Robin of Loxley to become Robin Hood, thus combining the two Sherwood myths. I’m not entirely satisfied with the way this plays out, but learning Robin gifts Will the potion, Will doesn’t steal it as I had assumed, is pleasant enough.

As mentioned, present day New York finds Robin with the same wavering morality as in fairytale land. Rumple has a heart attack in Neal’s old apartment, where Robin and his family are now living. Robin feels bad for Rumple, whose dark heart is failing him away from the magic that kept it going, and agrees to go after the same potion, which the Wicked Witch conveniently sent to the real world with The Wizard. Robin steals it and, after a Cowardly Lion-like escape through a window, thinks he cures Rumple.

That’s when the hour’s big shocker comes to ONCE UPON A TIME: Marian is really the Wicked Witch, whom replaced Robin’s love shortly before Emma (Jennifer Morrison) brought her to Storybrooke, and who didn’t really die in season three. It’s slightly sad that the real Marian is dead, but it’s also a bit of a relief to learn that no one else has a legitimate claim to Robin’s heart other than Regina (Lana Parrilla), who deserves a happy ending. The Wicked Witch can’t resist rubbing this in Regina’s face, er, ear, and this allows Rumple to hold Robin over Regina’s head.

Too bad Marian makes Robin delete Regina’s number from his phone, but he has plenty of other Storybrooke denizens in his contact list, so he should be able to go home. Get home, he must. Regina may be able to help him, either though teaming up with Rumple to turn Emma dark, or after defeating the bad guys, which is the outcome I hope for. Regina’s face at the end of “Heart of Gold” doesn’t reveal her decision, but since Robin is on the line, she will definitely have strong feelings about the choice.

Rumple’s more vulnerable scenes in “Heart of Gold” would be good if not for how much ONCE UPON A TIME has ruined his character. His ruminations feel unearned and cheap because he has turned his back on the redemption he earned without explanation. I feel like ONCE UPON A TIME is trying to explain away this glaring inconsistency, but it just doesn’t work.

“Herat of Gold” is one of the better episodes this season. I like all of the Robin and Will stuff, even when it drifts into goofy territory, and finding out the Wicked Witch never really went away is cool. Still, the show just isn’t as good as it once was, and this hour doesn’t plug the holes from previous weeks any more than any other has. ONCE UPON A TIME may one day get good again, but this is a weak attempt at that, even if it’s OK when taken on its own.