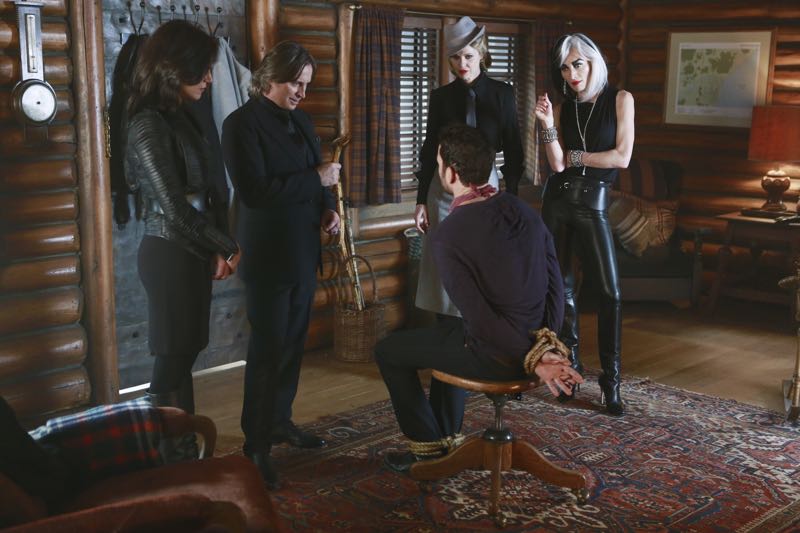 ABC’s ONCE UPON A TIME focuses on yet another “Poor Unfortunate Soul” in this week’s episode. This time, it’s Ursula (Merrin Dungey) who is getting a bad rap based on past wrongs. Can our heroes use that to their advantage and peel her away from the other villains? Hopefully before Regina (Lana Parilla) and / or August (Eion Bailey) are lost to them forever?

The backstory between Ursula and Hook finally comes out. When Ursula is young (and played by The Following’s Tiffany Boone), she is promised help from Hook (Colin O’Donoghue). When her father, King Poseidon (Ernie Hudson, Ghostbusters, Oz), interferes in their deal, though, Hook also fails to hold up his end of the bargain. In a fit of rage, Ursula trades tail for tentacles and becomes the familiar evil monster. Of course, Hook makes up for his bad decision in the present, helping Ursula get her voice back, and the sea witch gives up her dastardly quest to return home with her dad.

I don’t know that I really buy this. This is the trade deal Hook is so ashamed of he can’t tell Emma (Jennifer Morrison)? Seems he is at least sort of in the right, even if he’s not noble. Ursula, while plagued by grief, gives up everything because her singing voice is gone, rather than fighting to get it back? Then, a long, long time later, she switches sides again just because she gets the voice back?

And how does Ursula get a happy ending with her father? She’s a villain, right? The rules that ONCE UPON A TIME establishes are that villains cannot have their happy endings. Yet, Ursula gets one, and Hook is having one with Emma right now. Regina would be near one had Robin (Sean Maguire) not been forced to leave, which had nothing to do with the story. This is all quite flimsy and doesn’t hold up to scrutiny.

That is, unless we find out all of Rumple’s (Robert Carlyle) character development, including his redemption arc from the first two and a half seasons, is magically taken away by the book because of the story rules, and the same happens for Ursula and Hook. That would fix a large number of the problems I and others have had with the last year, and help get ONCE UPON A TIME back on track. Though, there’s no evidence of that happening in “Poor Unfortunate Soul.”

Speaking of the bad guys, the witches and Rumple torture August for information, which they don’t get. However, Regina manages to get a message off to the good guys, who then come and rescue August. Because Rumple doesn’t trust Regina, this actually works in her favor, making sure she’s not around to blame for August’s escape. This is a clever twist.

Will August stay in the show? I don’t think Once Upon A Time will toss in a true Emma / Hook / August love triangle because Emma and Hook are already quite far down the romantic path, so what would August’s purpose be? Honestly, I don’t care; I’d just like to keep him around.

August reveals that the author is trapped inside the book, which makes him much harder for the villains to get to. I don’t know why Regina tells Rumple that Henry (Jared Gilmore) has the missing page, as she should do everything possible to keep from endangering her son, especially after seeing Rumple torture August. But for now, as long as Henry holds onto the page, the author will be safe and the villains won’t get their happy ending.

Yet, going directly for the author isn’t Rumple’s plan, anyway. He wants to turn Emma’s heart dark, since the bad guys can’t win as long as the Savior exists. Wouldn’t the Savior, by definition, have to be a Savior? How can she be swayed to the other side? Does that negate what she’s done? I don’t get this bit of logic, or lack thereof, either.

“Poor Unfortunate Soul” isn’t totally bad. A dream sequence Regina has involving Robin and the Evil Queen is cool, even if the writers then have Regina over-explain it to the audience. There are also some good lines and touching moments, including when Ariel (JoAnna Garcia Swisher) returns and saves Hook. The problem is, the story is so disjointed and poorly planned out that it’s hard to see how the show will twist itself into something even resembling a satisfying resolution. Not to mention, when did Elsa get the power to shrink ships and store them in bottles? ONCE UPON A TIME has been driving on the edge of a cliff, frequently teetering, but I think it’s finally gone off completely.