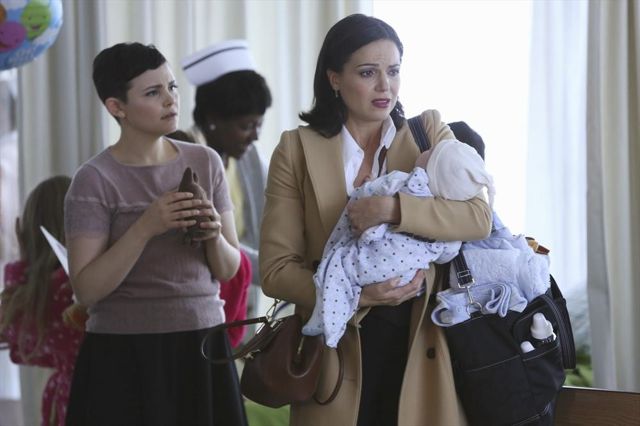 The latest installment of ABC’s ONCE UPON A TIME, “Save Henry,” is more about a mother than the son named in the title. Through flashback, we see how Regina (Lana Parrilla) comes to adopt Henry (Jared S. Gilmore) and how it ties into the larger story. In the present, Regina, Emma (Jennifer Morrison), and Snow (Ginnifer Goodwin) attempt to rescue the boy and escape Neverland.

Regina has long been one of the most fascinating characters on the series. While she has done evil things, I do not believe that she is ultimately a true villain because she still has heart. We see this in the hole she feels in her life when she is absent a Henry. And we see how much she loves young Henry and that she will do anything to get him back.

It’s true, Regina kills the first Henry she loves, her father, in order to enact the curse that creates Storybrooke. This is a truly vile thing to do, and as promised to her by Rumple (Robert Carlyle), Regina soon begins to feel the loss, craving something to plug that hole. She finds that something when she gets Rumple to secure her a baby, which just happens to be the son of the savior that can ruin her.

We witness Regina’s early struggles as a mother, unable to stop her child from crying. Does baby Henry sense the darkness in her? And when she finally connects with him, does he sense the love? This is a woman who would go to the ends of the earth for her child, and would not make the same mistake with him that she made in dealing with the elder Henry.

That’s why, when Peter Pan (Robbie Kay) has the three ladies bound to a tree that feeds off their regret, Regina alone is able to break free. It’s not that she doesn’t have remorse for the mistake she’s made; it’s that her focus is on the greater feelings she has for Henry, which makes the rest of it worth it to her. Her love for Henry is true, and she is rewarded by Henry calling her “mom” as she tucks him in, safe back on the Jolly Roger near the conclusion of “Save Henry.”

Will this relationship be what ultimately can redeem Regina? It’s hard to say at this point. There is little doubt she would do bad again if Henry were threatened. But I’m starting to think that she will not do anything too evil without Henry’s survival on the line. She knows that she cannot keep Henry and fall back to her bad habits, so unless she has a driving purpose, or unless Henry dies, she likely won’t truly cross the line again. Not fully.

A sign of this is the way Regina wipes her own memory of whom Henry’s mother is, even though that hurts her chances of stopping Emma. Like Rumple, who has to put Henry’s welfare before his own in order to repair the relationship with his son, Neal (Michael Raymond James), Regina puts her existence on the line to protect the son she has fallen for from herself. It’s a selfless, noble gesture, done before we even know Regina has such things in her.

Parrilla is a fantastic actress, and she deftly handles the role with a level of skill nearly unmatched in the show. Once more, I am drawn to the way she can find the subtleties and buried qualities in the part, and make us care about someone that we should have written off long ago. I do think both the story arc of the character and her popularity can be majorly attributed to Parrilla’s impressive talent, and wish for more episodes featuring her soon.

The conspiracy and coincidences in “Save Henry” leave a lot of questions unanswered. Does Mr. Gold always know he is Rumple? Is his knowledge triggered by Emma arriving? Is Regina destined to get Henry, or is this something Rumple builds into the curse? Why does Pan send Michael (James Immekus) and John (Matt Kane) to look for Henry eleven years ago, instead of only recently? These answers matter.

It’s fun to get back to Storybrooke and its charming residents. Granny (Beverly Elliott), Archie (Raphael Sbarge), Dr. Whale (David Anders) and even Sidney (Giancarlo Esposito), or Sidney’s voice, play a role in Regina’s flashback. I didn’t realize how much I missed them until they are glimpsed again in the sleepy hamlet. I’m looking forward to getting back there next week.

The only real complaint I have is that Snow, Emma, and Regina set off on their own to face Pan. I understand Neal staying behind to look after the Lost Boys, and can even see why he shouldn’t be left by himself. But the Boys seem to be mostly defeated, happy to help in return for a home, so more than three people can go after Pan. David (Josh Dallas) or Neal, at least, could have gone, too, leaving the other, Hook (Colin O’Donoghue), and Tink (Rose McIver) to watch the ‘captives.’ It’s another case of using half measures against a foe that has proved deserving of more.

It is weird that Henry is quickly dying without his heart when others survive for months or years just fine on the show without one. However, that could have something to do with Henry’s heart specifically, which we know is special, or the way Pan wants to use up the energy from it.

I will not complain about how easy Pan is to defeat in “Save Henry.” It certainly seems too good to be true that he is stopped at the tree, but his sneaky twist at the end, taking over Henry’s body and recruiting Felix (Parker Croft), his one loyal servant, to cause more trouble, is a very satisfying continuation of the arc. He is not defeated; he rises again!

ONCE UPON A TIME still has two full hours left in this fall run, airing Sunday nights at 8 p.m. ET on ABC.