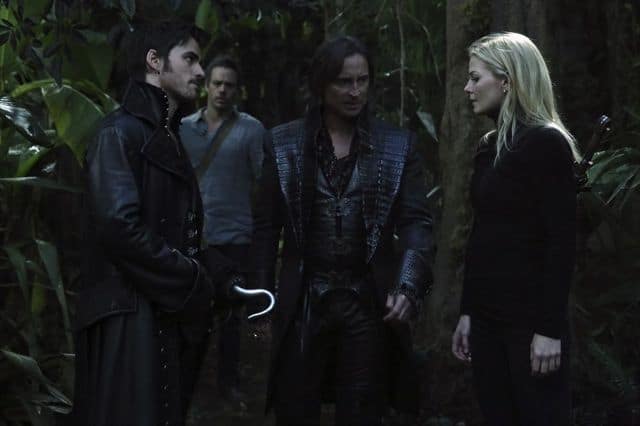 This week’s ONCE UPON A TIME encourages viewers to “Think Lovely Thoughts,” even as the characters on screen struggle to do so. Peter Pan (Robbie Kay) brings Henry (Jared S. Gilmore) to his endgame as Henry’s family rushes to save him. Interspersed with this, we learn Rumple’s (Robert Carlyle) connection to Neverland’s baddie, giving us a glimpse at the Dark One’s childhood.

As much back story as ONCE UPON A TIME routinely presents, it’s rare that we get an extended look at one of the characters in their youth, unless it relates to another character’s adult life (such as Snow in Regina’s flashbacks or Bae and Cora in Rumple’s). Yet, “Think Lovely Thoughts” takes us back to when Rumple was a wee lad (played by Wyatt Oleff), probably the earliest moment, chronologically speaking, the show has done so far.

It seems that being a bad dad runs in Rumple’s family. Not only did he choose magic over Bae, and Bae grew up to be Neal (Michael Raymond-James), who unintentionally left his own son, but Rumple’s father, Colin (Stephen Lord, Shamless), chose his own selfish pursuits over Rumple. Who can blame Colin for being a scoundrel, because, after all, his own father sold him to a blacksmith, and so he had no role model to look up to?

Well, most people, it turns out, as Colin has no regrets about his misdeeds, which is the key difference between a good person and a bad person. In fact (SPOILER ALERT!) Colin is actually Peter Pan, magically restored to youth so that he can stay in Neverland, and who is now willing to sacrifice the life of his great grandson in order to maintain this existence. Talk about a terrible family tree!

“Think Lovely Thoughts” actually puts Rumple in a positive light. Despite his father’s emotional abuse, Rumple had two (literal) spinster aunts (Stargate franchise actresses Lindsay Collins and Glynis Davies) who tried to teach him right from wrong. That’s probably why, unlike Colin, Rumple regrets the screw-ups he makes as a father, and spends his life trying to correct them. The cycle has been broken, whether Neal is ready to admit that or not.

It’s natural that the others are skeptical of Rumple’s nobility, given some of the things he has done in the past. Neal makes Rumple hand over Pandora’s Box, not trusting Rumple to do right by Henry, only to come around by the end of the hour after Rumple proves himself. This could definitely be the start of a new chapter for the men in the family.

That is, if things can work out. As “Think Lovely Thoughts” ends, Rumple is trapped in Pandora’s Box and Henry is dead, and while I doubt very much that either issue is permanent, there is a long way to go to fix the mess ONCE UPON A TIME leaves our cast in.

Henry’s actions, resulting in his death, are born of naivety. Pan lies to Henry, and even after Neal, Emma (Jennifer Morrison), and Regina (Lana Parrilla) join their voices to try to convince Henry of this, Henry doesn’t believe them. Perhaps it’s because he’s from a family of heroes, and just wants to live up to the reputation. Or it could be because Henry knows these three, his parents, would lie to protect their son, and so may not be trusted in this situation. Whatever reason, he makes the wrong choice, tricked by a devilish imp into losing his heart, and thus, his life.

Seeing Regina, Emma, and Neal come together is touching, and that’s why I’m not worried about Henry. Regina and Emma have great magical power, and will stop at nothing to protect their boy. Neal is determined and strong. If they remain united, and we have every reason to believe that they would, they will succeed… eventually.

The weird part about “Think Lovely Thoughts” is why the “Save Henry” group, finally united after many episodes of fragmentation, splits up in this episode. Hook (Colin O’Donoghue) and Tink (Rose McIver) I kind of understand because someone needs to protect Wendy (Freya Tingley) and keep an eye on the Lost Boys, but surely Snow (Ginnifer Goodwin) and Charming’s (Josh Dallas) hunt for a cure can wait. Charming’s life is in no immediate danger, and if Rumple traps Pan in the box, as intended, there’ll be plenty of time to finish this later. Why would they set off on their own without knowing that their grandson is safe?

Honestly, that’s the only problem I have with this episode. The special effects, especially the hourglass in Skull Island and the creepy shadow (voiced by rocker Marilyn Manson), are fantastic. Lord is perfect as both Rumple’s dad and the earlier version of Pan, with just enough foreshadowing to make the twist ending conceivable, but not enough that it’s obvious from the start. Rumple’s back story is well thought out, and his relationship with Pan makes sense now. And, as stated above, I love the bits with Henry’s parents.

There are still three hours to go in this fall run. Even if ONCE UPON A TIME spends an hour back in Storybrooke, tying up loose ends and setting up the spring story, that leaves two more installments to complete the Neverland tale. I’ve loved this larger-scale adventure with a finite, approaching ending, and look forward to how it will all wrap up.