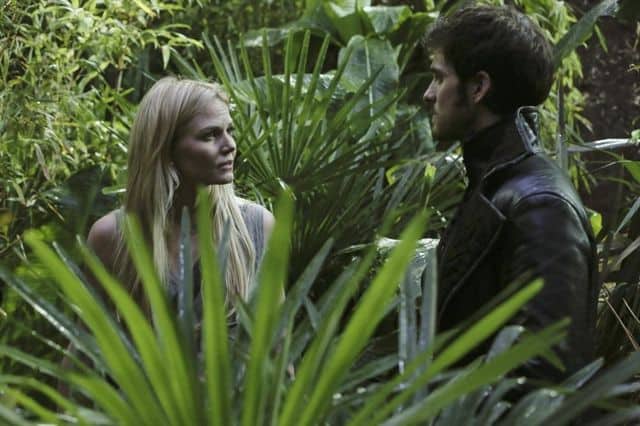 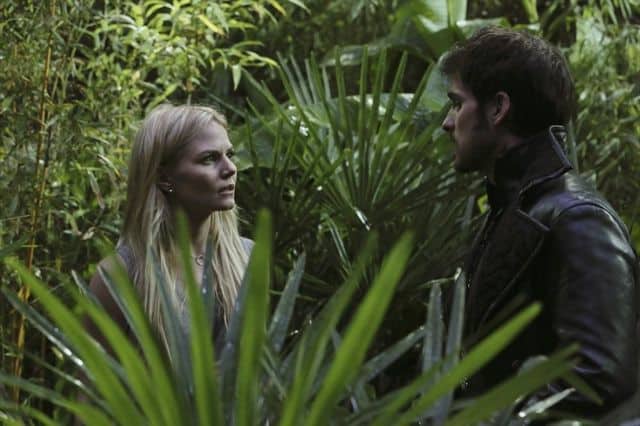 ABC’s ONCE UPON A TIME finally returns to Storybrooke this week in “Dark Hollow.” Ariel (Joanna Garcia Swisher) fulfills her mission of getting a message to Belle (Emilie de Ravin), and together they find the object Rumple (Robert Carlyle) needs to defeat Peter Pan, literally Pandora’s Box (how cool is it going to be when that opens!). But getting the box back to Neverland proves not so easy when a couple of guys from the Home Office seek to destroy it.

It’s pretty predictable that the two boys who have broken into Storybrooke are John (Matt Kane, Switched at Birth) and Michael (James Immekus, Boxboarders!), especially once you see one is taller and wears glasses. But that doesn’t stop one from wondering what they are doing there, and what control Peter Pan (Robbie Kay) has over them. He’s evil, and we’ve seen that the Darlings are sweet, or at least they were as children. Plus, Michael and John have grown up, so they clearly didn’t stay in Neverland as Lost Boys all these years, making one assume they aren’t totally loyal to the Big Bad.

Of course, Pan has something to hold over them. It turns out to be Wendy (Freya Tingley), still a child after a century, who Pan then uses to manipulate Henry (Jared Gilmore). One definitely feels sorry for the Darling family, just more pawns in Pan’s twisted games. If anything, the revelation that Pan has abducted Wendy and kept her for so long, controlling her brothers with threats, only makes him seem more evil.

Unfortunately, the plot to stop Pan is growing stale. The parts of “Dark Hollow” that are set in Neverland break down into petty squabbling, losing the focus of the story. It’s a good thing Belle and Ariel’s little adventure is such fun, and the dwarves get some great, humorous lines, or else this installment would have little to no redeeming qualities.

Snow (Ginnifer Goodwin) is still upset with Charming (Josh Dallas) at keeping his poisoning and inability to leave Neverland a secret from her. This is understandable, it really is, but three seasons in, tension between Snow and Charming feels so old, not that it was ever any good in the first place. They have had enough issues, and unlike some couple’s bickering, which can be entertaining, theirs just seems whiny and dumb. They’re both noble and heroic, so even when they enact misdeeds, they’re for the right reasons. Just move past it already!

The Emma (Jennifer Morrison) / Neal (Michael Raymond-James) / Hook (Colin O’Donoghue) love triangle is no better. Hook accidentally lets it slip to Neal that he kissed Emma, assuming Emma has already told Neal, and then Neal and Hook argue, leaving them vulnerable to attack by Pan’s shadow and friends. Emma is done with both of them for the present because her focus is her son, not her love life, exactly as it should be. The guys eventually agree, but it’s too little, too late.

Look, there’s a way to do this triangle right that could be really cool. Hook is someone who seems worthy of love, at least right now, and obviously Neal and Emma still have some unresolved feelings from their sordid past. Plus, Neal and Hook have a past relationship that could come into play. However, a boy has been captured by a really, really bad dude. This drama needs to wait, and by not doing so, it drags the episode down.

ONCE UPON A TIME has always been a bit uneven. I guess it’s understandable that, after a string of terrific installments, there’s bound to be a dud. It’s still disappointing, though, because they were doing so well lately that I’d forgotten about many of their flaws, which come barreling back in “Dark Hollow.”

I would never argue that the series should ditch character stuff in favor of action. That’s what should have happened in this hour, but overall, I really love when the players change and wrestle with quandaries. Seeing Regina (Lana Parrilla) keep her bargain with Ariel is a wonderful moment for “Dark Hollow,” something Regina would not have done only a short time ago. But there’s a time and a place for everything, and by giving us the worst of the personal stuff at the worst possible time, “Dark Hollow” is largely a failure.