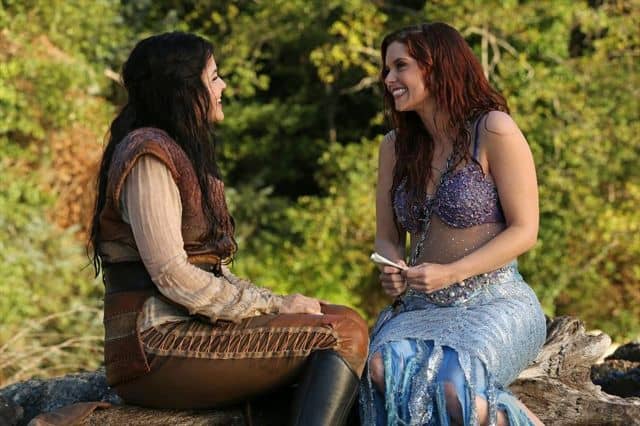 ABC’s ONCE UPON A TIME introduces viewers to “Ariel” this week. The famous mermaid’s story doesn’t quite play out the way fans of the original expect it to, of course, as this show rarely presents a fairy tale in a traditional, straight forward manner. Instead, she is tied into Snow White’s (Ginnifer Goodwin) past.

On the run from Evil Queen Regina (Lana Parrilla), Snow dives into the sea and is pulled out by Ariel (JoAnna Garcia Swisher, Better With You, Reba). Talking to the fish-woman, Snow learns Ariel is in love with Prince Eric (Gil McKinney, Friday Night Lights), and decides to help her new friend get her man. Ariel and Eric hit it off, but upset about returning to the ocean and leaving Eric behind, Ariel accepts help from Ursula, who is actually Regina.

It’s cool that Regina is tied into The Little Mermaid tale, but isn’t actually Ursula, merely pretending to be that persona. Ursula is a sea creature, and it wouldn’t make sense for Regina to spend so much time under the water when her kingdom is on land. It’s unknown if the real Ursula, who makes a cameo in CGI form, will be involved in Ariel’s story, but some of the familiar elements, such as Ariel temporarily gaining legs and losing her voice are included.

What is disappointing is that Ariel’s underwater kingdom is not shown. It’s not necessary to this particular tale, and ONCE UPON A TIME has yet to introduce us to any other characters who could or would go there, so it seems extraneous. Yet, for a series about magical realms, one may be forgiven for being curious as to what Ariel’s home would like, and sad that the show chooses not to show it. Thus, Ariel’s tale is only partially explored.

ONCE UPON A TIME frequently tries to strike a balance between serving the fairy tales it chooses to cover and its main cast. The back story in “Ariel” says something about Snow, but it is mainly a set up because Regina needs Ariel going forward. As such, it doesn’t really serve Ariel as much as it might.

Regina leaves the group when they take yet another side path on the way to saving Henry and finds Rumple (Robert Carlyle). Is it a little convenient she comes across him so easily? To be sure. But we now have “the heroes” and “the villains” as two separate groups working towards the same goal. This should make the next few episodes even more interesting, though I hope they combine forces in the end to defeat the evil Peter Pan (Robbie Kay).

Regina thinks that she knows Rumple, speaking of his strong sense of self-preservation, yet, I don’t think she knows him as well as she believes. Yes, Rumple is less eager to sacrifice his life than he was when he got to Neverland, but that’s because he finds out Neal (Michael Raymond-James) is alive, not because Rumple loses his nerve. There is still a chance at redemption for Rumple, and even as his own son rejects him, Rumple has the opportunity to win him back, at least a little, by being noble. Sticking with Regina, while creating a very powerful and entertaining twosome, might be a step backwards on that mission.

It’s very interesting that Belle (Emilie de Ravine), who has appeared to Rumple for the past several episodes, is actually Pan’s shadow. I wouldn’t put it past Pan to try something so devious, of course, but what does Rumple think Belle is? Does Rumple really believe he’s hallucinating? At first, the Rumple / Belle conversations seem sweet and a good plot device, but now that Regina has exposed Belle’s physical manifestation and the trick, it makes me wonder about how sharp Rumple still is and how vulnerable he may be. Something is wrong with him that he fell for this, which seems a tad out of character.

Across the island, Emma (Jennifer Morrison), Hook (Colin O’Donoghue), Snow, and Charming (Josh Dallas) must spill their secrets in order to rescue Neal from the Echo Cave. It’s a great device for ONCE UPON A TIME, forcing hidden things to come to light, and it’s brilliant for Pan, who wants to create divisiveness in the group, preferring to win the game by setting the others up to lose through their own actions, not his. What happens in the cave will have impact far beyond “Ariel.”

Emma and Neal have find each other again and confess their love for one another, but they aren’t together. Emma is still hurt by him, and while Neal can offer explanation for abandoning her years ago, he cannot heal her pain so easily. One might think losing Neal, whom Emma thought was dead, might make her reassess and forgive, but her admission that she hoped he was dead proves that isn’t the case. She is too deeply broken to move past this quickly, and it’s good the show doesn’t try to do that. Thank goodness Neal is willing to be the patient one, because Emma just needs more time.

This does allow an opening for Hook, who admits Emma has helped him finally get over his last love, but also sets Hook up for disappointment. Should Hook even try to move in, having heard Emma and Neal express their feelings out loud? He is clearly the third wheel, but his affections are real, too. Will he gallantly step aside? Will he redouble his efforts? Will he be angry at Neal, someone Hook is clearly fond of, too? Emma may not be Hook’s next romance, but now that he has moved on, might that leave him open to someone new, or will he obsess?

While a love triangle can never truly by a fresh story element, “Ariel” makes it more complex and intriguing than most, and leaves the door open for development that could go in multiple directions.

Charming and Snow have bigger problems. She wants a baby, which has to be painful for Emma to hear, considering that Emma is the daughter that Snow and Charming left on her own, inadvertently or not, though Emma has a lot of other things on her mind at present. More importantly, though, Charming must admit he can’t give Snow what she wants because he’s stuck in Neverland due to an injury he lied about. Suddenly, there is a large chasm between them.

Will Snow be willing to stay behind with Charming, thus ending their time as main characters on the show? That wouldn’t be so bad, since they’ve been the most boring of the central cast since the beginning. Or, more likely, will they find a way for Charming to get back to Storybrooke? With their home in the Enchanted Forest mostly destroyed because of Regina’s curse, the couple’s future is uncertain anyway. Why not build it here, though that would mean giving up other family and friends?

Of course, first Snow must forgive Charming for his lie. He hid the truth for the right reasons, but he was stupid to do so in the first place, and Snow has every right to be mad. She’ll forgive him eventually, though, so let’s hope their rift doesn’t drag on too long.

“Ariel” is an excellent episode mostly because of the Echo Cave, which really lets the series dig into the personalities of its players. There are weaknesses in story structure but not in the way the actors handle their roles, or the doubts and complexities of the parts. This makes it easier to overlook the flaws in the writing, much more so than when the strengths and weaknesses are reversed.

Next week, we finally return to Storybrooke, which viewers have not seen since last May!