ONCE UPON A TIME Recap Season 3 Episode 14 The Tower 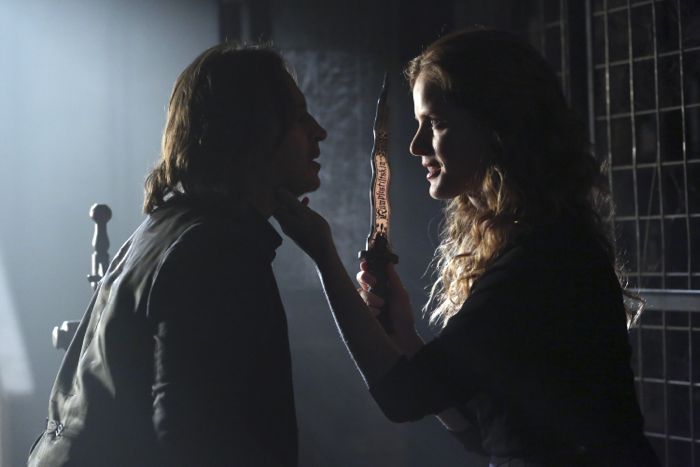 ABC’s ONCE UPON A TIME delivers a weaker installment than most this week in “The Tower.” There are some excellent character moments, especially for David (Josh Dallas), who is at the center of stories both in the fairy tale land nine months ago and in present day Storybrooke. But there are also glaring flaws, plot points that the writers didn’t seem to take the time to consider at all, leaving fans with a vague feeling of disappointment as the close of the hour.

In “The Tower,” David is forced to confront his deepest fears. This begins in his castle in the Enchanted Forest, where he dreams of Emma (Jennifer Morrison), a grown princess, who suddenly turns dark and blames him from destroying her life. This is a really cool scene, a vision of Emma that has never been realized, but could have been. No sooner does she tell him not to screw up the next one then David wakes up to find Mary Margaret (Ginnifer Goodwin) revealing her pregnancy (as if everyone couldn’t tell by sight; the show doesn’t do well at hiding Goodwin’s baby bump.)

It’s no surprise that David is scared of being a bad father. He certainly did not do right by Emma, and while he had to do what he thought was necessary at the time to save her and their world, he has regrets. So he sets off to find a cure for those negative, nagging voices in his head, a root that Robin Hood (Sean Maguire) tells him about.

The Rapunzel story doesn’t do much for the girl at the center of it (Alexandra Metz, Chicago Fire), and the conclusion, where her parents just happen to be waiting for her at David’s castle, is hokey, but it does help highlight David’s emotional state. Rapunzel is trapped by a witch, but it’s not a real witch, simply a manifestation of her own hesitation about being a leader in her kingdom. And David does what he does best, helps someone find the stronger part of themselves, so Rapunzel defeats the witch. Though it is worth noting that David never even circle the tower looking for a way in, so how smart a hero is he really?

David is great at helping others, but so much at helping himself. Zelena takes advantage of that in Storybrooke by secretly feeding him some of Rapunzel’s root, which leads to David facing off in the woods against himself, or more specifically, the doubts that he can protect and take care of his family. David eventually overcomes this, of course, but Zelena achieves her goal – obtaining a sword fragment that holds David’s courage. Is David now the Cowardly Lion?

I do like how “The Tower” highlights both David’s weaknesses and the problems he has in dealing with them. I think he defeats that enemy a little too easily, which is part of the inherent problem with David (and Mary Margaret) in the first place – they are just too perfect. Still, it’s nice to see him struggle internally for a bit before winning the day, as we all know he will.

This also gets into Zelena’s head space a little more. At first, it appears she’s just trying to distract David and the others as they put together some (way too conveniently placed) clues that lead them to her farmhouse. She’s already moved sensitive, um, material from the premises, but at no point does it appear she has been taken by surprise. She knows what she is doing.

Early in the episode, we see Zelena (Rebecca Mader), a.k.a. The Wicked Witch, shaving Rumple (Robert Carlyle) with his dagger. Forgetting for a moment that the blade looks far too dull to do the fantastic job it seems to do, and that even the parts of Rumple’s face she doesn’t touch seem cleaned up, it’s a terrific scene. The tension between these two fine performers is excellent, Mader showing us her power, and Rumple exposing his vulnerabilities. We finally start to see why Rumple is back, and definitely find out that he’s under Zelena’s control, which is not a good thing. Though now that the good guys know about Rumple, it may even the playing field just a bit.

It still isn’t clear what Zelena’s ultimate goal is and how she plans to use Rumple to accomplish it (or Neal, for that matter, who is still MIA this week). What we know is she is several steps ahead of our heroes, having carefully planned a multi-step scheme, and she appears to still be on schedule in carrying it out. Every step closer they take to exposing her seems to be little bread crumbs that she means them to find.

There’s also a really sweet scene in “The Tower” between Regina (Lana Parrilla) and Henry (Jared Gilmore) in which Henry confesses some things about his mom, and Regina assures Henry that he will have family one day. It’s clear the two share an instant connection, which has to be gratifying for Regina, who still pines after this lost son, even if Henry doesn’t understand who Regina really is to him yet. I look forward to Henry getting his memories back because he is definitely lacking something valuable, not being able to fully appreciate having Regina in his life.

The scenes like the one mentioned above and the moments where David fights himself are terrific. It’s too bad the shaving and the berry clues and the lack of tower investigation and other small moments drag this episode down. When ONCE UPON A TIME is great, it’s great. It’s rare for it to have such unevenness nowadays, something rampant in the show’s early installments, but mostly filtered out by now. Hopefully, it will get its act together by next week.

ONCE UPON A TIME Episode 3.15 Promo Quiet Minds