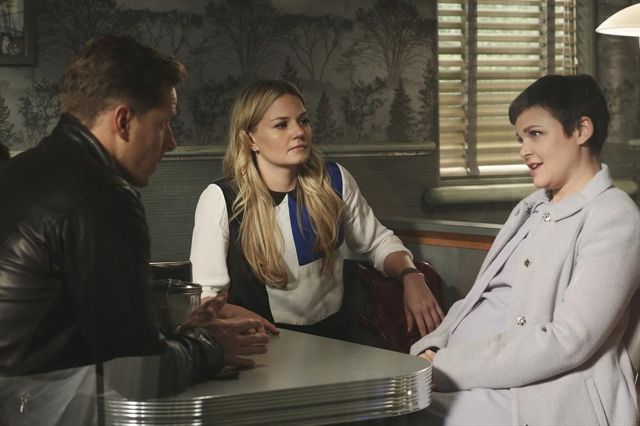 This week’s episode of ABC’s ONCE UPON A TIME, “Witch Hunt,” immediately rips away some of the mystique surrounding what we assume is this half-season’s big bad: the Wicked Witch (Rebecca Mader). We start getting clues about her early in the episode, learning she can circumvent Regina’s (Lana Parrilla) blood magic, so by the time that the Wicked Witch drops her bombshell – that she is Regina’s sister, or more accurately, half sister – it’s not that big a surprise. But that doesn’t lessen the tension between the two and the excitement for fans.

It shouldn’t be shocking that the Wicked Witch is related, anyway, because of ONCE UPON A TIME’s penchant for making all of the major characters kin. Last fall’s villain was Rumplestiltskin’s father, and the vast majority of the full-time players are connected by blood or marriage. This latest development just branches the family tree out a little bit further.

Of course, Regina isn’t the Wicked Witch’s only bond to our cast. She, too, was trained in the magical arts by Rumplestiltskin (Robert Carlyle), and is supremely jealous of the roles both Rumple and her and Regina’s mother, Cora, played in Regina’s life. The Wicked Witch is the abandoned sister, the one left to her own resources in a far-off land, and she wants revenge.

This is the set up for a delicious war. Regina has been slowly turning good, working with our heroes, and that’s a welcome thing. But it’s also nice to see Parrilla play the darker side of the rich character, and by bringing in someone she can do battle with while not losing her positive status, exercising her great powers of destruction once more, they should give us one heck of a spring season.

The Wicked Witch has her own secrets. She has a resurrected, and one again crazy, Rumple locked in her storm cellar (where else?). Her flying monkeys are like werewolves, able to turn Storybrooke residents into more of their kind, a fate that befalls Little John (Jason Burkart) and possibly some dwarves. And the witch seems to know something about the baby in Snow’s (Ginnifer Goodwin), which she takes far too great an interest in. All of these things make her very dangerous, largely because of what the rest of the characters haven’t figured out about her yet. Viewers now know who she is, but Regina and the others, their memories of the past year and earlier encounters with the witch wiped, do not.

Besides Regina and her sister’s first conversation in the Enchanted Forest, Regina has many other shining moments in “Witch Hunt.” We see her meet Henry (Jared Gilmore) again, as painful as that is for her, since he doesn’t remember her, and just how depressed she was right after losing Henry, which I guess it now feels like again for her. She and Emma team up to try to figure out who is behind the latest curse, strengthening their partnership even more than we’ve seen before. Plus, sparks are beginning to fly between Regina and Robin Hood (Sean Maguire) when they bond over their children in fairy tale land, a foretold love many are anxious to see blossom.

I’m excited for Regina to have such a large arc in the coming weeks. Parrilla is an amazing performer, quite possibly my favorite on this series, and she captures the subtleties and layers of the Evil Queen in ways that can only be described as magical. There are so many sides to Regina, often overlapping, and Parrilla balances them all with great skill. More Regina can only be good for the series.

It’s also going to be neat to see Rumple in his new old state. Rumple’s story arc had really come full circle and he had a very natural ending in his death last fall. Yet, Carlyle is too valuable an asset for ONCE UPON A TIME to lose. “Witch Hunt” shows us how the writers will solve that, resetting his role, at least for now, allowing him to explore more deeply the parts of him that had been taken away. Cool.

The biggest question hanging unanswered right now, more immediate than figuring out the Wicked Witch’s game plan, is where is Neal (Michael-Raymond James)? The other characters assume he’s become a monkey, but that seems far too simple. One may wonder if his disappearance is connected to Rumple’s reappearance, as that would make more sense.

“Witch Hunt” does well in the larger stories, as mentioned above, but also excels in the little moments. It’s great to see Ruby (Meghan Ory, who has been starring in the new show Intelligence), Archie (Raphael Sbarge), Dr. Whale (David Anders), and others again who have been missing for most of this season so far. The bits where both Snow and David (Josh Dallas) are curious to hear more about what’s been going on with Emma’s love life are cute. Not to mention, everyone seeming to already know much about Oz, including how to possibly kill the Wicked Witch, which surely won’t actually work, is fun.

Basically, “Witch Hunt” is a terrific installment, moving the tale along quite briskly, providing ample opportunity to showcase Parrilla’s massive talents, and even nailing the referential dialogue. It’s near perfect, as far as hours go, not that I’d expect anything less from an episode written by Jane Espenson, as this one is.