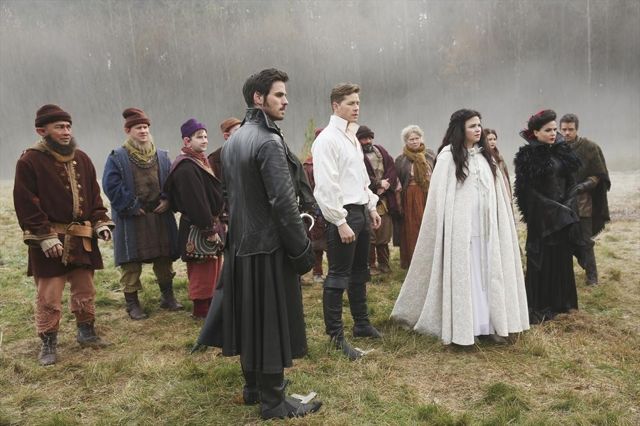 *WARNING: The following contains light spoilers for the mid-season premiere of ONCE UPON A TIME. I tease a number of scenes and plots, necessary because this episode is so different from where we last left the tale, but I refrain from giving away any big twists or surprises.

ABC’s ONCE UPON A TIME is doing things a little differently this year, presenting two mini-seasons instead of a full year’s worth of episodes in a single arc. The fall run took our heroes to Neverland as they sought to defeat the cruel Peter Pan. Now, this weekend, the second half begins with “New York Serenade,” bringing with it a new villain, a new curse, and a new mystery.

“New York City Serenade” jumps back and forth between two settings. One year ago, the residents of Storybrooke returned to the Enchanted Forest. There they encounter Aurora (Sarah Bolger) and Phillip (Julian Morris), then set off to find their castle. Snow White (Ginnifer Goodwin) and Regina (Lana Parrilla) have decided to team up for the good of the realm, but an unexpected attack and a powerful shield spell present challenges they didn’t expect.

One year later, in New York, Hook (Colin O’Donoghue) arrives to convince Emma Swan (Jennifer Morrison) that the life she is living, happy with her son, Henry (Jared Gilmore), and doting boyfriend of eight months, Walsh (Christopher Gorham, Covert Affairs), isn’t real. Emma is resistant at first, having no memories of her time in Storybrooke or among the fairy tale people, but a trip to Neal’s (Michael Raymond-James) apartment and a blue potion are Hook’s plan to fix that.

It seems like every episode of ONCE UPON A TIME named after a place just happens to be good. “Tallahassee” and “Manhattan” certainly delivered, as does this newest installment. Coincidence? Perhaps.

ONCE UPON A TIME often divides itself between flashbacks and the present day. Given the structure of “New York City Serenade,” it seems like the flashbacks in the back half of this third season may only go back a few months at a time. We are left pretty much clueless as to what transpires between the events shown in this hour and Emma’s current situation, even though whatever transpired seems to be very important.

Now, I don’t think that means ONCE UPON A TIME will abandon the longer-ago timeframes completely. But like the series Lost, which shares some writers, showing the past prior to the beginning of the series only works for so long before it needs supplemented with something else. “New York City Serenade” is ONCE UPON A TIME’s Oceanic Six moment, and like those plane wreck survivors, Emma and Henry have to go back. Or, at least, Hook will try to convince them to.

I’m not saying “New York City Serenade” copies Lost, though. The story may even be considered the opposite, with some of the Lost obstacles removed in a single hour, and other, different challenges facing the characters. But I digress.

We do get some really great moments in both realms this week. In the Enchanted Forest, Regina and Snow have a really cool scene in which Regina is considering her path, whether to try to cope with the pain of loss, as most people do, or follow her mother’s evil path. There’s another terrific, similar bit involving Hook and Charming (Josh Dallas). Belle (Emilie de Ravin) and Neal share their thoughts about the departed Rumplestiltskin (Robert Carlyle, who does not appear this week, but remains on the cast list). And, what may be best of all, is the part in which Regina, Snow, and the others encounter Robin Hood (Sean Maguire) and his Merry Men, a sequence sparking with chemistry and fantastic dialogue.

There are equally memorable moments in New York between Henry and Emma and between Emma and Walsh. Emma and Henry in their current state, thinking they’ve always been together, have an enhanced relationship based on what was already established for them, making for a neat bond. Walsh, on the other hand, is easily accepted by Henry and he knows and loves Emma, despite her flaws. Emma is fond of him, too. If you’re wondering what kind of guy Emma and Henry could let into their family in such a short time, Walsh is exactly who you’d pick.

Of course, this being ONCE UPON A TIME, there are some really surprising developments, especially late in the hour. All is not as it seems in either setting, and viewers will be left with far more questions than answers. Suffice it to say, the writers have taken advantage of the two-story season and have cooked up something really cool and different for this second arc, serving the characters we love, but not repeating themselves in any way.

This episode is not perfect. Jiminy Cricket has resorted to chirping, presumably because Raphael Sbarge, the actor who plays him, wasn’t available. I also wonder how Emma and Henry can have such a fully furnished and decorated apartment one year after they “lost everything in a fire.” But these are minor gripes, and no glaring missteps stick out.

In short, “New York City Serenade” is an enjoyable, exciting episode that makes a fine return for ONCE UPON A TIME. The series airs Sundays at 8 p.m. ET on ABC.