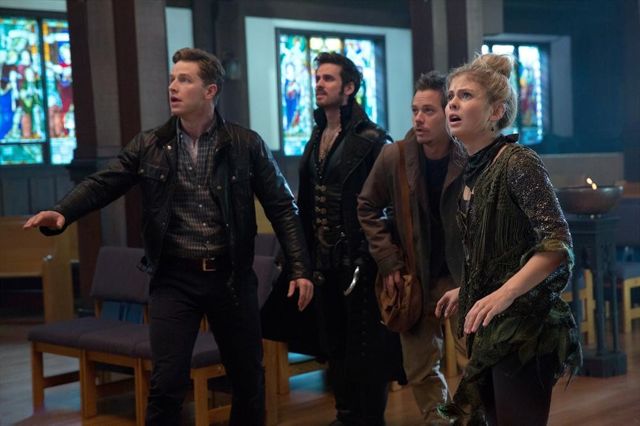 ABC’s ONCE UPON A TIME is “Going Home” in the midseason finale. Pan (Robbie Kay) unleashes his curse on Storybrooke, which will wipe everyone’s memories and allow him to build a town full of people suffering at his hand. As the others race to stop him, it soon becomes clear that the magic required to defeat the villain will come with a very steep price, and the sacrifices must be made by those who, in the past, have seemed least likely to put others first.

It’s a surprise when Pan kills Felix (Parker Croft). It shouldn’t be, as we’ve seen that Regina (Lana Parrilla) had to murder her own father to enact the first curse. But for some reason, it comes as a minor shock, perhaps because Pan doesn’t telegraph it all. Nor does Pan seem to love Felix, which makes him feel like an unworthy sacrifice, but since Pan loves no one, I guess Felix is the closest person in the world to him. Which means Pan would rule the new Storybrooke completely alone. I wonder if he would cope with it better than Regina did? Probably.

Not that Pan gets the chance to find out. Rumple (Robert Carlyle) has a semi-complicated plan. They must get the black fairy’s wand (who is she and why haven’t we seen this character before?) to switch Henry (Jared Gilmore) and Pan back to their bodies, then Henry can bring the curse scroll to Regina to destroy. No one worries that Henry will suddenly be by evil Felix’s side when the swap occurs (thankfully, Felix is dead by that point, but they don’t know that), and not a single character asks Rumple ahead of time what the price may be, even as Rumple warns them about the cost (why not?).

The wand proves difficult to come by as Pan’s shadow guards it and hovers above where Neal (Michael Raymond-James) can use his coconut to nab it. Cue Tink (Rose McIver) believing in herself enough to reactive the pixie dust and fly up. It’s a simple solution that seems a little too easy, but it’s a story point that has to happen for Tink, so that’s excusable. Then Tink kills the shadow, which seems a little out of character, since up until now, we haven’t seen our heroes execute the bad guys, though Tink isn’t exactly the pure moral soul that Snow (Ginnifer Goodwin) is.

Somehow, killing the shadow brings Blue (Keegan Connor Tracy) back from the dead. Does that mean others the shadow has murdered are alive again, too? Will there be any implications from this (probably not)? We have to have Blue remain in the show because she ties into everything and gets to give Tink back her more-than-earned wings. But I’m not completely clear on this plot point.

Then, Rumple uses the wand to make the body switch, putting the magic-blocking cuff on Pan. This proves ineffective, as after everyone leaves Rumple around with his father, Pan wakes up, declares he made the cuff and is thus immune to it, and slaps it on Rumple. Rumple is a very smart man, and while we know Pan is devious to be steps ahead, does Rumple really think it’s enough precaution just to put a cuff on Pan, with no other back up? No wonder Rumple gets his butt kicked.

However, right after that we get the most emotional scene in “Going Home.” With a frozen Bae, Belle (Emilie de Ravin), and others, including the entire main cast, looking on, Rumple has his shadow return the Dark One’s dagger to him and uses it to kill both himself and his father. It’s the ultimate act of redemption, a hero’s death, and everyone is affected by it, even Hook (Colin O’Donoghue). And thank goodness Rumple doesn’t cut off his arm, which is what his first though appears to be after being cuffed.

Many fans think that Rumple is not really dead, and that could be; he disappears in a puff of smoke. But if he is alive, does that mean his father, Pan, now reverted to the older form of Colin (Stephen Lord), is alive, too, to cause more trouble? And if somehow only Rumple survives, is he no longer the Dark One? And how will his friends and family see him differently, since he sacrificed himself for them? Whatever happens, whether Rumple is dead or alive, this teary scene should definitely have ripples later in the story.

With Pan gone, the only thing to do now is to stop the curse. Regina reveals that means everyone is “Going Home” to the Enchanted Forrest, with Storybrooke never having existed, including in Henry’s memories. See, Henry was born in the real world, so even though his parents both hail from fairy tale land, he can’t go back with them, nor remember Storybrooke at all. (So he’s an anchor baby? That doesn’t quite add up to me). Emma (Jennifer Morrison), being the Savior, is a loophole in the curse, so she can stay with Henry under the same restrictions (OK, this does make sense). Regina offers them nice, false memories of a happy life together to fill the gap.

This is almost as big a moment of redemption for Regina as Rumple’s scene is for him. She has to give up the thing she loves most – Henry – sacrificing her own happiness. However, she does it directly for her child, so one could argue a small bit of selfishness, too. Still, it’s awfully nice words that Regina says to Emma upon their departure, and it solidifies the change that ONCE UPON A TIME no longer has a villain in the main cast, no matter what Regina and Rumple call themselves in the end.

The goodbyes for everyone, who have time to gather and walk to the town line, even though Grumpy (Lee Arenberg) already told them the curse was coming from all sides in a panic-stricken tone, are heartfelt and sad. Emma is losing the family she always wanted, and even though she gets to keep Henry, it’s not enough. At least Snow, Charming, and the others will remember Emma, but it’s not a two way street. Neal pledges to find them again, and of course, someone must, or the series would cease to be what it is.

But it’s not Neal who shows up at Henry and Emma’s door in New York (why not Boston?) one year later. It’s Hook. Since Emma doesn’t remember him, and she’s not in love with him so his unwanted half-kiss does nothing to bring back her memories, he definitely has a hard task ahead. That’ll be for the back half of the season, though, so nothing to do now but wait for February.

“Going Home” has flashbacks, as most other episodes do, but instead of telling a complete tale, each scene follows a different character. All of them except the one where Snow gives Henry the fairy tale book give a little insight and are nice. My problem with the Henry one is where did the book come from and why does Henry see Mary Margaret as Snow immediately and how come he immediately leaves town to find Emma that very same month? It doesn’t take him any time at all to figure things out?

As you may be able to tell from my review, there are plenty of holes that can be poked in the plot of “Going Home.” Yet, while watching, it’s a highly enjoyable episode. ONCE UPON A TIME hits the emotional beats right, it just doesn’t always deliver the most cohesive story, with things not quite making sense. If only they would think through the scripts a bit more to eliminate some of those flaws, that would raise this show from a pretty good one to one of the best. It’s just not there yet, and after two and a half years of very slow improvement, it probably always will be B-level, never A.

I still like it a lot, though. There are great questions left to ponder over the break. Will Hook be in a better position to capture Emma’s heart if he’s the one that ultimately leads her back to her family, setting aside their false start? How will the Storybrooke residents adjust to being home? How long will there be two separate settings? Did the writers lie about the Storybrooke / Enchanted Forrest format (seems so, and that’s fine)? Can Emma please recover her memories quickly once reunited instead of another long adjustment period where she doesn’t believe what’s happening (though now that she’s had the love of Henry, she may not be so jaded)? And how does new-baddie the Wicked Witch (Rebecca Mader, Lost) and her land of Oz come into play?

ONCE UPON A TIME returns in a couple of months and will air without reruns through the spring.

Box Office Results For The Weekend Of December 22nd 2013