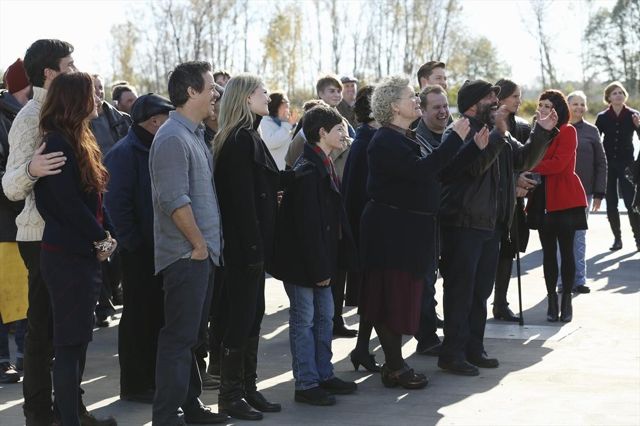 In last night’s installment of ABC’s ONCE UPON A TIME, our intrepid heroes return to Storybrooke, seemingly triumphant. Warm reunions abound as everyone is glad to find their loved ones safely returned. But all this threatens to unravel when it becomes clear that Pan (Robbie Kay) is not trapped in Pandora’s Box, as they believe, and has a very terrible plan to make “The New Neverland.”

The hugging scene on the dock is a little cheesy, but it’s been earned after the long absence. Rumple (Robert Carlyle) gets to be back with Belle (Emilie de Ravin), and that alone calls for a little schmaltz. Ariel (JoAnna Farcia Swisher) finds Eric (Gil McKinney) in what looks like a close of their story, and similarly, Wendy (Freya Tingley) is back with her brothers.

The one completely inexcusable thing about this sequence is that no one keeps an eye on Felix (Parker Croft). They know he’s bad, and sure enough when “Henry” (Jared Gilmore) asks the grownups what should be done with Felix, they toss him in a cell. Why isn’t he bound or guarded before this? There is ample opportunity for him to slip off into the crowd, which Felix doesn’t do because he’s waiting on orders from Pan, but no one else knows this, or even wonders why Felix doesn’t flee.

No one is happy to see Regina (Lana Parrilla). Snow (Ginnifer Goodwin) makes sure to publicly note Regina’s help, as relations between Regina and the main characters have thawed a bit, but that doesn’t send the townspeople into her arms. Regina is alone, which is why Pan (as Henry) finds it so easy to fool Regina, playing upon that sense of isolation and telling her exactly what she wants to hear  –  that she is loved by the boy she raised.

Now, the real Henry does care about Regina, and after hearing of her doubts late in the hour, he gives her a hug, proving that Pan’s lie isn’t without a grain of truth. But Henry also has Emma (Jennifer Morrison), Neal (Michael Raymond-James), and assorted grandparents. Will there be enough room for Regina in his life to satisfy her, especially when she has no one else?

It’s time for Regina to find love. I don’t think she’ll go evil again, nor will Henry turn his back on her once more, but she will not be able to move forward without someone else. This will most likely be a romantic partner, though it doesn’t necessary have to be. But it’s definitely time for Regina to be truly appreciated and valued. She deserves it.

The Henry-shaped Pan tricks Regina because she has all the magic, which is the power he needs to enact his plan of reviving the curse, wiping everyone in Storybrooke’s memories and creating himself a new place to rule over. Pan finds Regina’s weakness and exploits it, which actually makes it seem a bad thing that Regina isn’t cold any more. Luckily, this should be a temporary viewpoint.

Pan’s biggest enemies in Storybrooke are anyone that can do magic. This list would include Regina, Rumple, Emma, and Blue (Keegan Connor Tracy). He can’t take them all out at once, and doesn’t need to. Subduing Regina, he is able to get away with what he needs from her vault. He also kills Blue, perhaps because she always seems to know what is going on, and in doing so, stops the one person who can restore Tink’s (Rose McIvers) wings, an occurrence that would give Pan yet another enemy with magic.

Blue’s death is very anticlimactic and not nearly important enough for someone who has been such a vital character. Though never a member of the main cast, Blue is involved in most characters’ stories in one way or another. She should not be able to be taken out so easily, as logical as her demise would seem for Pan’s plan. Which is why I won’t be convinced she’s really permanently dead unless she remains so after next week’s episode. Or unless McIvers signs a deal to stick around for awhile, effectively replacing Blue. (Personally, I feel those room for both in the story).

I assume Tink will be instrumental in saving the day in next week’s fall finale. Otherwise, why bring up her lack of belief in herself or her inability to make the pixie dust glow again in “The New Neverland?” Presumably, she is being set up to find her way on her own, and she’ll be able to step up and lend a hand. ONCE UPON A TIME wouldn’t let a recurring character be the ultimate savior, that’s Emma job, but she should be helpful at a key moment.

In flashback, we see Snow just after her wedding. As much as Charming (Josh Dallas) begs her to just appreciate their moment of happiness, Snow cannot bring herself to do so, worried that the Evil Queen will attack. Charming points out that there will always be danger and they just have to live in the moment, but Snow resists. That is, until a close brush with death at the hands of Medusa opens her eyes.

This may seem like a weird time to visit the seemingly unconnected back story, but it does have an important connection to the present day events in “The New Neverland.” Emma is a like her mother, something we don’t get a lot of chance to see, but is very evident with this bit. Neal is trying to get back together with Emma, but Emma resists because she feels she can’t take the time to just be happy. Hopefully, she will soon learn the same lesson Snow did.

And what of Hook (Colin O’Donoghue)? Many will surely be disappointed when Hook promises Neal to back off of Emma. Yet, he’s clearly still into Emma, and even tries to use Tink to make Emma jealous. Will those Hook / Emma shipper fans get a chance to see the two together? Signs point to yes, at least for a little bit.

While I do have a couple of small plot complaints above, what I am most disappointed in is the way Kay plays Henry and Gilmore plays Pan. I can tell they’re trying, but, for me at least, I’m just not seeing the actors in the other characters’ shoes. They still seem a lot like their own parts, just with different dialogue and an extra face or two. Kay, in particular, maintains some of Pan’s mannerisms. Now, this can all be explained away as muscle memory or something in the bodi, but I really wish this particular element came through better.

Next week, excitement will definitely build as the final showdown with Peter Pan plays out, with the very fate of Storybrooke on the line! ONCE UPON A TIME airs Mondays at 8 p.m. ET on ABC.