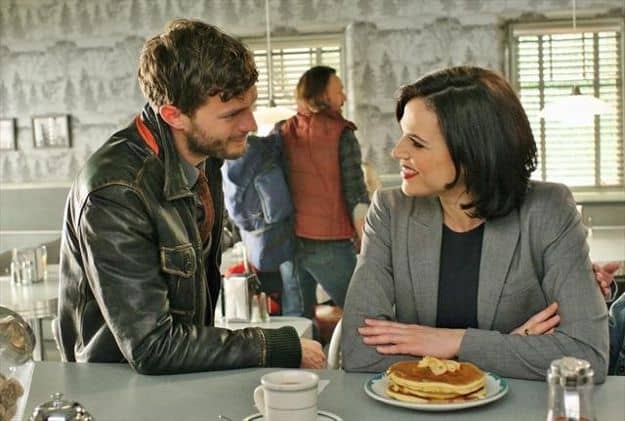 ABC’s ONCE UPON A TIME takes us back to the beginning this week with “Welcome to Storybrooke.” As Regina (Lana Parilla) plots to force Henry (Jared Gilmore) to love her by magic, a spell that requires Regina to kill Snow (Ginnifer Goodwin) in the process, we see the earliest days of Regina’s curse, when she first brings her world into ours, and the issues that arise when two strangers visit the town.

After last week, it’s easy to think that Regina’s path to redemption is closed, and she will be completely taken over by evil. But unlike her departed mother, Cora, Regina still has her heart in her chest, and as long as it’s there, there is always a chance that she can allow it to rule her again. Not a big chance, mind you, but a chance, and we see this in the parallel stories taking place in the past and the present.

In both time frames, Regina is desperate and angry. In the past, she is mad because even though those she hates aren’t happy, neither is she. They are oblivious to their situation, and so not suffering as she’d like them to be. Everything in town is boring and the same every day, and she isn’t hailed as the ruler she will assume she will be, even in the job as mayor. In the present, Regina’s problems stem from Snow’s murder of her mom, and the fact that she has lost her son to his birth mother.

Each time, a boy is the one who saves her. Henry convinces her not to kill Snow in the present after she finds him with dynamite at the well. Blowing up the well would harm him, not end magic, and she is willing to stop her curse if it keeps Henry from being injured, as she truly does love the boy she raised as her son. In the past, she stops short of forcing a lad named Owen (Benjamin Stockham, 1600 Penn) to stay with her when she sees the pain it will cause him, showing tenderness again.

But I’m getting slightly ahead of myself.

“Welcome to Storybrooke” starts with a father, Kurt (John Pyper-Ferguson, Caprica, Alphas), and his son, Owen, camping in the woods in 1983. Regina’s curse roils through the forest, and the pair are left in a destroyed campsite, their truck crushed. They wander into the town that has appeared out of thin air, and encounter Regina, who is taken with Owen when he offers her a bit of kindness. She decides this will fill the gap in her life, so she tries to force them to stay. She ends up letting Owen go when she sees he won’t love her, but she has Sheriff Graham (Jamie Dornan) arrest and keep Kurt.

Even in this kindness, letting Owen go instead of locking him up as a prisoner, she still lets the darkness creep in. Only someone evil would keep a kid’s father in jail for no reason, especially knowing Owen’s mother is dead. All of these years, presumably, she’s had Kurt stashed away somewhere, leaving Owen on his own. No amount of redemption in small acts will make up for what she has done in his eyes.

And now, Owen has returned in the present, grown up and going by the name Gregory Mendell, the mysterious stranger that has been in Storybrooke recently. He manages to re-enter the town, even though it appears hidden from the road, and while he doesn’t seem evil, he is certainly back for revenge and to find his dad, whom I hope is still alive.

It’s interesting how the real world and the magic world deal with their problems differently. Gregory is making videos of magic to take back to the public, one can assume, and expose the town. Regina and Snow’s family are prepared to kill one another. There is definitely a different level of danger presented, and one way is much more permanent and harsh than another.

Which just goes to reinforce ONCE UPON A TIME’s theme that magic has its cost. Only Henry sees this, of all the characters that recognize the differences between the two worlds, and begs the adults to get rid of magic, rather than resort to execution. Regina is unwilling to do so because she can’t stand to lose her power, which would leave her defenseless and unable to influence others. I’m not sure the good guys have the ability to take away magic altogether, but neither do they seem all that enthusiastic to try, since magic has been part of their way of life for so long.

Snow is suffering quite mightily over her recent use of magic to kill Cora. She sits and stares out the window, unable to live with what she has done. She even goes to Regina and asks that Regina kill her. Regina considers it, but after ripping out Snow’s heart, she sees the blackness growing within and decides it’s better to let Snow suffer, slowly ruining herself, and so Regina puts the heart back.

One wonders if Regina’s heart looks like the polar opposite of Snow’s, black with a hint of red trying to take hold, or the red ember struggling not to die out amid the black smoke. Is there any hope for Regina? Or is Regina right that once the black infects the organ, the situation is hopeless? Maybe Regina has to believe that, rather than face the truth that her soul is lost.

I don’t think that Snow will lose herself completely. The black is a small part of her, and while it’s horrible that she experiences this, she has no intention of acting in a similar manner again. She’s so desperate to be rid of her darkness that she approaches Rumple (Robert Carlyle), of all people, for help, asking him how he lives with his own misdeeds.

Rumple’s response, tell yourself that you did the right thing until you believe it, isn’t the right one for Snow. After all, following this advice has only led Rumple to make the same mistakes over and over again. Snow needs to remember this time and how this feels, so the next time she is not tempted to repeat the mistake again. By doing that, knowing that she isn’t a bad person and won’t do evil things, then she may be able to begin to live with herself.

Rumple’s anger and feelings that he does not need to help Snow and her family, only doing so out of reluctant obligation and in the hopes that it will settle their score, sucks. He has a family again now, being connected to them through Henry. Family is what can help Rumple save himself. He needs to stop fighting it or acting like he doesn’t know how to be part of the group. It’s the only way he will be able to keep his son and his love in his life.

I absolutely adore the part of “Welcome to Storybrooke” when Emma (Jennifer Morrison) scolds Neal (Michael Raymond-James) for not realizing that Henry takes his backpack with him to the bathroom. Her accusation of “He’s your son!” gives us a glimpse of what parts of Neal Henry has inherited, and the scene is sort of a callback to the Neal / Emma flashback episode, when we see them as con artists. Fantastic!

“Welcome to Storybrooke” is a terrific tale that fills in some important holes in the past, shows us Storybrooke at a time we’ve never seen it before, answers some major questions that have been posed this season, and provides a showcase for the immense talents of Lana Parrilla, which is always welcome. Plus, even though his role is small, it’s terrific to see Sheriff Graham again. It’s a great, memorable installment!