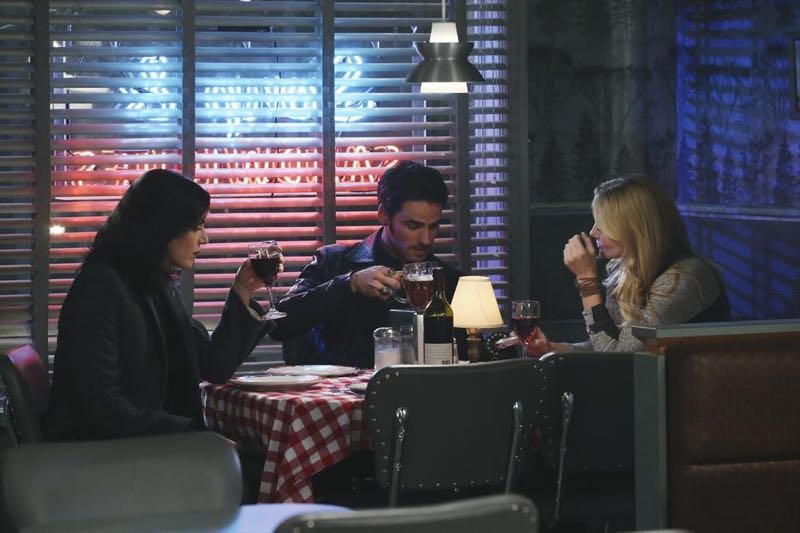 It is a slippery-slope to have magic and not use it for purely selfish reasons.  In fact, it has been quite a struggle for both Regina (Lana Parrilla) and Mr. Gold (Robert Carlyle) over the years to think of others before their own happiness.  But in light of seeing how the heroes are rewarded for their selfless hearts and desire to help others, and yearning for their own happy endings, it has given both Regina and Gold incentive to try to turn away from the darkness and use their magic for good.  Alas, Regina’s destined true love has left Storybrooke and Gold was banished from Storybrooke, and it makes them question if they are doomed to live without their happy-endings.  So with the revelation that there is a mysterious “author” out there who seems to have the ability to guarantee a happy-ending, both Regina and Gold are racing to be the first to find him in order to secure a better fate.  Who will find the Author first and will that be enough? That is the question the rest of Season 4 seeks to answer.

During a recent special press screening, creators and executive producers Adam Horowitz and Eddy Kitsis talked about what is next for the heroes and villains of ONCE UPON A TIME.

Choosing the Queens of Darkness
EDDY: Maleficent (Kristin Bauer von Straten) was previously on the show and we always wanted to get back to her, which is why we never fully killed her. Ursula (Merrin Dungey), we kind of set up a little bit and teased in the Ariel episode, and we think she is a lot of fun. And Cruella (Victoria Smurfit), we just liked her. There’s a sass to her.  What we wanted was for Gold to take the lesson of the heroes who always worked together, and realized he needed to work together with the villains. So we just loved the idea of a “Team of Evil.”
ADAM: And when you watch, you will see that there’s a connection between all of them and between our characters that is starting to unfurl in the first two episodes.  Hopefully, that will make it clear why those three in particular.

Ursula and Cruella In New York
ADAM: There’s an upcoming episode where all the pieces on the chessboard are laid out — [it explains] who wound up where and why. That will speak to also why these three and how they connected and what they are after together.

The Sorcerer and The Author
ADAM:  What is going on with the Sorcerer and the Author should be revealed pretty early on.
EDDY:  In the second half, that question will be answered, as well as we will meet the Author.

Author Want to Help Villains
ADAM: What the Author wants or does not want becomes very important. Whether or not our heroes and villains will be able to use the Author to get what they want will be one of the central conflicts that unfolds.
EDDY: And taking a step back, it’s not just about finding the Author to get a happy ending, it is finding out what happy endings are for each of our characters. What is Gold’s happy ending? He seems to have had two of them and he blew them. And Regina seems to have an inability to be happy. So there’s an exploration of happiness and what that means to somebody is something we’re also exploring. . .  If there’s anyone on the show who’s kind of gotten the short end of the stick, it’s Regina. She did horrible, horrible things but she has continually done the right thing. She’s definitely somebody who’s trying to redeem themselves. A big question that we’re asking on the second half of the season is: If you do something bad, can you come back from it? Does it make you a villain or can you still be a hero? I think that is a realistic thing. Very few people are good all the time. . . For us, what we really want to explore is: If you’ve done a bad thing can you come back from it?  Can you become the person you want to be even if you didn’t start out that way, and vice versa? What makes a hero and what makes a villain is a point of view? That, to us, was really interesting as opposed to just black and white, like: “I’m good you’re bad and I’m a villain and I’m coming here to do villain stuff.”

Rumple’s Happy Ending
EDDY: Whether he deserves one or not, he’s really going to grab it.

Belle Forgive Rumple
EDDY: She kicked him out of town, so she kind of reached her last straw . . . I would say he has his work cut out for him.

Emma Help Regina Get Happy Ending
EDDY: Absolutely. I’d be so mad if we didn’t.
ADAM:  There’s always an element, with Regina, of coming to terms with what she was and what she wants to be.
EDDY: Regina’s going to have a huge curveball thrown her way this second half.

Magic Corrupts All That Wield It
ADAM:  It is less about what the powers are than how they are used.
EDDY: We have seen Rumple and Regina use their powers to help — be it fighting villains or whatnot — and we have seen Regina rip out the hearts of twenty villagers because they wouldn’t let her know where Snow White was.
ADAM: One of the big themes in the second half of the season that we want to deal with is what makes someone a hero and what makes someone a villain. What the differences are and what the common ground is. . . .  Going into the second half of the season, all of our characters are going to be wrestling with this idea of good and evil, not just in terms of what they’re facing as an external threat, but internally within themselves.

Emma’s Struggle
ADAM: Emma (Jennifer Morrison) has spent a long time in the series being told she is a savior and being told she is a hero, and now she’s going to have to face that it is not as black-and-white as that.
EDDY:  She is beginning to open her heart up.  So for us, it is watching Emma open her heart up even though she is about to find out some really bad information.

Hook’s Journey
EDDY:  We are going to realize that he has some things going on in his head that he is concerned about.

Robin Hood’s Return
ADAM: Robin Hood returns to the world of ONCE UPON A TIME and how he comes back and why and when and where we want to keep a secret for now. But, needless to say, he may have left at the end of the winter finale, but he has not been forgotten. His presence is felt at the start before he’s going to be reintroduced.

Reunion With Regina
EDDY: We are going to answer that question with an entire episode devoted to what happened to Robin Hood (Sean Maguire) when he goes to New York.

Henry’s First Love
EDDY: I think there’s a junior high dance for him at some point. I don’t know if it will be this half of the season. We never know if he’ll run into Gretel at the punch bowl.

Eoin Bailey Back As August
ADAM: You’ll see him in the [March 15th] episode.
EDDY: If you’re searching for the Author, they are going to check in with the guy who rode into town with the typewriter.

Jamie Dornan Returning
EDDY: I would love to have Christian Grey back. In fact, when we were up there filming Episode 13, we got to hang out with him. But I don’t know if you know this, but he’s a huge movie star. And I can tell you that his schedule this year is non-stop. . . Jamie is a great friend of us and family to the show. We love him. If the opportunity was right we’d always love to bring him back.
ADAM: The plan with the Huntsman character was always to kill him in Episode 7 of that first season — a lot of that was really establishing the stakes of the show and setting the tone for what could or could not happen.  We brought him back a few times in flashbacks and we would love to do it again, schedule permitting.

Snow & Charming’s Secret
ADAM: That’s kind of the tip of the iceberg — the secret shown in the second episode.  Our hope is that by the time it is revealed you will see that it really informs who they were in Season 1. . . The goal is to deepen who they are — to show you another layer and why.

To find out what dirty little secret Snow and Charming have that they are desperate to keep from Emma and just how far Gold will go to get his happy ending, be sure to tune in for all new episodes of ONCE UPON A TIME on Sunday nights at 8:00 p.m. on ABC.