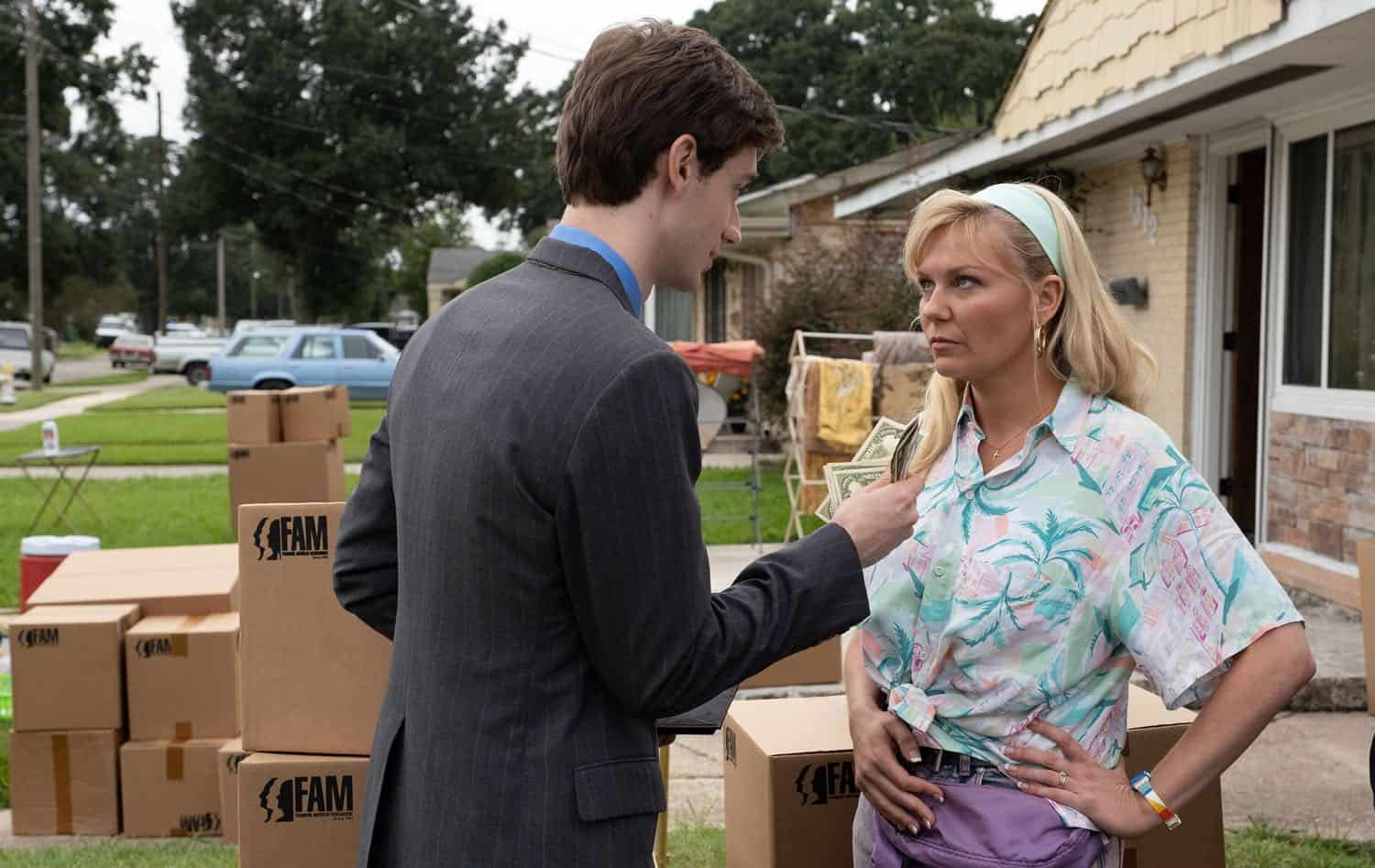 This review contains spoilers for the pilot only.

SHOWTIME’s latest series is ON BECOMING A GOD IN CENTRAL FLORIDA. Set near Orlando in the early 1990s, the series follows a widow whose husband invested heavily in a pyramid scheme, leaving her deeply in debt and desperate to support herself and baby. Can she navigate manipulative individuals and become the most conniving of them all? Or can she escape this life and find normalcy?

ON BECOMING A GOD IN CENTRAL FLORIDA feels very familiar to those of us who have been around a few decades. Amway and other multi-level marketing companies had a big boom awhile back, and some are still around today. There’s also something very specific about the place and time, perhaps more recognizable from pop culture and shared references than reality itself.

Which does not mean the show is a parody of anything. That’s what it might seem at first glance, but it’s far too nuanced, layered, and relatable to dismiss it as just that. The parts referenced above are the comedy part of the premise, but there’s also a deep infusion of drama present.

Chief among the driving emotion is protagonist, Krystal Stubbs (Kirsten Dunst, Fargo, Bring It On). Krystal is grief-stricken and furious at her husband, Travis (Alexander Skarsgard, Big Little Lies), in almost equal parts. This is a man she really loved, but who committed terrible betrayals. This dichotomy is present in Krystal’s interactions with others, bouncing back and forth between being a compassionate friend to co-worker Ernie (Mel Rodriguez, Last Man On Earth), and being a con woman trying to get people to support her financially. She does both very well.

Krystal isn’t Walter White, profiting off the misfortune of others without caring who she hurts. She does show potential signs of such a persona, sure, but we see her desperation as a driving factor that is at times tempered by other motivations. Can we truly villainize someone who has been put in such a bad situation and just needs to be able to afford food and shelter again?

Other characters are less likeable. While the man who duped Travis, Cody (Theodore Pellerin, Genesis), is charming, he’s also fully concerned about himself, only being generous when it benefits him. But is this the folly of youth, achieving something and trying hard not to lose it, allowing oneself to be blinded to those around them because they lack experience? Leader of the whole scheme, Obie Gabeau II (Ted Levine, Monk), seems in a similar vein, hijacking a funeral to protect his business interests, sans the excuses.

But then we’ve got Ernie and his wife, Bets (sing-songwriter Beth Ditto), seemingly sweet and caring neighbors. They aren’t the two-dimensional model of that, despite their naivety; Ernie has already shown hints of mental issues at least partially sparked by an unreasonable boss (Usman Ally, Veep) that will likely pay off down the road. But they do balance the darker aspects of the show.

Heck, even Travis isn’t easy to write off. Yes, he should have communicated with his wife more and not gambled so much of their life away. And yet, the clips of Obie’s tapes that we hear provide insight to how an otherwise reasonable man could be led astray, convinced that what he was doing would pay off big for his family. Travis thinks he’s doing the right thing, and as wrong as he is, his intentions are not bad.

Watching the next few episodes, this is definitely a long-arcing series. So much of what the characters are going through will take quite awhile to play out, and there’s no clear end. Which isn’t an issue, because the characters are complex and interesting, and of course, very well-acted. The show is funny and moving, and it makes a viewer think and consider other perspectives. Yet, it can be taken at face value as entertaining, too, so it doesn’t make you feel like you have to think too hard, even if you’ll be doing so anyway.

ON BECOMING A GOD IN CENTRAL FLORIDA is excellent. I hope you give it a chance. It is currently airing Sunday evenings on Showtime.