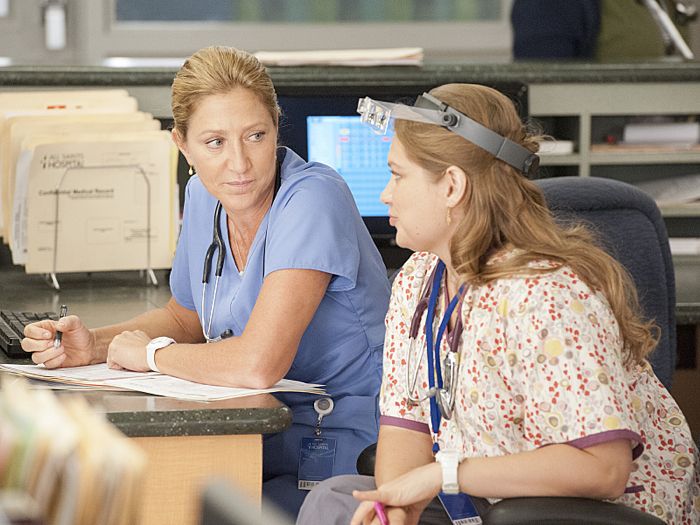 Showtime’s NURSE JACKIE begins its sixth outing this weekend with “Sink or Swim.” Jackie (Edie Falco), I’m sorry to say, is back to her old drug habits again. Unfortunately, whether she’s out of practice of covering for herself, or perhaps she’s just using stronger stuff, she’s not nearly as good at hiding her high as she used to be. This means Jackie is not heading in the right direction.

When NURSE JACKIE began, Jackie handled her drugs. We knew being an addict was bad, but because Jackie never seemed to let it screw up her life, viewers could overlook Jackie’s misbehavior. Eventually, though, it did start getting in the way of her work and her family, and that’s when it had to stop.

Now that Jackie has kicked the habit, it’s easy to root for her beating the addiction, and hard to see her succumbing to her old ways. There are negative consequences right out of the gate for Jackie’s slip. This is a destructive habit, and if Jackie can’t get her act together, she’ll lose everything she’s still working hard at putting the pieces back together for.

Jackie does have a new ally in “Sink or Swim.” She meets a woman named Antoinette (Julie White, Go On, Alpha House), a Southern spitfire who wants to be Jackie’s sponsor. Antoinette is opinionated and pushy, but maybe Jackie needs someone like this. I think once Antoinette becomes aware of Jackie’s relapse, and she seems sharp enough to notice strange behavior, she might be someone who can actually get through to Jackie and push her onto the correct path, whether Jackie wants to get clean or not.

I also have hope that Antoinette can be Jackie’s new bestie. With O’Hara (Eve Best) officially gone from the cast, Jackie is in need of a friend. Zoey (Merritt Wever) would love to be that person, but Jackie always keeps Zoey at arm’s length. Antoinette seems like someone who could break through Jackie’s defenses. Plus, I love White already. I look forward to seeing their relationship develop.

Of course, Jackie is far from the only imperfect one in NURSE JACKIE. Her daughter, Grace (Ruby Jerins), is following in her mother’s substance-abusing footsteps. Cooper (Peter Facinelli), plagued by feelings that he hasn’t accomplished what he wants to by age 40, is tempted to reunite with Roman (Betty Glipin), a woman who is nothing but trouble. Despite the hospital’s disapproval of employee relationships, Zoey and Prentiss (Morris Chestnut) aren’t staying away from one another, either. Eddie (Paul Schulze) is sleeping with some age-inappropriate women.

Jackie could possibly right some of these wrongs if she wasn’t so distracted. Coop tries to talk to her, but Jackie blows him off. And Zoey is practically begging Jackie to ask about Prentiss, but of course Jackie resists, never one to get involved in other’s business if she doesn’t have to.

The dynamic of this cast is a great one, and that’s despite the fact that they aren’t all in one another’s person lives too much. The workplace chemistry is nearly perfect, the varying personalities all interplaying in interesting ways, still managing to seem fresh six seasons in. Though part of that could be the revolving cast, it’s still impressive that NURSE JACKIE avoids any weak links, year after year.

“Sink or Swim” does a fine job of not only catching us up with all of these players, but also setting up the next arcs for them. It’s a transitional episode, to be sure, both adding new elements to the story and picking up the threads where they left off. It is an enjoyable entry, and succeeds in getting viewers primed for another go-round with Showtime’s best half-hour series.