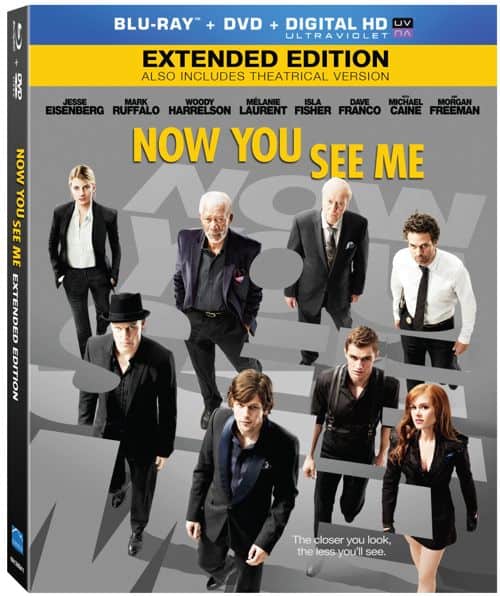 The lines between magic, illusion and crime blur in the “exceedingly clever” (Entertainment Weekly) Now You See Me arriving on Blu-ray Combo Pack (plus DVD, Digital Copy and Digital UltraViolet), DVD (plus Digital UltraViolet), Video on Demand and Pay-Per-View September 3 from Summit Entertainment, a LIONSGATE company. Now You See Me will also be available for Digital Download August 30th, four days prior to the Blu-ray and DVD release. The Blu-ray Combo Pack features an Extended Director’s Cut of the film featuring 16 minutes of never-before-seen footage. Prepare to be amazed as “The Four Horsemen,” a super-team of the world’s greatest illusionists, pull off a series of daring heists while evading a squad of FBI agents and an Interpol detective trying to stop them before their most daring final trick!  Directed by Louis Leterrier (Clash of the Titans), Now You See Me is a visually spectacular blend of astonishing illusions and exhilarating action starring Academy Award® nominees Jesse Eisenberg (Actor in a Leading Role, The Social Network, 2010) and Woody Harrelson (Actor in a Supporting Role, The Messenger, 2009) alongside Isla Fisher (The Great Gatsby) and Dave Franco (Warm Bodies) as the magicians known as “The Four Horsemen.” The film also stars Academy Award® winners Morgan Freeman (Actor in a Supporting Role, Million Dollar Baby, 2004) and Michael Caine (Actor in a Supporting Role, The Cider House Rules, 1999), plus Mark Ruffalo (The Avengers) and Mélanie Laurent (Beginners) as the law-enforcement team hot on their tails.  The screenplay is by Ed Solomon and Boaz Yakin & Edward Ricourt, with a story by Boaz Yakin & Edward Ricourt.

The Four Horsemen, a magic super-group led by the charismatic J. Daniel Atlas (Eisenberg), perform a pair of high-tech, high-profile magic shows. First amazing audiences by remotely robbing a Paris bank while in Las Vegas, and then exposing a white-collar criminal and funneling his millions into the audience members’ bank accounts, baffling the authorities. FBI Special Agent Dylan Rhodes (Ruffalo) is determined to make the magicians pay for their crimes—and to stop them before they pull off what promises to be an even more audacious heist. But he’s forced to partner with Alma (Laurent), an Interpol detective about whom he is instantly suspicious. Out of desperation, he turns to a famed magic debunker, who claims the Paris bank trick was actually a meticulously planned illusion. Dylan and Alma begin to wonder if the Horsemen have an outside point person. If so, finding him (or her) would be the key to ending the magicians’ crime spree. But who could it be? Or…could it really be…magic?

The Blu-ray Combo Pack, along with the extended director’s cut with sixteen minutes of never-before-seen footage, includes an audio commentary, two revealing featurettes and deleted scenes. The DVD bonus materials include an audio commentary and a “making of” featurette. The Now You See Me Blu-ray Combo Pack and DVD will be available for the suggested retail price of $39.99 and $29.95, respectively. 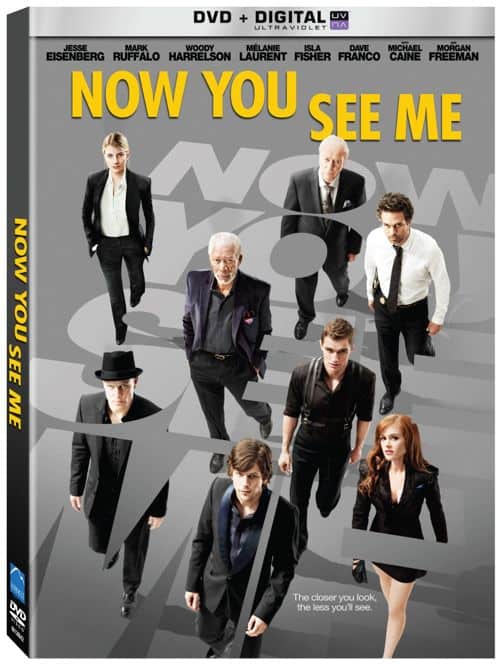