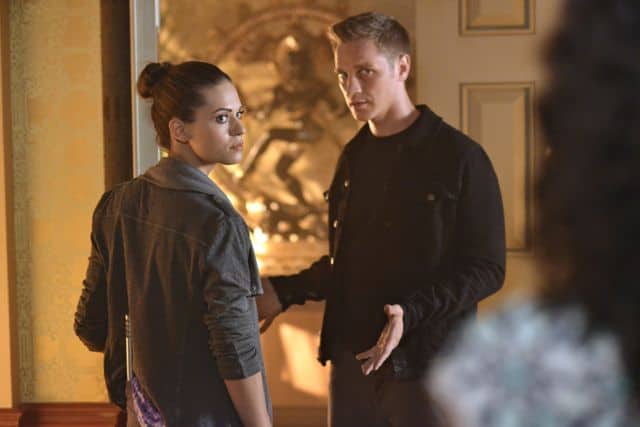 NIKITA Season 4 Episode 2 Dead Or Alive Photos : DOUBLE TROUBLE — Nikita (Maggie Q) reunites with Michael (Shane West), Birkhoff (Aaron Stanford) and Ryan (Noah Bean) aboard the team’s aircraft command center.  Michael refuses to discuss their relationship but tells Nikita she should stay with the group and let them help her clear her name.  Ryan realizes Amanda (Melinda Clarke) is making doubles of VIPs with The Shop’s help.  Nikita discovers that one of the doubles is the Director of the FBI (guest star Alex Carter), but doesn’t know how to kill him without exposing herself.  Meanwhile, Alex (Lyndsy Fonseca) holds Sam (Devon Sawa) at gunpoint and demands he return what he stole from her, but when a gang of thugs attacks them they are forced to work together to escape.  John Badham directed the episode written by Albert Kim (#402).