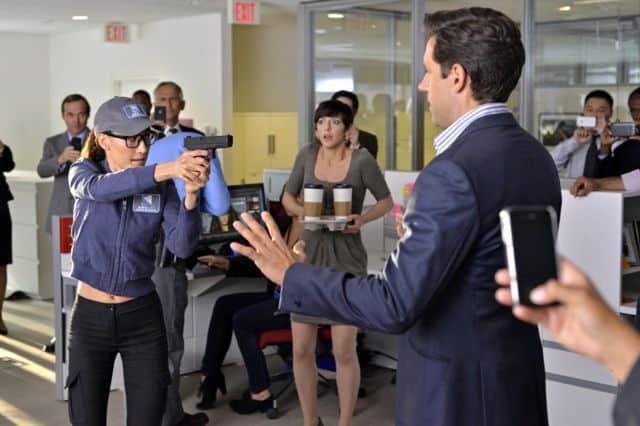 NIKITA Season 4 Episode 1 Wanted Photos : THE FINAL FIGHT BEGINS — Nikita (Maggie Q) is still on the run after she was framed for the assassination of the President of the United States.  Dale, a reporter (guest star Todd Grinnell) from the news channel ENN, starts questioning what really happened that night.  Nikita sees this as an opportunity to clear her name so she re-enters the country to talk to Dale but walks right into a trap set by Amanda (Melinda Clarke).  The team is alerted and Michael (Shane West) sets out to find Nikita before Amanda does.  While Birkoff (Aaron Stanford) and Ryan (Noah Bean) help Michael from their new mobile office, a high-tech aircraft, Alex (Lyndsy Fonseca) stakes out a human-trafficking ring and learns The Shop is involved.  Things go south and Alex is surprised when Owen/Sam (Devon Sawa) shows up at the scene.  Eagle Egilsson directed the episode written by Kristen Reidel (#401).