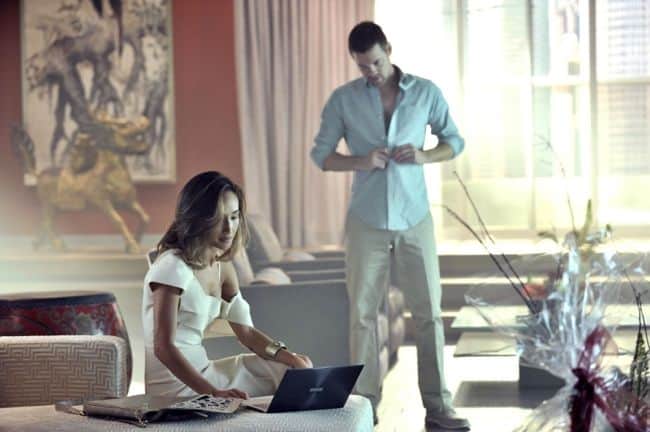 The CW’s NIKITA returns tonight with “3.0.” It’s been a few months. Ryan (Noah Bean, newly promoted to series regular) now leads Division, with Nikita (Maggie Q) and her friends serving as his senior staff. Sanctioned by the President of the United States herself (Michelle Nolden), they must stay under the radar while they round up the “Dirty Thirty,” agents who have gone rogue since Percy was taken down.

Hopefully, “3.0” won’t be the new format of the series. It feels very much like a case of the week, with a stand-alone mission. Yes, there are thirty of these agents out there that must be caught, but watching thirty separate weeks of this will grow boring. NIKITA works because it’s a serial, not a procedural, and the sooner they return to that format, the better.

Of course, perhaps it’s necessary to take a little break and reintroduce the characters, revealing what their relationships are like now. Ryan and Nikita clash because she still wants to control her own destiny and make her own decisions, as she did for so long on the run, while Ryan needs to establish firm authority in front of the rest of the staff. Birkhoff (Aaron Stanford) isn’t sure what to do with his new promotion, abandoning his desk to take over his inferiors’ and personally run ops. Alex (Lyndsy Fonseca) can’t go undercover, but using her reputation as Alexandra can open other doors for them.

Other than that, they’re pretty much the same people. They have to fit into a new box, and that’s difficult, but because they still get to use many of their talents, namely, spy work, they will figure it out.

As long as Ryan doesn’t crave too much power, that is. After all, it doesn’t seem like, based on his back story, that Percy began evil. Ryan is throwing himself into Division obsessively, dealing with the president, sleeping in his office. Might the temptation to hang onto what he’s building end up being too much for him when the job is done and it’s time to take apart the group? And by keeping Division covert during his tenure, will he have the means to use it to his own will? Or will the staff, whom now have their eyes open to what is really going on, and more importantly, Nikita, the show’s moral compass, be able to keep him on the straight and narrow?

Not appearing in “3.0,” we are still reminded that Amanda (Melinda Clarke) is out there somewhere, trying to recruit others to her cause, and with a decrypted black box. With Percy gone and Gogol crippled, Amanda is the last great villain for Nikita and company. NIKITA needs a bad guy, and I would not be surprised if this “Dirty Thirty” is just filler until Amanda gets some power back under her. Unfortunately, Amanda has never posed quite the threat that Percy did. Is that going to change?

NIKITA remains a highly exciting, action-packed series. The events of “3.0” are as much of an adrenaline rush as ever, even if the stakes seem a little lower. For this reason, it is still definitely worth tuning it. It will find its long-arc legs again soon enough, hopefully.

The series also takes time this week for a little romance. I won’t go into details, so as not to spoil the hour for anyone, but Michael (Shane West) has a plan that has nothing to do with guns and Division. What his plan entails, or the result of it is, well, you’ll see. The shippers should definitely tune in to this one.

I like NIKITA because it reminds me of ALIAS, a superior spy show that I miss. ALIAS’ fault, if there was one, that it was too bogged down in the Rambaldi mythology, or so some (not me) accused, rather than just being a spy thriller. NIKITA doesn’t have that trouble, always skating around going too deep. But other than that, it has taken the best parts of ALIAS and built them in their own way. ALIAS took down their secret-government-operation-that-unbeknownest-to-the-employees-wasn’t-actually-working-for-the-government in mid-season two. NIKITA went the more traditional route and waited ‘til the season finale. Still the same great idea, though NIKITA went with the route that saved them on budget, keeping the same sets.

Will NIKITA learn the lessons of its predecessor and keep re-writing the formula every couple of years? Will they manage to build another villain who matters as much or is as dangerous as Percy was? These are the questions facing the writers that must be figured out during the course of season three. “3.0” does not hold those answers. If NIKITA is going to rise, now is the time to show us. Otherwise, it could turn into a shell of its former self, and quickly become not worth watching. From the season premiere, it’s hard to tell which way it might go. But the characters are well developed enough, I’ll learn towards optimism.