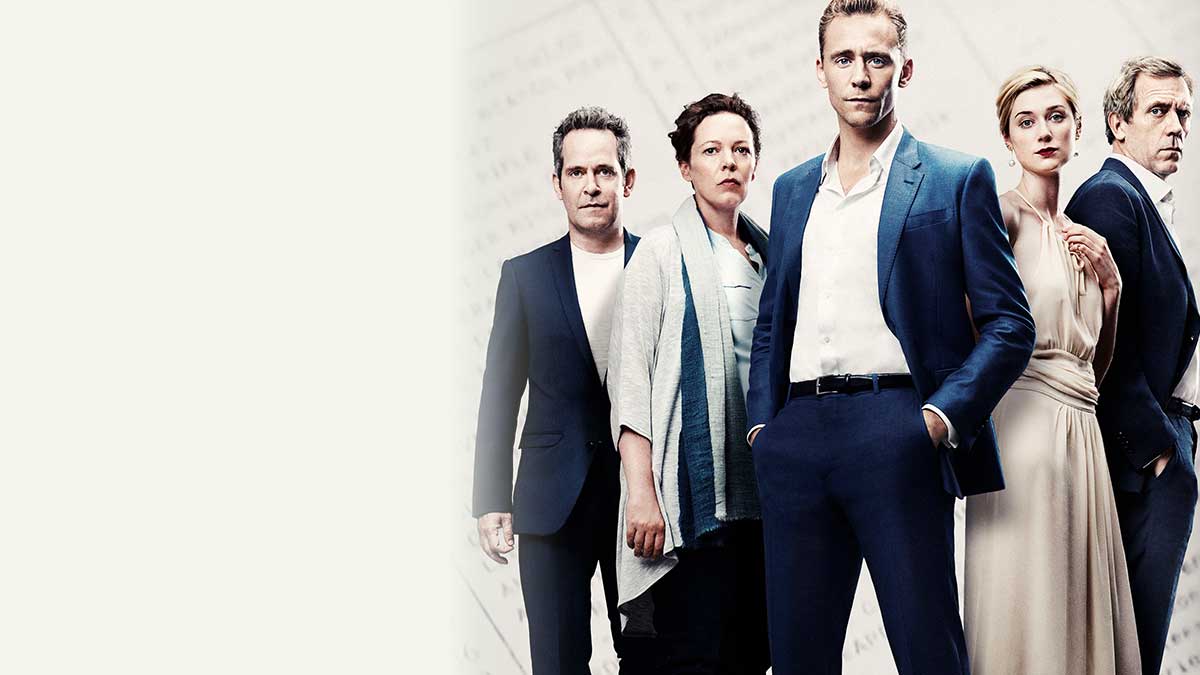 AMC recently co-produced a six-episode miniseries with the BBC, and beginning this week, less than a month after it completed its run in England, Americans will get their first look at the tale. Titled THE NIGHT MANAGER, it is based on the novel of the same name by John le Carre (Tinker Tailor Soldier Spy), first published in 1993, and updated to seem more timely. Essentially, it presents a cat-and-mouse game of two vastly mismatched partners who just might somehow be a perfect pairing.

The hero of the piece is Jonathan Pine (Tom Hiddleston, The Avengers), a former British soldier who now handles things after dark at a very upscale hotel in Cairo, Egypt. An accidental run-in with a woman who is connected to the seedy underworld sparks feelings of protectiveness in Jonathan, and it isn’t long before he becomes involved in international espionage, given face by MI6 agent Angela Burr (Olivia Colman, Broadchurch).

Cue the villain, Richard Roper (Hugh Laurie, House), who values money above people. Traveling with an entourage, which includes girlfriend Jed Marshall (Elizabeth Debicki, The Great Gatsby) and protector Corky (Tom Hollander, Rev.), Roper comes in contact with Pine, who knows Roper is responsible for some unfortunate things Pine cannot get over. Thus begins their competition.

Hiddleston and Laurie are absolutely phenomenal in the leading roles, as one would expect. Hiddleston is the star, with his Pine as every bit as sympathetic and heroic as Loki, the character he is best known for playing, is scheming and twisted. Laurie has the smaller role, especially in the first hour, but that makes his screen time even more powerful, grabbing attention the moment he shows up.

With two such talented performers leading the story, it’s little wonder that the series is incredibly captivating. They’re the type of men who could carry a single-set, small drama, and given the larger world stage (THE NIGHT MANAGER hops countries a few times), they still steal focus from the impressive scenery.

I mentioned in the opening that the story has been updated, but not to worry, the changes are not startling nor distracting. The televised version of THE NIGHT MANAGER plays upon Egypt’s Arab Spring and the Syrian crisis. Since the novel came out more than two decades ago, those weren’t elements in the original work. But while I have not read the book, I think it’s smart to make the surrounding details more relevant to the moment, giving easily understood context to the larger picture, even though the main points are the characters, whom could exist the same in any number of settings.

Besides our leads, the three other main players are amazing as well, and the supporting cast includes the likes of Tobias Menzies (Outlander), David Harewood (Homeland), Alistair Petrie (Rush), and Russell Tovey (Being Human). If these are the kind of people coming in to play the smaller roles, I think that’s a sure sign the program is heading in the right direction.

Pretty much every direction THE NIGHT MANAGER takes is correct. The pacing is slow enough to dwell in the appropriate moments, but stays far ahead of boring. The locales are sweeping and beautiful. The hotels that Pine works at are extravagant masterpieces. The score accentuates without distracting. Honestly, other than the fact that the story being told is longer than would fit, THE NIGHT MANAGER could make a very well-regarded motion picture. After only viewing a single hour, I am totally hooked and convinced the entire half dozen installments will be well worth your time. I’m putting them on my schedule.

THE NIGHT MANAGER premieres Tuesday at 10/9c on AMC.