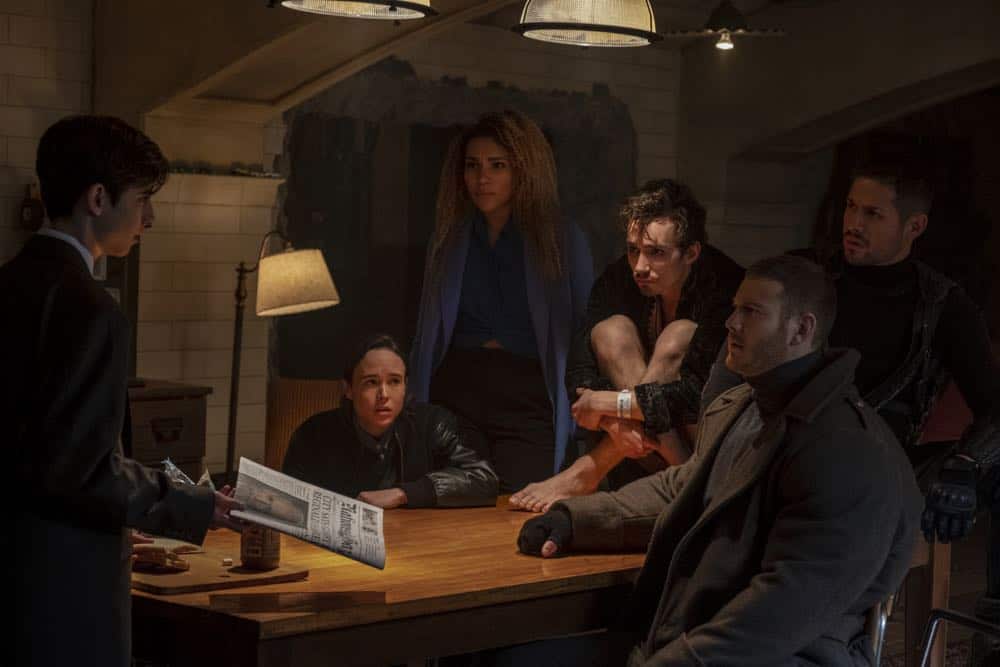 See below for a list of titles that will be added to Netflix in February 2019.
All titles and dates are subject to change

As Good as It Gets

Dear Ex– NETFLIX FILM
When Sanlian’s ex-husband passes away, she discovers he has altered his insurance policy, cutting out their son in favor of a stranger named Jay. Outraged, Sanlian decides that she and her son will confront Jay, but Jay proves equal to her scheme. However, when her son unexpectedly moves in with Jay, she is forced to reassess her relationship with them both.

Free Rein: Valentine’s Day– NETFLIX ORIGINAL
Zoe and the gang plan a girls only Galantine’s adventure. But when they set out to find the mysterious Maid’s Stone it soon becomes clear they’re not the only ones on the trail. As they race against Pin and Marcus, Holloway, and a not-to-be-trusted Mia, the girls’ friendships are tested to the limits. And, with the end of the quest in sight, Zoe wonders if some things might be better left buried…

Russian Doll– NETFLIX ORIGINAL
Russian Doll follows a young woman named Nadia (Natasha Lyonne) on her journey as the guest of honor at a seemingly inescapable party one night in New York City.

Siempre bruja– NETFLIX ORIGINAL
Siempre bruja follows 18 year old Carmen, a Colombian slave and witch from the 17th century who, in a desperate attempt to save her loved one, travels in time to present day Cartagena. Navigating the waters of this exciting new world, Carmen will soon discover that once a witch, always a witch.

The Edge of Seventeen

Bordertown: Season 2– NETFLIX ORIGINAL
Past and present collide in dizzying ways for Kari Sorjonen and his colleague Lena as they investigate murders and other crimes with links to Russia.

Romance is a Bonus Book (Streaming Every Saturday)– NETFLIX ORIGINAL
A gifted writer who’s the youngest editor-in-chief ever at his publishing company gets enmeshed in the life of a former copywriter desperate for a job.

Ray Romano: Right Here, Around the Corner– NETFLIX ORIGINAL
23 years after his last stand-up special, comedian, screenwriter, and Emmy Award-winning actor Ray Romano debuts his first Netflix comedy special, Ray Romano: Right Here, Around the Corner. Performing two sets on the same night – one at Manhattan’s Comedy Cellar and the second at the Village Underground, literally around the corner – Romano advises on choosing friends, surviving marriage, and knowing the difference between being old and not being young. The comedy special will launch globally on Netflix February 5th.

El árbol de la sangre– NETFLIX FILM
Marc (Álvaro Cervantes) and Rebeca (Úrsula Corberó) are a young couple who goes to an old farmhouse belonging to Marc’s family. There, they write the shared story of their roots, creating a large family tree that harbors 25 years of love, heartbreak, sex, madness, jealousy and infidelity… and under which lies a deep mystery that marked their lives. Over their days at the farmhouse, each one will reveal secrets from their past to the other, putting their own love story in danger.

High Flying Bird– NETFLIX FILM
In the midst of a pro basketball lockout, sports agent Ray Burke (André Holland) finds himself caught in the face-off between the league and the players. His career is on the line, but Ray is playing for higher stakes. With only 72 hours to pull off a daring plan, he outmaneuvers all the power-players as he uncovers a loophole that could change the game forever. The outcome raises questions of who owns the game – and who ought to. Directed by Academy Award winner Steven Soderbergh (Traffic) from a script by Academy Award winner Tarell Alvin McCraney (Moonlight), HIGH FLYING BIRD features an acclaimed ensemble cast that includes Zazie Beetz, Melvin Gregg, Sonja Sohn, Zachary Quinto, Kyle MacLachlan and Bill Duke, plus appearances from NBA athletes Reggie Jackson, Karl-Anthony Towns and Donovan Mitchell.

Kevin Hart’s Guide to Black History– NETFLIX ORIGINAL
In this 1+ hour comedic special, Kevin Hart plays himself while discussing the fascinating contributions of lesser known individuals from Black history through the lens of various educational reenactments.

One Day at a Time: Season 3– NETFLIX ORIGINAL
Penelope studies to become a nurse practitioner, Elena and Syd grow closer, Alex gets punished, Lydia tackles a bucket list, and Schneider falls in love.

ReMastered: The Two Killings of Sam Cooke– NETFLIX ORIGINAL
REMASTERED: A long form documentary series of high profile, in-depth stories about music’s impact on society, as told by critically acclaimed directors, with each episode revealing surprising insight beyond the expected or commonly known. SAM COOKE: Sam Cooke was the most influential black musician of the Civil Rights Movement and advocated for the rights of black musicians, frustrating the white establishment. An investigation into the circumstances and controversy surrounding his shooting death include theories that he had been robbed and “trick-rolled’ by a woman, later revealed to be a prostitute. But many believe in a larger societal set up; namely that he was targeted by music industry moguls with links to the mob who all wanted him dead for emerging as a totem for black musicians’ rights.

The Epic Tales of Captain Underpants: Season 2– NETFLIX ORIGINAL
George and Harold have to keep their grades up to go to summer camp. But it’s a tall order with Melvin — and a cyborg Melvin — running the school!

Unauthorized Living– NETFLIX ORIGINAL
An influential Galician drug cartel leader must seek out his successor while keeping his degenerative disease a secret.

The Break: Season 2– NETFLIX ORIGINAL
Yoann Peeters finds himself tangled in another disturbing murder case when his former psychiatrist asks for help proving a patient’s innocence.

Dating Around– NETFLIX ORIGINAL
Every episode, one single goes on five first dates filled with flirty banter, awkward exchanges and moments of true connection. Who will get a second date? Netflix’s first original dating show takes an honest and compelling look at the real world of dating.

Ken Jeong: You Complete Me, Ho– NETFLIX ORIGINAL
Comedian, actor and former physician Ken Jeong returns to his stand-up roots for his first-ever Netflix comedy special, Ken Jeong: You Complete Me, Ho. Filmed at the Ice House Comedy Club in Pasadena, California, where Jeong first got his start in comedy, You Complete Me, Ho reflects on how Jeong went from being a doctor to a comedy superstar and opens up about how his wife’s courageous battle with breast cancer led to him starring in one of the biggest comedy franchises of all time, The Hangover. The special is directed and executive produced by Jon M. Chu, who also directed Jeong in the groundbreaking box office phenomenon Crazy Rich Asians. Den of Thieves produced the special with Executive Producers Jesse Ignjatovic, Evan Prager, Jared Morell, Jordan Barrow, and Brett Carducci.

Larry Charles’ Dangerous World of Comedy– NETFLIX ORIGINAL
Legendary comedy writer and director Larry Charles travels the world in search of humor in the most unusual, unexpected and dangerous places.

The Breaker Upperers– NETFLIX FILM
Two women run a business breaking up couples for cash but when one develops a conscience their friendship unravels.

The Dragon Prince: Season 2– NETFLIX ORIGINAL
Rayla and the princes hurry toward Xadia with their precious cargo. But Claudia and Soren are close behind — and determined to stop them.

Yucatan– NETFLIX FILM
Competing con artists attempt to creatively and ruthlessly swindle a fatherly lottery winner while on a lively cruise from Spain to Mexico.

Firebrand– NETFLIX FILM
A contemporary story about relationships and the highs and lows people deal with in their lives.

GO! Vive a tu manera– NETFLIX ORIGINAL
Fiercely talented Mia receives a scholarship to a prestigious dance academy, where she soon clashes with the owner’s fashionable and popular daughter.

Paris Is Us (Paris est à nous)– NETFLIX FILM
Dreams and reality collide as a young woman navigates a tumultuous relationship amid rising social tensions, protests and tragedies in Paris.

Rebellion: Season 2– NETFLIX ORIGINAL
As the conflict between the British government and the revolutionary Dáil rages, personal connections cloud allegiances for participants on both sides.

The Photographer of Mauthausen– NETFLIX FILM
Imprisoned at the concentration camp of Mauthausen during WWII, Catalan photographer Francesc Boix struggles to survive while saving other people and hiding film negatives that will later help incriminate Nazis.

Workin’ Moms– NETFLIX ORIGINAL
WORKIN’ MOMS is an original comedy series created by and starring Catherine Reitman that tests the modern ideal that women really can have it all.

Queer as Folk: The Final Season