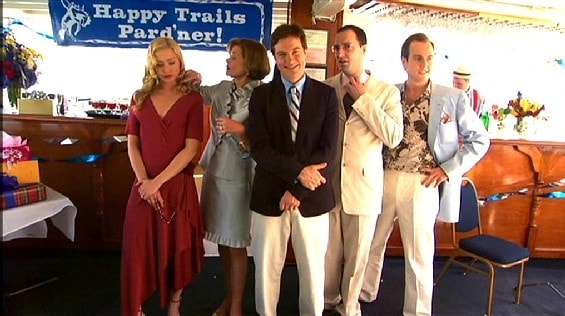 Netflix and the producers of Arrested Development are awarding six walk-on roles for super fans to appear in the upcoming fourth season of the critically-acclaimed series, available exclusively on Netflix in spring 2013.

“The Bluths have walked on so many people we thought it was only fair to let a few fans walk on them. Come see behind-the-scenes and for God’s sake, please don’t touch anything!” said series creator and executive producer Mitch Hurwitz.

Starting today, fans in the U.S. can enter to win one of the six walk-on opportunities by creating an original piece of Arrested Development content. Entries could include video (less than 2 minutes long), a photo, original artwork, or anything else fans can dream up. Winning entries will be chosen by the cast and producers of the show on the basis of creativity, distinctiveness and relevance to the show. Fans can post their submissions directly to Twitter, Instagram or Tumblr, with the hashtag #BluthWalkOn, or enter online at www.youregonnagetsomewalkons.com.

Six lucky winners will get an expense-paid trip to Los Angeles to visit the set of Arrested Development and participate in a walk-on role during an upcoming episode of the highly anticipated fourth season. Contest ends Tuesday, October 16, 2012. View the full contest rules and see all the current entries at www.youregonnagetsomewalkons.com.