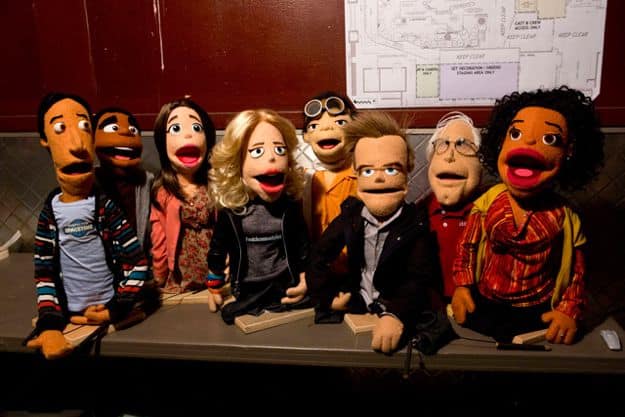 NBC announced today that the characters of its acclaimed comedy “Community” will be immortalized as puppets in an upcoming episode airing later this spring. In the episode, the study group takes a wild balloon ride that crash lands in the woods and they end up spending a little time with a friendly mountain man, played by Jason Alexander (“Seinfeld”). The announcement was made tonight at the annual PaleyFest panel presentation for “Community” in Beverly Hills, sponsored by the Paley Center for Media.

As the study group recounts their adventures in the woods, which has left them all feeling a little awkward with one another, Dean Pelton (Jim Rash) encourages them to speak about their experience with the use of puppets.  The puppets include characters Jeff (Joel McHale), Pierce (Chevy Chase), Britta (Gillian Jacobs), Shirley (Yvette Nicole Brown), Abed (Danny Pudi), Annie (Alison Brie), Troy (Donald Glover) and Chang (Ken Jeong).

Guest star Alexander is well known to audiences for his portrayal of George Costanza on NBC’s hit comedy series “Seinfeld,” a role that earned him six Emmy Award nominations and four Golden Globe Award nominations, along with an American Television award and two American Comedy Awards. In addition, the Screen Actors Guild knighted him “Best Actor in a Comedy Series” and TV Guide readers voted him among the10 greatest television characters of all time.  Beyond “Seinfeld,” Alexander’s career has included memorable Broadway shows including Stephen Sondheim’s “Merrily We Roll Along” and Jerome Robbins’ “Broadway,” which won him the Drama Desk, Outer Critics Circle and Tony Award.

The felt and foam puppets are designed and built and operated by Scott Johnson, Drew Massey, and their teams of talented builders and puppeteers.  They were also responsible for turning David Boreanaz into a puppet for an episode of “Angel.”