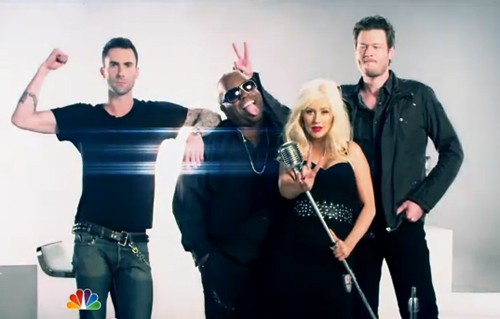 NBC has picked up the fourth and fifth cycles of the hit music competition series “The Voice” for Spring and Fall 2013, it was announced today by Robert Greenblatt, Chairman, NBC Entertainment.

“This pickup will assure the many dedicated ‘Voice’ fans that this innovative show will continue to bring some of the most talented new voices to the world’s attention through all of next year,” said Greenblatt. “With the addition of Usher and Shakira as rotating coaches to join Christina, CeeLo, Adam and Blake in the next cycle, we know that this incredibly addictive program will remain even more relevant as we move forward through this exciting season. My hat is off to John de Mol, Mark Burnett, and everyone who produces this classy and highly entertaining show for us.”

“The Voice” is generating strong ratings at the start of its third season, averaging a 4.5 rating through its first two Mondays in adults 18-49 and a 4.3 on its opening two Tuesdays, while in total viewers, the show has averaged 12.9 million persons on Monday and 12.5 million on Tuesday, according to Nielsen Media Research. Those two editions scored as the #1 and #2 non-sports telecasts on ABC, CBS, NBC and Fox for both weeks in 18-49. In preliminary “fast affiliate” results for Monday of this week, “The Voice” delivered a 4.2 rating, 11 share in adults 18-49 and 11.9 million viewers to rank a decisive #1for the night in 18-49 versus the premieres of ABC’s and CBS’s fall schedules and week two of the Fox lineup.

Last week – one week after its new fall season premiere — “The Voice” introduced music superstars Usher and Shakira as two new celebrity musician coaches when it returns next spring for its fourth cycle. Christina Aguilera, who is releasing a new album and going on tour, and CeeLo Green, who is developing new music plus a scripted comedy series for NBC based on his life, will take the Spring 2013 cycle off.

Current celebrity musician coaches Adam Levine and Blake Shelton will remain with the series through the fourth cycle.

“The Voice” returned with the strongest vocalists from across the country invited to compete in the blockbuster vocal competition show’s third season. Celebrity musician coaches Christina Aguilera, CeeLo Green, Adam Levine and Blake Shelton return along with Carson Daly as host and Christina Milian as Social Media Correspondent.