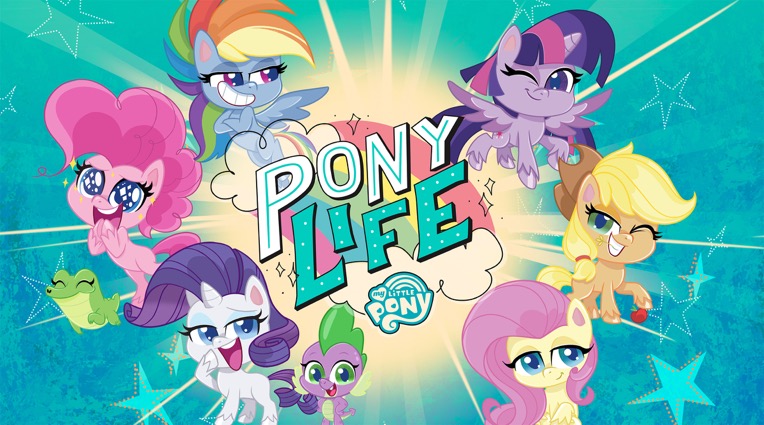 Featuring the same iconic voice actors who made the Mane 6 famous in the mega-hit MY LITTLE PONY: FRIENDSHIP IS MAGIC, the new MY LITTLE PONY: PONY LIFE series is a departure from the Equestria that viewers were introduced to in 2010. Featuring a more playful tone combined with completely reimagined characters, MY LITTLE PONY: PONY LIFE explores the funny side of friendship set in Sugarcube Corner – the center of the world and home away from home for the ponies. Here, Pinkie Pie serves up frosted cupcakes to the best customers in the world – her friends! Together, the Mane 6 run into all sorts of cupcake conundrums, delicious disasters, and magical mishaps. And thanks to a mysterious source of magical potions, everyday adventures are about to get really ridiculous!

Each 11-minute bite-sized episode of MY LITTLE PONY: PONY LIFE features playful stories grounded in modern-kid dilemmas with over-the-top humor and tons of magic. Viewers should expect the unexpected with dialed-up personalities, energy and tone. Plus, each pony now has a signature “adorability” power that boosts their personality in an outrageously wacky way! In the series premiere episodes titled “Princess Probz & The Best of the Worst,” the ponies help Pinkie Pie audition for a televised cooking competition called the Royal Jelly Juggernaut. But when the rest of the Mane 6 are caught in a sticky situation, Pinkie Pie has to audition all on her own. Later, Rainbow Dash’s competitive spirit is put to the test when a new pony challenges her to a contest unlike any other: being the best of the worst!

MY LITTLE PONY: PONY LIFE is produced by eOne for Discovery Family. Stephen Davis is the Executive Producer. To learn more, go to www.discoveryfamilychannel.com, on Facebook at www.facebook.com/DiscFamily and on Twitter @DiscoveryFamily. For My Little Pony and Pony Life, visit www.mylittlepony.com or find out more on Facebook and Instagram.

The leading television destination for families in the United States, Discovery Family is available in more than 47 million U.S. homes and is a joint venture of Discovery Communications and Hasbro. Discovery Family is programmed with an inspirational mix of family-friendly series and popular animation franchises, including MY LITTLE PONY: FRIENDSHIP IS MAGIC, LITTLEST PET SHOP and the Emmy-winning TRANSFORMERS RESCUE BOTS. Families can enjoy their favorite shows anytime, anywhere through Discovery Family GO – the network’s TV Everywhere app offering live and on demand access to your favorite Discovery Family series and specials. For 2020-to-date, Discovery Family ranks as the #1 most co-viewed kid’s network among Kids 2-11 watching with an Adult 18-49 in Total Day and Prime.