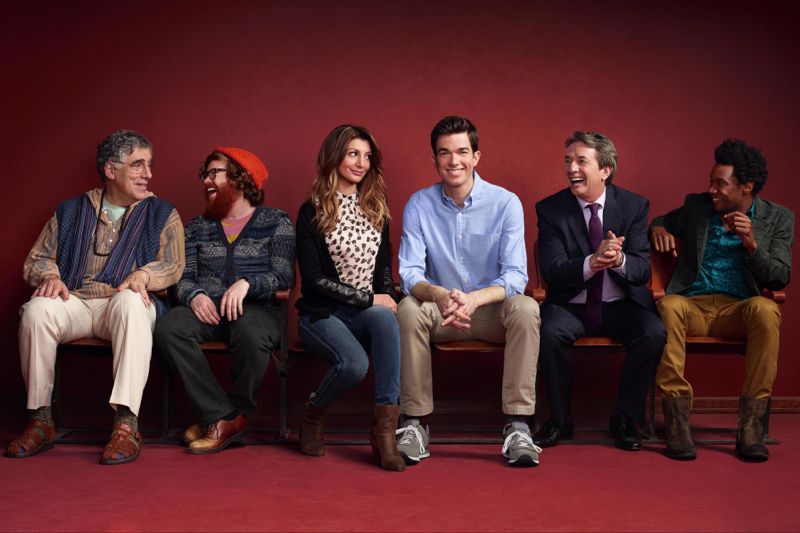 Perhaps the most anticipated new comedy this fall is FOX’s MULANEY. Don’t know who Emmy Award-winning comedian and Saturday Night Live scribe John Mulaney is? That’s OK. You’ll figure it out pretty quickly in the first half hour.

The parallels between MULANEY and classic favorite Seinfeld are immediate and numerous. Mulaney, like Seinfeld, stars in a show titled after his surname. He plays a version of himself, a standup comedian who hasn’t quite made it. The episode is interspersed with Mulaney doing standup. Mulaney lives in a small apartment in the Big Apple. And in his off time, Mulaney hangs out with two guys and girl who are equally self-obsessed and slightly odd, in an average New Yorker sort of way.

These three are: Andrew (Zack Pearlman, The Inbetweeners), the wacky neighbor who subsists without an obvious job; Jane (Nasim Pedrad, Saturday Night Live), the stalker ex-girlfriend (not John’s ex) who knows her flaws but not how to overcome them, as well as lacking much desire to do so; and Motif (Seaton Smith, Pancake Mountain), a fellow standup that concentrates more on marketing himself than writing jokes.

But it’s not a straight Seinfeld copy. Besides the four main cast members listed above, two more players give the series some different elements. Mulaney gets a job working for TV star Lou Cannon (Martin Short, Damages, ¡Three Amigos!), a narcissist who likes to hear himself talk a lot. Given how little he seems to let Mulaney actually contribute to his game show, it’s not clear if the position will be beneficial for our protagonist. Luckily, Mulaney has wise neighbor Oscar (Elliott Gould, Ray Donovan, M*A*S*H), an elderly gay man who has seen it all, to dispense advice.

Truthfully, this premise and cast are a great mix. Short and Gould are veterans who are already well known for their considerable talent, having played a number of memorable roles in their careers, and these parts are well-suited to them. Pedrad is fantastic, and the role feels like an apt next step after doing a sketch show for awhile.

In the pilot, there are a few laugh-out-loud moments, even if every scene doesn’t qualify. MULANEY does have a 1990s feel quite often, but hopefully it’s just different enough to still be appealing. It isn’t the most fresh or unique program out, but the quality is pretty strong overall, and that may be enough.

The main problem with MULANEY is Mulaney himself, though. He’s very wooden, with little to allow the audience to relate to. He has the wholesome normal guy quality, but without any way to really sell it to the camera. Instead, he’s almost delivering his standup act in every line, even those not set on a dark stage. He is clearly a very good writer and has surrounded himself with capable people, but hasn’t learned how to exist in this world himself.

Yet, that may change over time. There are plenty of performers that grow into their roles. As long as the premise itself is stable and the rest of the actors are good, Mulaney may have time to figure out how to emote a little better or sell an emotion other than satisfied and bemused. I do think Mulaney may just get enough of a run to allow for this to happen, since just about every other element of his show works.

I like MULANEY. As I’ve outlined, it’s far from perfect. But it’s probably good enough for now, and how it grows or changes over the season will determine its fate. Staying the same is also an option for it, though it has to be extremely consistent for that to work, so allowing for character development may be a better way to do, even if it’s a little harder to get the laughs in that route.

MULANEY premieres Sunday, October 5th, breaking up the animation block along with Brooklyn Nine-Nine, on FOX.