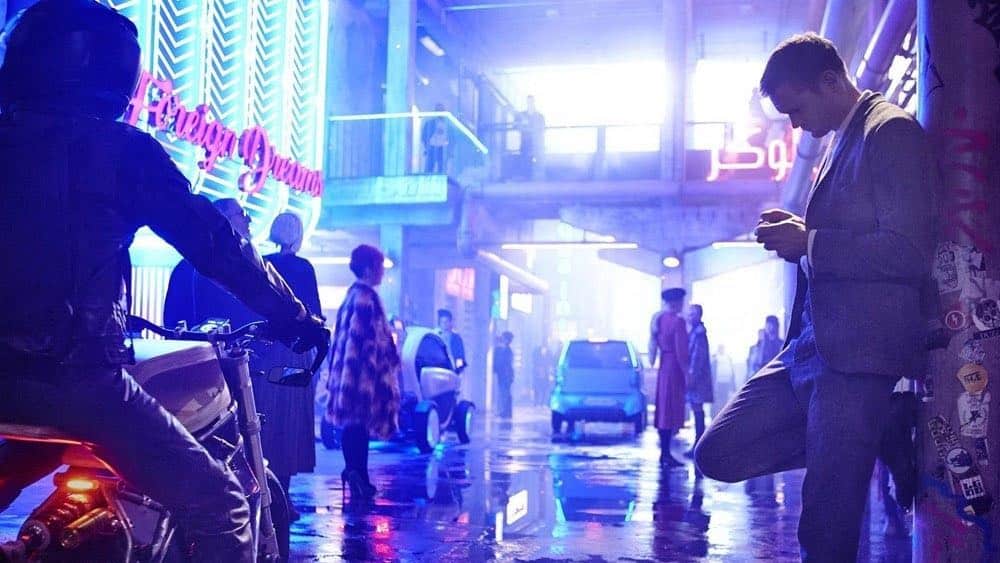 Netflix, besides making a ton of television series, has recently started putting out lots of original films, too. One of the newest is MUTE, which is written and directed by Moon’s Duncan Jones, also written by Michael Robert Johnson (2009’s Sherlock Holmes). It follows a mute man named Leo who runs afoul of mobsters as he searches for the woman he loves, who has gone missing. And, just to add some flavor, it is set in Berlin, Germany in the future, although the characters do speak English.

The setting is interesting, though not all that relevant to the story. Sure, the reason Cactus Bill (Paul Rudd, Ant-Man) is in the country is because of a war that hasn’t happened yet, so in that way it ties into the futuristic framework. Yet, there could be another reason for Bill’s presence without jumping forward, so I’m not quite sure why this film doesn’t take place today other than that the choice makes for some very cool visuals.

The story itself is a basic one at its heart, with some complexity thrown in to keep it interesting. Leo (Alexander Skarsgard, True Blood) deeply loves Naadirah (Seyneb Saleh, Dogs of Berlin). Leo is a lonely man, so it makes sense that he’d be even more invested in the relationship than most people in his situation might be. Thus, of course he’s willing to give up everything, his job, his personal safety, unconcerned of what anyone else might think of him to find her, his sole purpose. It’s a sweet, if familiar, tale.

What does make the film a bit unique is that Leo is mute. The explanation involves a childhood accident and a deeply religious family that espouses surgery that could correct it. But the point is, Leo doesn’t talk to anyone in the movie. He occasionally signs, sometimes writes things down, but the majority of his communication is through body language and facial expressions. It’s a great role for Skarsgard, who performs it wonderfully. Though, of course, it’s a shame the production didn’t use an actual mute actor. But if they were going to choose a non-mute performer, Skarsgard is the right choice.

Where the story veers into weird territory is when it focuses on Bill, a layered character. He deeply loves his daughter and is devoted to getting her back to North America. To do so, he has to work for some bad dudes until they are willing to provide him a passport. (He’s a military deserter, so can’t go through normal legal channels.) Bill has an unexpected connection to Naadirah, which is interesting. He also has his own moral code which allows him to operate outside the law, and yet have some mixed values. For instance, he can remain friends with someone who’s behavior deeply offends him.

MUTE has been getting mixed reviews, some saying it’s a slog, gimmicky, or a mess. Honestly, I didn’t see those things when I watched. I found it compelling, visually stunning, unexpectedly creepy, and tantalizingly sexy all at the same time. My positive bias towards futuristic things could be at play here, but I’ve given other sci-fi less than stellar reviews lately, and I feel like MUTE doesn’t deserve that. It’s not a perfect film, nor will it make my must-rewatch-soon list. But I really enjoyed it for all the reasons above, a short story’s worth of material brought satisfyingly to life.