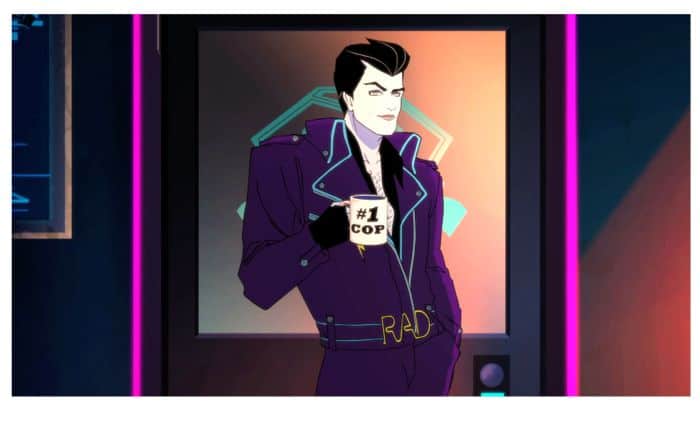 Comedy Central’s newest cartoon comedy is MOONBEAM CITY. Set in the metropolis named in the title, which has heavy Miami overtones to it, the show follows local cops as they struggle with the criminals who are ruining their beloved town. But the cops aren’t the slightest bit competent, nor are the criminals, really, and the results are humorous.

MOONBEAM CITY boasts a very impressive cast. The lead is Dazzle Novak (Rob Lowe, Parks and Recreation), who is very reminiscent of FX’s Archer, inept and over-sexed, but the star of the police force because of blind luck and charm. Dazzle is assisted by Chrysalis Tate (Kate Mara, House of Cards), who wants to stop getting coffee and start firing guns, which she already is much more skilled at than Dazzle. Dazzle’s rival on the force is Red Cunningham (Will Forte, Last Man on Earth), who is jealous of the hero, but slightly less effective. This motley crew is overseen by the put-upon Captain Pizzaz Miller (Elizabeth Banks, The Hunger Games), who has little patience for their antics, but seems hesitant to actually fire them.

Now if those names sound like something out of the 1980s, they are far from the only thing ripped from the era in this show. MOONBEAM CITY seems to be set in that decade, and the colors (neon), lighting (blinds), and music (synthetic) all reinforce the style, as does the clothing and overall design. The faces are super white, and only a portion of the spectrum is used, but it’s all very consistent with the overall tone of the piece.

To give you an idea of the type of bizarre, twisted stories the show seeks to tell, the pilot finds Dazzle hunting a kingpin he accidentally allows to ascend to that stature. But Dazzle gets distracted by a pretty girl playing chimes in a mall. (Yes, in keeping with the 80s trend, malls are very popular.) Dazzle commits himself to being her manager, which he does out of police headquarters, and only because of the kingpin’s ridiculous hobby does Dazzle even cross paths with his query. Could the whole thing be an elaborate scheme by Dazzle to catch his query? Nah; he’s just not that smart.

I’m sure MOONBEAM CITY will be a case-of-the-week procedural. It has already established the world and the format that it will likely be repeated in installment after installment as Dazzle tangles with many different villains.

This is where MOONBEAM CITY is sure to fall short of its closest rival, Archer. Archer thrives because it makes the viewer care about the characters, building a funny ensemble that make the show as much a workplace comedy as it is about spying. Over time, the players because far more important than the situations. MOONBEAM CITY has the potential to do this, with the criminal sort of ignored in the pilot, and the four leads being fantastic in their own right, but shows no signs of committing to putting character above story, at least not yet.

That being said, it’s still a humorous romp. There aren’t really any laugh-out-loud moments or quotable lines, but I enjoyed watching the half hour, and will probably tune in again. I’m impressed by the overall production, if not many of the specifics, and it deserves a chance to find itself and grow into whatever it’s going to be. It’s clear it doesn’t know what that is from the get go, but it has the right ingredients to get there without having to add new elements, so that’s a good start.