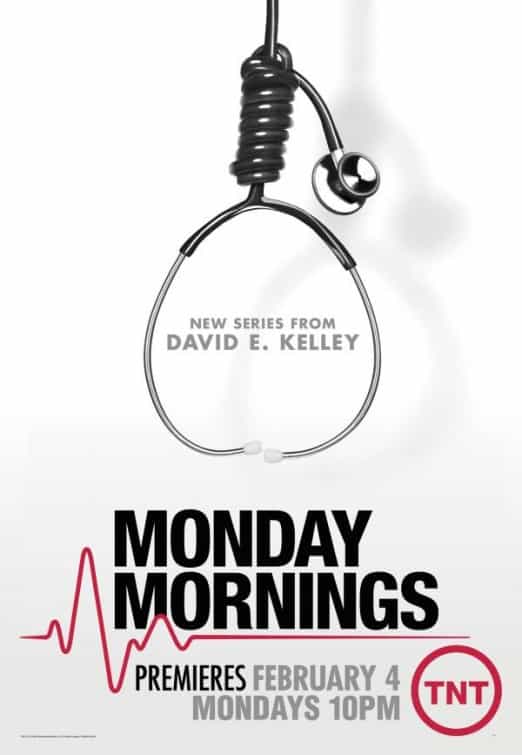 TNT will soon being airing the new drama MONDAY MORNINGS. It’s another doctor series, yes, but before you let that scare you away, as there are already so many medical shows on television, consider this: it’s from David E. Kelley and Bill D’Elia, who have excellent credits like The Practice, Boston Legal, and Harry’s Law on their resumes, and it has an amazing ensemble cast.

MONDAY MORNINGS doesn’t feel all that much like other doctor shows. It does have a little Grey’s Anatomy thrown in, since it’s about a bunch of medical professionals at the top of their game, mostly surgeons, who do their best, and deal with the consequences when they fail. But most of this group is more seasoned, less skewing towards the young interns. Also, the drama is less soapy, there’s not the focus on sex, and a lot of the action takes place at the Monday morning meeting. It’s a serious program, making the plot engaging and more realistic than others.

The event that the series takes its title from is a weekly meeting where the various staff members gather and rehash cases that went wrong. OK, so it’s not all negative, but that’s what we care about, right? Their decisions are called into question, and they examine their own behavior, with the goal being to make them better doctors. Punishments can be handed out, but aren’t necessarily the focus. It’s the perfect forum to exhibit character growth and raw emotion in, playing up both strengths and weaknesses.

In the first episode, we are introduced to a litany of characters, but each so well played and defined, that viewers already get the impression that they know them. Dr. Tyler Wilson (Jamie Bamber, Battlestar Galactica, Law & Order: UK) is the brain surgeon who is compassionate towards his patients, but doesn’t connect as well with his co-workers. Except for Dr. Tina Ridgeway (Jennifer Finnigan, Better With You, Close to Home), who seems closer to Tyler than her own distant husband. Dr. Sydney Napur (Saraya Rao, Lions for Lambs) understands, having just been dumped by her own guy for being too committed to her work, but it’s her drive for the job, and her willingness to be annoying when she needs to be, that gets the job done. Dr. Sung Park (Keong Sim, Glee, The Last Airbender) is overly blunt, but gifted, and Dr. Buck Tierney (Bill Irwin, CSI, Lights Out) is the pain in the ass. Dr. Michelle Robidaux (Emily Swallow, Ringer, Southland) is new, but she’ll get the hang of it.

This crew is presided over by Dr. Harding Hooten (Alfred Molina, Spider-Man 2, Chocolat), who is a bit of an enigma. We know he is gruff and tough on his staff, but he also shows a caring side to a young patient’s worried mother (Tara Summers, Boston Legal, Ringer). It’s a typical combination for an effective leader, but his intimidation clearly gets the best out of the doctors serving under him, so it’s hard to complain.

The most interesting, and probably the most important, character, though, is Dr. Jorge Villanueva (Ving Rhames, Pulp Fiction, the Mission: Impossible films). He is the soul of the place, and has a personal connection with everyone else. He tells them what they need to hear, when they need to hear it. There are hints in the “Pilot” that he might not be so good at managing his personal life, but he does unofficially handle the entire facility, and it looks like things, and people, would quickly fall apart without him.

It’s because of Villanueva that I really loved this “Pilot.” I enjoy the rest of the characters, to be sure, every single one of the main cast getting time to really shine in episode one. But he adds a layer of something intriguing that isn’t present as firmly in MONDAY MORNINGS’ peers. It’s an abstract quality that is hard to pin down, but it kicks the show up from good to great.

MONDAY MORNINGS is not a case of the week show, nor a medical mystery. There are both present in episode one, but they aren’t the focus. Rather, they are used to tell us something about the characters. This focus on the people is a winning combination in many a program, and is used to great effect here, with such a talented group to play with.