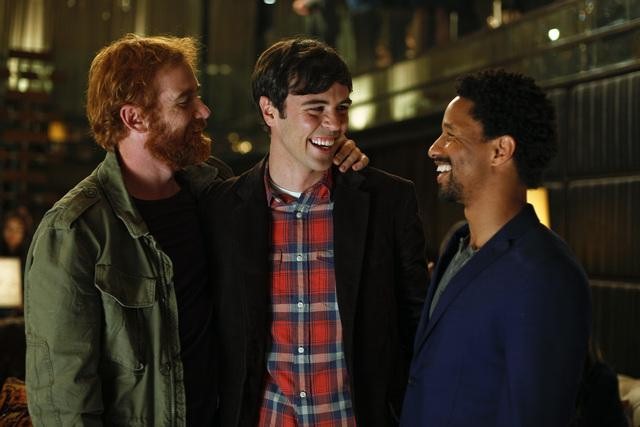 ABC’s MIXOLOGY, a new sitcom about ten single people spending one night in a bar, premieres this Wednesday. In the first half hour, “Tom & Maya,” we are introduced to most of the cast and the premise as Tom (Blake Lee, Parks and Recreation), recently dumped by his fiancé of eight years and dragged out by a couple of friends, hits on Maya (Ginger Gonzaga, Legit), a ruthless, ball-busting lawyer.

MIXOLOGY is a little bit of an anthology series with a tone similar to the quickly canceled Love Bites because it will jump around from person to person each week. But it’s not quite an anthology because the main story only takes up a little bit of the episode, with other players being featured throughout the half hour, too, even when their names aren’t in the title.

This structure is very confusing. The characters are easy enough to tell apart, to be sure, but there’s a lot of them for a sitcom, and the pacing is rapid enough to really prevent the viewer from learning even the names of the characters. After two installments, I’m still having to use the show’s website for help in telling you who these people are.

There’s Tom, of course, and his well-intentioned, but kind of douchey, friends, Cal (Craig Frank, 8.13) and Bruce (Andrew Santino, Crafty). Maya is there to meet her wishy-washy friend, Liv (Kate Simses, What’s Your Number?), who chooses the safe relationship over passion. Jessica (Alexis Carra, Incredible Girl) asks her sister, Janey (Sarah Bolger, Once Upon a Time), to go with her to meet a date she set up online. The man Jessica is meeting turns out to be Brit Ron (Adam Campbell, Touch), who is having the worst day of his life. And their waitress, Kacey (Vanessa Lengies, Glee), tries to break up with the jerk bartender, Dominic (Adan Canto, The Following).

To make matters more confusing, Janey disappears before episode two and is replaced by an annoying friend of Jessica’s, Fab (Frankie Shaw, Blue Mountain State), whom we don’t really get a read-on yet. This means a character who has a touching interaction with Janey has to immediately forget about her and turn his attentions elsewhere. Plus, flashbacks grow the cast even more, making MIXOLOGY one hard show to follow.

Not that viewers will be tempted to try to puzzle it out because there isn’t a single likable character in the whole group to connect through. Tom may be the stereotypical “nice guy,” but he’s a wimp and way too much of a pushover to be the hero. And will anyone really want him to get with Maya after they see just how cruel she can be? It’s not like she’s an obvious happy ending for him. The others are equally flawed and detestable, with horndog men and easily manipulated women who like being put down.

To be fair, the setting of MIXOLOGY, a bar where people come to hit on strangers and many of them just want to get laid, isn’t the ideal place to find good people. Good people go to bars, sure, but the types of friends we’re used to seeing portrayed are either frequenting those establishments while enjoying one another’s company, or are having a bad day and acting a bit out of character. Rarely do they make a habit of trolling. Now, this series asks us to see this as a viable place to find love and change one’s life for the better, and that just doesn’t work.

The premise also extremely limits the structure. As mentioned, the episodes do take time to show us other places and events, but the main story is confined to a single place and time. This will grow old week after week. How I Met Your Mother is getting mixed reviews doing its final season over the course of one weekend. Having multiple seasons, assuming the series goes on for any length of time, on one night is just not tenable. Either it needs some serious changes, or it can’t possibly last.

Two episodes was more than enough for me. I don’t think I’ll be checking back in on it again, assuming it even lasts beyond that pair of installments, which is not a certainty at this point.