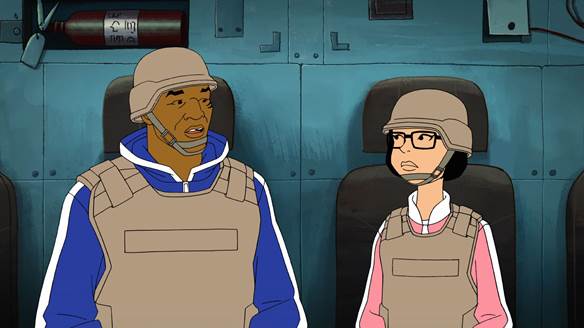 Adult Swim, basic cable’s #1 network in Total Day with adults 18-24, 18-34, and 18-49, announced today the return of the hit animated adult comedy series Mike Tyson Mysteries, which premieres on Sunday, November 1st at 12:15 a.m. ET/PT. This original series from Warner Bros. Animation was a hit in its first season, with 2015 premieres of Mike Tyson Mysteries regularly claiming their Sunday timeslot versus all cable among key adults 18-24/34/49 and men 18-24.

A top destination for comedy programming, Adult Swim had a white-hot ratings summer with double-digit growth over last year led by animated originals Rick and Morty and Aqua Teen Hunger Force Forever. These innovative original programs are continuing to lift the network’s ratings and in addition to being #1 in Total Day with key adult demos, the network was also #1 in Prime with adults 18-24, and 18-34. This summer, Adult Swim consistently beat competitive networks by double and triple digits.

In season two of Mike Tyson Mysteries, the Mike Tyson Mystery Team is back for another season of mystery solving. Mike Tyson, once the “baddest man on the planet,” remains hell-bent on becoming the “goodest man on the planet”…one mystery at a time! But he can’t do it alone. Well, he could, but then we wouldn’t have the best mystery-solving team in the business. First there’s Yung Hee, Mike’s adopted Korean daughter and all-around buzzkill; Pigeon, a filthy disgusting man trapped in the body of a filthy disgusting bird; and Marquess, the ghost whose sole mission is to keep Mike on the path to redemption. His other sole mission: finding a Pinot Grigio that’s bold, but has a crisp finish!

The season two mysteries are even more hilariously banal than season one, as the team tackles tough cases like these: “What really goes on inside a house when it’s being tented for termites?” “Who gave the team a bad review online?” And “Can Mike find a sleeveless/shorts version of tracksuit for the summer?”

Warner Bros. Animation (WBA) is one of the leading producers of animation in the entertainment industry, producing and developing projects for multiple platforms, both domestically and internationally. WBA’s TV series include Be Cool Scooby-Doo!, Teen Titans Go!, The Tom and Jerry Show and Wabbit – A Looney Tunes Production for Cartoon Network, the upcoming Bunniculafor Boomerang, Mike Tyson Mysteries for Adult Swim and the forthcoming Green Eggs and Ham for Netflix. As the home of the iconic animated characters from the DC Comics, Hanna-Barbera, MGM and Looney Tunes libraries, WBA also produces highly successful animated films — including the DC Universe Animated Original Movies — for DVD. One of the most-honored animation studios in history, WBA has won six Academy Awards®, 35 Emmy® Awards, the George Foster Peabody Award, an Environmental Media Award, a Parents’ Choice Award, the HUMANITAS Prize, two Prism Awards and 20 Annie Awards (honoring excellence in animation).

Turner Broadcasting System, Inc., a Time Warner company, creates and programs branded news, entertainment, animation and young adult media environments on television and other platforms for consumers around the world.