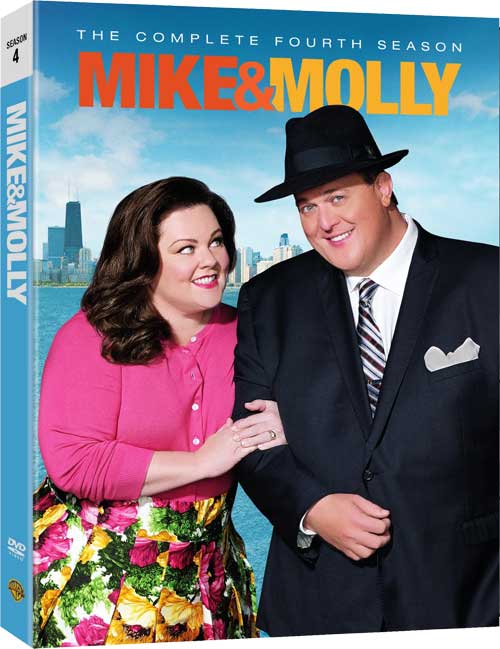 Seat42f and Warner Bros. Home Entertainment have teamed up to give THREE lucky winners a copy of MIKE & MOLLY Season 4 on DVD. For a chance to win leave a comment below telling us why you want to add MIKE & MOLLY Season 4 to your DVD collection. Only one entry per person. Contest ends October 14th. Winners will be notified on October 15th via email so make sure to use a valid email address when you post your comment.

Warner Bros. Home Entertainment (WBHE) brings the fourth season of the hilarious hit comedy Mike & Molly to DVD September 30, 2014. It’s a season full of delightful surprises and exciting adventures for one of TV’s most lovable couples. When Molly (Emmy® winner Melissa McCarthy – Bridesmaids, Gilmore Girls), quits her job as a school teacher to pursue her literary aspirations, her Chicago cop husband Mike (Billy Gardell – My Name Is Earl) supports her decision and encourages her to follow her dream. Together they embark on the next chapter of their lives as their crazy, but comfortable, love story continues to unfold. Mike and Molly: The Complete Fourth Season will retail for $38.99 SRP.

In the Season Four premiere episode, “Molly Unleashed,” Molly abruptly gives up her job teaching elementary school to follow her dreams of becoming a writer. With the support of her family, Molly sets out to become the woman she was always meant to be. This life-changing decision gives way to a fourth season filled with off-the-wall surprises and hilarious escapades, including Molly tagging along with Mike in the squad car for “research,” driving a forklift at Vince’s warehouse and meeting her literary idol (guest star Susan Sarandon). This season, Mike and the rest of the world experience what Molly unleashed can really do!

“Mike & Molly’s fourth season is as fresh, funny and exciting as ever. It’s no surprise the show was quickly able to establish itself as a fan favorite, said Rosemary Markson, WBHE Senior Vice President, TV Brand Management and Retail Marketing. She added, “Melissa McCarthy shines as Molly and the rest of the cast is outstanding. It’s a combination of great casting, smart writing and brilliant performances that make this show truly stand out. We are delighted to offer the complete fourth season on DVD.”

Actress Melissa McCarthy won an Emmy® for her role as Molly in 2011 (Outstanding Lead Actress in a Comedy Series) and has received a second nomination for the same role in 2014.  She also received an Academy Award® nomination for her incredible performance in the hit feature comedy Bridesmaids. In addition to McCarthy and Gardell, Mike & Molly’s talented cast includes Reno Wilson (The Cosby Show, The Hoops Life), Katy Mixon (Eastbound & Down), Nyambi Nyambi (Law & Order), Louis Mustillo (The Sopranos), Rondi Reed (Seinfeld), Cleo King (The Hangover) and Swoosie Kurtz (Pushing Daisies, Nurse Jackie).