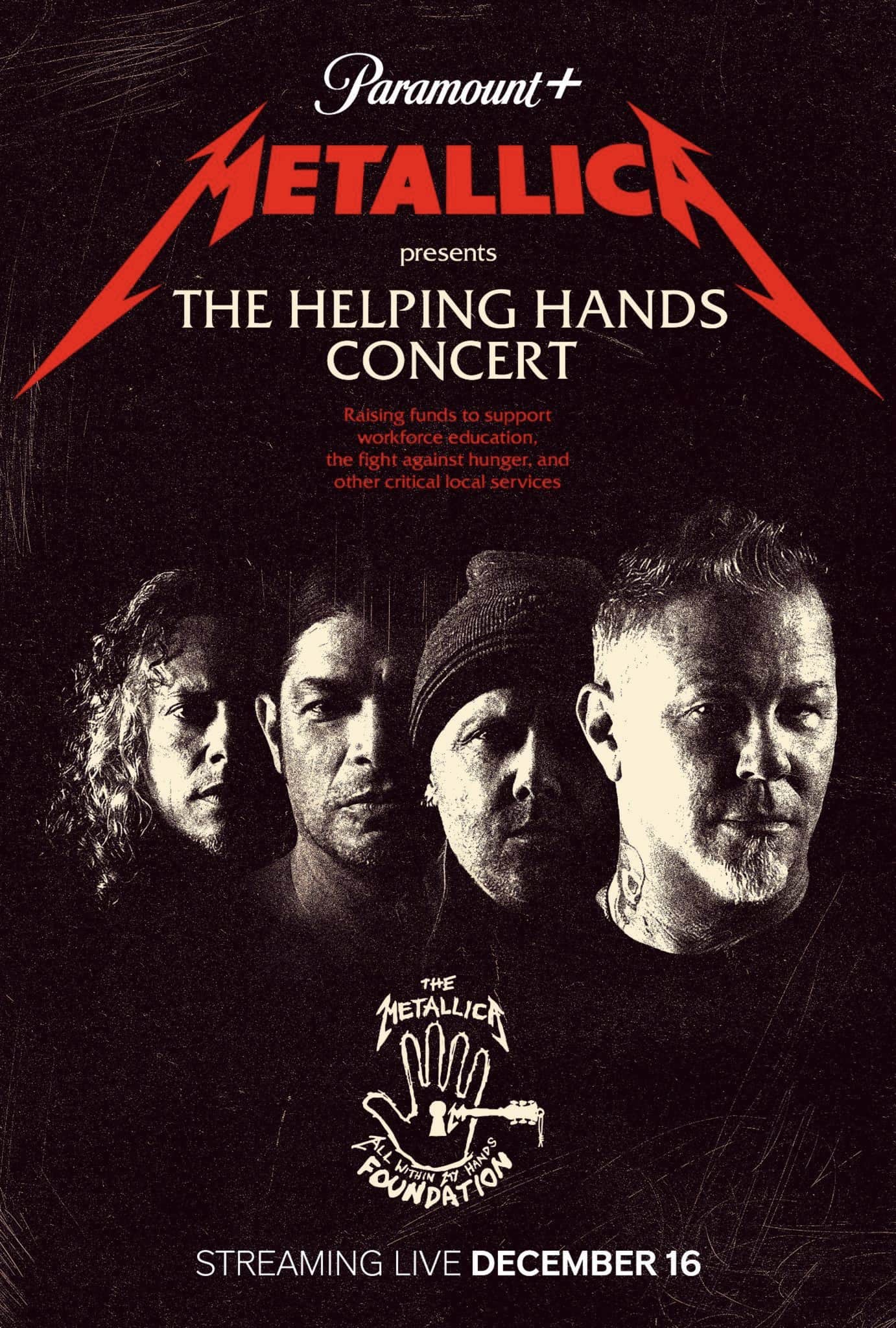 Paramount+ today announced METALLICA PRESENTS: THE HELPING HANDS CONCERT, a live concert benefiting the band’s All Within My Hands foundation, will stream on the service in the U.S. and Canada on Friday, Dec. 16, beginning at 5:30 PM, PT. Hosted by Jimmy Kimmel and taking place at the Microsoft Theater in Los Angeles, the third edition of the Helping Hands Concert & Auction will open with a special set from guest Greta Van Fleet followed by a unique performance from Metallica.

The concert will be available to stream in the U.K., Latin America, Italy, Germany, Switzerland, Austria and France on Saturday, Dec. 17, Australia on Sunday, Dec. 18, and South Korea in 2023. The concert will also be simulcast on Pluto TV globally and on YouTube.

Established in 2017, Metallica’s All Within My Hands foundation works with partners around the world to combat food insecurity, provide funds in areas of natural disasters and support education with the ground-breaking Metallica Scholars Initiative, now in its fourth year. More information can be found at allwithinmyhands.org.

100% of ticket sales and donation proceeds from the Helping Hands concert – and its accompanying auction of items and experiences that goes live Dec. 5 – will go directly to those in need via All Within My Hands. The previous two Helping Hands Concerts in 2018 and 2020 helped to raise more than $3 million dollars collectively.

Paramount+ combines live sports, breaking news and a mountain of entertainment. The premium streaming service features an expansive library of original series, hit shows and popular movies across every genre from world-renowned brands and production studios, including BET, CBS, Comedy Central, MTV, Nickelodeon, Paramount Pictures and the Smithsonian Channel. The service is also the streaming home to unmatched sports programming, including every CBS Sports event, from golf to football to basketball and more, plus exclusive streaming rights for major sports properties, including some of the world’s biggest and most popular soccer leagues. Paramount+ also enables subscribers to stream local CBS stations live across the U.S. in addition to the ability to stream other live channels: CBSN for 24/7 news, CBS Sports HQ for sports news and analysis and ET Live for entertainment coverage.

For more information about Paramount+, please visit www.paramountplus.com and follow @ParamountPlus on all social platforms.

Paramount Media Networks & MTV Entertainment Studios is one of the preeminent media entities in the world that connects with global audiences through its nine iconic brands – MTV, Comedy Central, VH1, CMT, Pop, Logo, The Smithsonian Channel, Paramount Network and TV Land – and its Studios arm which produces acclaimed series and movies as well as award-winning documentaries through MTV Documentary Films.

Formed in 1981 by drummer Lars Ulrich and guitarist/vocalist James Hetfield, Metallica has become one of the most influential and successful rock bands in history, selling nearly 120 million albums worldwide and generating more than 15 billion streams while playing to millions of fans on all seven continents. The band’s several multi-platinum studio albums include Kill ‘Em All, Ride the Lightning, Master of Puppets, … And Justice for All, Metallica (commonly referred to as The Black Album), Load, Reload, St. Anger, Death Magnetic, and most recently Hardwired…to Self-Destruct, released in November 2016 and charting at #1 in 32 countries. Metallica’s awards and accolades include nine Grammy Awards, two American Music Awards, multiple MTV Video Music Awards and a 2009 induction into the Rock & Roll Hall of Fame. In June of 2018, the band was awarded one of the most prestigious musical honors in the world: Sweden’s Polar Music Prize.

About All Within My Hands

Metallica’s All Within My Hands (AWMH) was founded by the members of the band in 2017. The foundation aims to assist and enrich the lives of members of the communities who have supported the band for years, as well as encouraging participation from fans and friends. 100% of donations go directly to AWMH’s charity partners. As always, Metallica covers all administrative costs. To date, All Within My Hands’ collective efforts have raised nearly $12 million – providing $5.9 million in grants to career and technical education programs, over $2.5 million to combat food insecurity, and more than $3.3 million to disaster relief efforts.