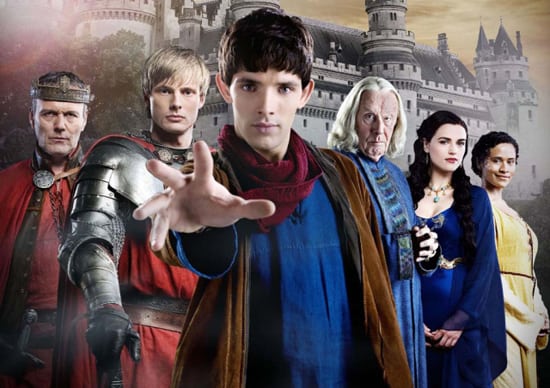 Syfy will say good-bye to Camelot when the fifth and final season of Merlin returns Friday, January 4 at 10PM (ET/PT) with 13 all-new episodes.

As season five opens, Camelot is at the height of its golden age. With Queen Guinevere and the Knights of the Round Table at his side, Arthur has never felt stronger. But even as Camelot flowers, the seeds of its destruction are being sown. As the forces of darkness gather, only Merlin stands between Arthur and a fate that has been written since the dawn of time.

Merlin is produced by Shine TV Ltd and BBC Wales, and distributed by FremantleMedia Enterprises. Johnny Capps and Julian Murphy are co-creators and executive producers.

Syfy Ventures, in partnership with Bossa Studios, also announced the U.S. launch of the official Merlin game under the Syfy Games label. Merlin: The Game — syfy.merlingame.com — is an exciting role-playing game that enables viewers to aid Merlin and Arthur in completing quests, defending the realm and exploring the exciting world of Albion. Gamers can become engrossed in the Arthurian legend as Merlin commands them and six of their best friends to embark on a magical adventure to become the Heroes of Camelot.

Merlin: The Game is the latest addition to the Syfy Games portfolio of games targeting genre fans and core gamers.