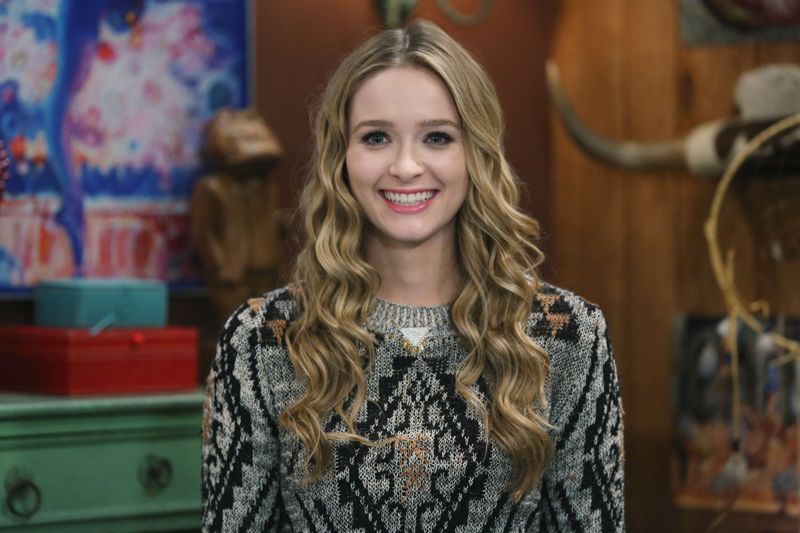 As a fun treat, AWKWARD star Greer Grammer guest-stars on the next all new episode of ABC Family Channel’s MELISSA & JOEY.

In a recent press interview, star Greer Grammer talked about how much fun it is working on the show and teased a bit about what fans can look forward to this season on MELISSA & JOEY.

Are you team McKenna or team Lennox?
GREER: I’m a little biased, but I’d say I’m team McKenna [laughs]. I’m a little torn because clearly I love the relationship that Lennox and Zander have together.  I caught up on the show before I joined, so I think their relationship is really fun and I like the give-and-take of it, but I definitely like McKenna, and I like McKenna and Zander. It’s really fun to see how he falls for her when she’s acting as Cassandra.

What is it like working with Taylor [Spreitler] and Sterling [Knight]?
GREER: So fun.  I’ve known Taylor and Sterling both for about seven years. I met them both when I was 15. It feels like the acting circuit with young Hollywood actors is very small.  So it was really fun to get to work and already know the two people that I was working with really well. There was no awkward moment of “Oh, what do I do when I get to work?” I just was able to jump right in, and Taylor and Sterling were able to make it so comfortable. I am so happy that I finally got to work with both of them.

What is it like on set?
GREER: So much fun!  We just had the best time, and it was so great because Melissa [Joan Hart] and Joey [Lawrence] are both so awesome and so welcoming. It was great because Joey was the director for the first episode that I did. I really wasn’t hanging out with them as much because I wasn’t in their scenes.  But being able to come to the set for the first time and have Joey direct made it that much more welcoming for me with everybody.  It really was one of the best shows I’ve ever worked on, and everyone is so much fun.

Who would you say is the funniest person on set?
GREER: Oh, that’s hard.  Well, Taylor is going to want me to say her [laughs]. Probably Joey, in all honesty.  Joey’s such a big ball of energy, but he’s cracking jokes wherever you go. I say to him “Hey, man, how’s it going?” And his responses are so funny – so I’d probably say he’s the funniest.

What was that like performing in front of a live studio audience?
GREER: This was my first time ever performing in front of a live studio audience, so, it was great!  I grew up doing theatre, and everyone says that multi-camera sitcoms are basically the closest to theatre that you can get. It was also fun, for me, because my dad did Frasier for however many years, so it was cool because I got to go to tapings of his show when I was younger.  The energy that the audience gives you is just so great, and their laughs and the way they clap, and it’s just a whole different thing when you’re on the other side of the camera that’s so much fun.

What is your favorite scene that you’ve been in so far?
GREER: That’s a hard question! [Laughs].  Honestly, it was my first scene with Taylor in the bedroom, because you get to see the switch.  I got to be two characters.  I got to be McKenna as McKenna and McKenna as Cassandra, which was really fun because McKenna is a lot like Lissa on AWKWARD.  Cheerleader, peppy, fun, upbeat, high voice.  So it was interesting to get to go to my normal voice, which is deeper, and to get sluggish and edgy.  I really enjoyed it.

Would you say you are more like McKenna or Cassandra?
GREER: I’m a combination of the two, if that makes sense.  I’m really peppy inside and bubbly, but I can also be really chill, cool, and down to earth.  It’s a hard mix.  Maybe McKenna [laughs].

If you could be on any other ABC Family show, which one would you want to be on?
GREER: Oh, that’s a good one.  Probably PRETTY LITTLE LIARS.  I feel like that’s probably a common answer.  It would be so different from anything I’ve done before.  It’s dark and it’s scary at times, so that would be really fun.

Would you ever want to be in a drama?
GREER: Oh, yes, absolutely!  I love comedy, but I would love to do a drama.  I’d love to get to do something darker and scarier [laughs].

What is your general favorite ABC Family show?
GREER: That’s a hard question. Probably MELISSA & JOEY.  I started watching more recently, when Sterling joined.  I caught up right before I started filming, because I really needed to watch how Taylor acts, because Cassandra is based a lot on Lennox.  It’s so funny and the writing is so great. Melissa and Joey’s chemistry is so good together, and I really love it.

Do you and Taylor hang out off set?
GREER: Yes.  Taylor had a fun Christmas party last year that we went to, and we’ve gotten together and hung out a couple of times.  We keep talking about doing karaoke [laughs]. We hang out a lot.  I love Taylor.

Do you enjoy live-tweeting with Taylor and the fans during the episode?
GREER: Yes.  Taylor’s a master at it at this point.  I’m just trying to keep up! [Laughs].  But it’s really fun.  I love live tweeting, and I love being able to interact with the fans and get to watch it for the first time as they’re watching it, even though I know what happens.  It’s fun to be in the room with Taylor and for us to be live tweeting.  I feel like we talk more at commercials, because we’re both sitting there on our phones or computers trying to pump out as many answers as possible [laughs].

Is it hard not to give stuff away?
GREER: Yes.  It’s really hard.

Do you have any hobbies or things you like to do in your spare time?
GREER: I bake.  I love to bake cupcakes and banana bread.  Those are my two favorites.  I do yoga and I work out.  I watch Netflix a lot in my spare time.  I usually sit on the couch, with a bowl of popcorn and watch Netflix. Those are great nights [laughs]. I try to go on adventures to the beach or try a new restaurant.

Do you have a favorite Netflix movie or series?
GREER: I’m obsessed with SCANDAL.  I’m all caught up now, so I don’t really watch it on there, but I binged-watched all of GILMORE GIRLS and now I’m rewatching FRIENDS.

Can you tease anything about Zander in the next two episodes?
GREER: You get to see Lennox find out about what happened in last week’s episode – the kiss, and maybe some more. So you’ll get to see how that affects the business relationship, and the professionalism of the set. You get to see their flirtation and relationship grow and see what happens from there.

To see what kinds of hilarious hijinks Greer brings to the show, be sure to tune in for an all new episode of MELISSA & JOEY on Wednesday, June 24, 2015 at 8:00 p.m. on ABC Family Channel.