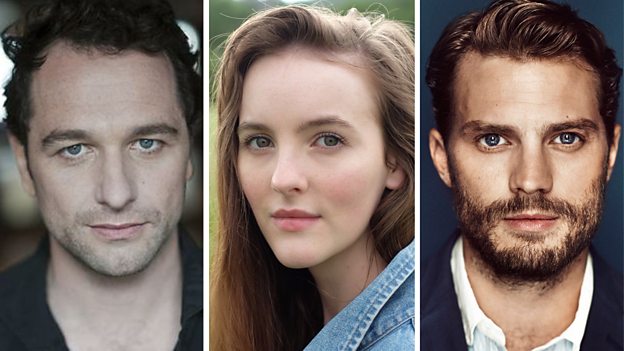 Made by Imaginarium Productions and Soho Moon, Jamie Dornan (The Fall, The Siege Of Jadotville) and Matthew Rhys (The Americans, The Post) will return to the BBC to lead the cast of Death And Nightingales, joined by Ann Skelly (Red Rock, Kissing Candice).

The three part drama is adapted and directed by Allan Cubitt (The Fall).

Based on Eugene McCabe’s modern Irish classic, Death And Nightingales is a riveting story of love, betrayal, deception and revenge, set in the beautiful haunting countryside of Fermanagh in 1885. A place where neighbours observe each other and inform, a world of spies, confessions and double dealing; where a pervading sense of beauty is shot through with menace and impending doom.

Set over a desperately tense 24- hour period, it’s Beth Winters’ (Ann Skelly) 25th birthday – the day she has decided to join the charming Liam Ward (Jamie Dornan) and escape from her limited life and difficult and complex relationship with her Protestant landowner stepfather Billy (Matthew Rhys). As decades of pain and betrayal finally build to a devastating climax, Death And Nightingales is a powerful and gripping drama that follows a woman struggling to control her own destiny and will illuminate tensions that tear both families and nations apart.

Matthew Rhys says: “I’ve been a huge fan of Allan Cubitt’s work for many years so I’m thrilled to have been given the chance to work on Death And Nightingales alongside Jamie and Ann and return to the BBC.”

Jamie Dornan says: “I’m thrilled to be reunited with Allan and his brilliant scripts to play such an intriguing character like Liam Ward and to return to Northern Ireland and BBC Two”.

Ann Skelly says: “Playing such a strong character as Beth Winters is truly an actor’s dream, and a fantastically intense challenge to be given the opportunity to play. And to get to work with such brilliant actors like Matthew and Jamie, and a director like Allan Cubitt, is just surreal to me. I can’t wait to start!”

Jonathan Cavendish, Producer, says: “We are thrilled to combine the wonderful talents of Matthew Rhys and Jamie Dornan with the remarkable new star in the making Ann Skelly”.

Tommy Bulfin, Executive Producer for BBC Two, says: “With the phenomenal Ann Skelly cast as Beth and with Jamie Dornan and Matthew Rhys returning to the BBC, to have a cast of this calibre on board for Death And Nightingales is incredibly exciting. I can’t wait to see them bring Allan’s brilliant scripts to life”.

Death And Nightingales is a 3×60’ drama series adapted and directed by Allan Cubitt. It is an Imaginarium and Soho Moon production for BBC Two. Commissioned by Patrick Holland, Controller of BBC Two and Piers Wenger, Controller of BBC Drama, the Executive Producers are James Mitchell for Soho Moon and Tommy Bulfin for BBC Two. Produced by Jonathan Cavendish (Breathe), Death and Nightingales is supported by Northern Ireland Screen and Red Arrow Studios International will distribute worldwide. Filming will begin in Summer in Northern Ireland.