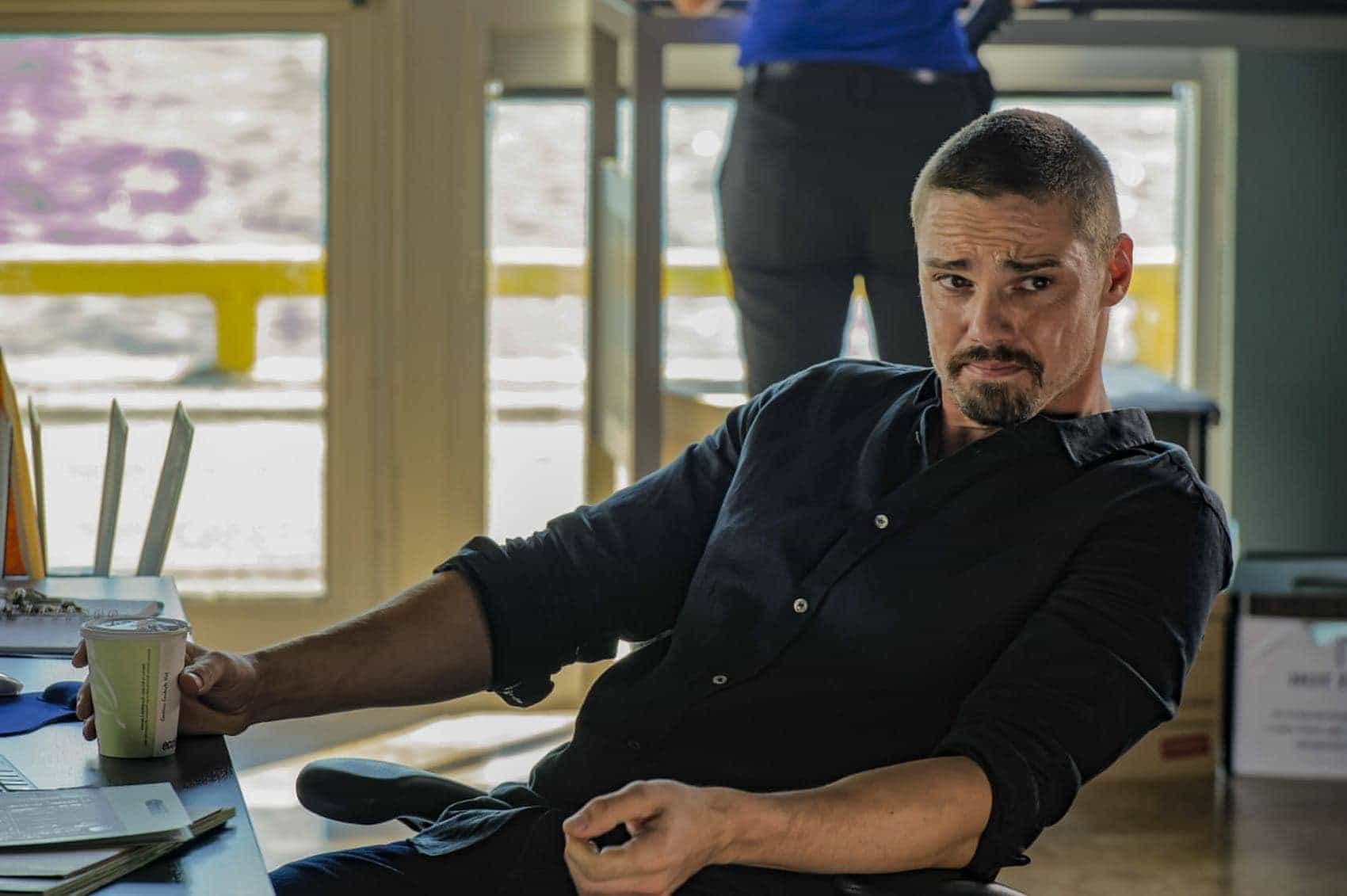 Bringing his radiant energy and joy to a role that slowly peels back its fascinating facade and reveals a deeply layered and rich dichotomy of contradictory emotions, Jay Ryan is more than simply riveting in MARY KILLS PEOPLE, he is downright addictive. It will be easy to see how and why Mary, as phenomenally portrayed by Caroline Dhavernas, falls immediately under his character’s spell, which subsequently leads to a taut game of cat-and-mouse.  In an exclusive interview, Jay Ryan talks about his fascination with MARY KILLS PEOPLE and shares his perspective on his incredibly rich and rewarding career, so far.

What initially appealed to you about the role of Ben and working on MARY KILLS PEOPLE?
JAY:  A dynamite script! It was refreshing to receive a pre shooting script in such tight form, with a sensational female protagonist that I had never seen framed in such a light before – it oozed a tone like no other and I felt this really was truly ‘Original’ content from the mind of a very talented individual. The role of ‘Joel’ came with a responsibility that shocked me when I read the final pages of Tara’s script. I didn’t see it coming and that ‘edge of your seat’ feeling was just as exciting to read as it is to watch this series.  Also knowing that it was all to be helmed entirely by one director (Holly Dale) over the entire project was very appealing. There were very clear visions of what we were making from the beginning.

How would you describe who Ben (aka Joel) is?
JAY:  ‘Joel’ as we meet him for the first time is struggling – struggling to be good at what he does and struggling to convince Mary that the best thing for him and his situation is to die with some sort of dignity.  He’s a bit of a lonely soul and Mary manages to shake his guard just enough, before they both make big mistakes.

What do you most admire and/or like about Ben?
JAY:  That he’s a trickster with a heart of gold.

What is it like working with such a strong ensemble cast?
JAY:  Brilliant. Strong cast, strong crew, strong creative team! I had the pleasure of mostly shooting alongside Caroline [Dhavernas], Richard [Short] and Lyriq [Bent] who are all phenomenal pros – previewing the series, I was in awe of every single character in this show, the guest cast, the girls who play Mary’s daughters, Charlotte Sullivan, Greg Bryk as Grady — everyone compels and moves the story on a deeper level.

You have a number of scenes with Caroline Dhavernas. What was it like filming those scenes with such an under-current of sexual tension and verbal sparring?
JAY:  It felt bloody good. When so much is given to the actors already within these scripts — there is a calmness that the work can come from in rehearsals. We didn’t have to panic and search for how to make it tick, it all very freely came giving us room to add and experiment with what we could give one another in each moment.

In the cat-and-mouse game between Ben and Mary, is Ben secretly rooting for Mary or does he really want to catch her?
JAY:  That is the question! I hope we keep you guessing until the final episode.

What has been your favorite part about working on this project?
JAY:  The collaborative approach from the very beginning — Tassie and Amy Cameron assembled a divine team and are true and hungry storytellers themselves. But at the end of the day everyone was on the same page, out to make a work we all believed in lead by the phenomenal Caroline Dhavernas — what more could you really ask for.  This show has a strange warm humor to it with a taste of the ‘thriller’ genre and it was exciting to tackle from such a new perspective.

What you have learned from the show and its thought-provoking point of view on the right to die?
JAY:  Everyone has their own valid reasons for where they stand on the subject. It’s a very tricky debate — but if you honestly ask yourself the question “would I want the right to go on my own peaceful terms” and do away with terminal suffering, can you answer?  If good honest Palliative care was accessible to all those in need, then perhaps there would be no warrant for Mary’s little business.

What has been the one thing you as an actor haven taken away from working on MARY KILLS PEOPLE?
JAY:  Life is short — choose good scripts.

What do you hope viewers continue to take away from watching MARY KILLS PEOPLE?
JAY:  The pure feeling of being solidly entertained and connected to a well told story.

Did working on MARY KILLS PEOPLE require a bit of a brain-switch after portraying Vincent on BEAUTY AND THE BEAST?
JAY:  I had at least 6 months between finishing one and starting the other. Because of the way the character’s health is revealed in the first episode of MARY KILLS PEOPLE, I had to switch off from training and eating like a CW super-hero and drop some kilos and live a little to complete the transformation to Joel — a dying loner with a cool old truck. Yes, I immensely enjoyed it.

What has surprised you most about your career so far?
JAY:  That I’m still lucky enough to be in a profession and industry where boarders are crossed and mixed with different artists collaborating from all parts of this world.

At this stage of your career, what do you think you have learned from the amazing variety of roles and projects you have worked on?
JAY:  Keep every door open until you find the most inviting room.

Then what are the perks of where you are in your career right now?
JAY:  I get the luxury to travel to many different places around the world with my family and immerse ourselves in a new community of creators every 6 months or so. We love it!

If there were one role you would like to revisit, which would it be and why?
JAY:  I really would like to see where the Mitchum Brothers from TOP OF THE LAKE ended up a few years down the track after the end of Season 1.  I had the opportunity to return for Season 2, but the scheduling didn’t work out traveling between Toronto and Queenstown.   I’m cheekily hopeful. There’s a lot more story there, I remember Jane Campion toying with some ideas about those two characters’ futures when we shot the first season.

You seem to take on roles that are very challenging. Do any of your characters and the situations they find themselves in ever leave a lasting impression on you?
JAY:  I’ve played many roles. Each has a place in time.

Has there been any great advice you have gotten?  What advice would you offer to other upcoming and aspiring actors?
JAY:  Curiosity and empathy are key.

Do you have any other upcoming projects that you can share that fans should keep an eye out for?
JAY:  I’m just about to start work on another brilliant original 6 parter in Australia titled “Fighting Season” from the creators behind Sundance TV’s “Cleverman.” A very different role for me to tackle. Wish me luck!

To see the sexy, and deceptive complex role that Jay portrays in MARY KILLS PEOPLE, be sure to the in for the premiere on Sunday, April 23rd at 10:00 p.m. on Lifetime.