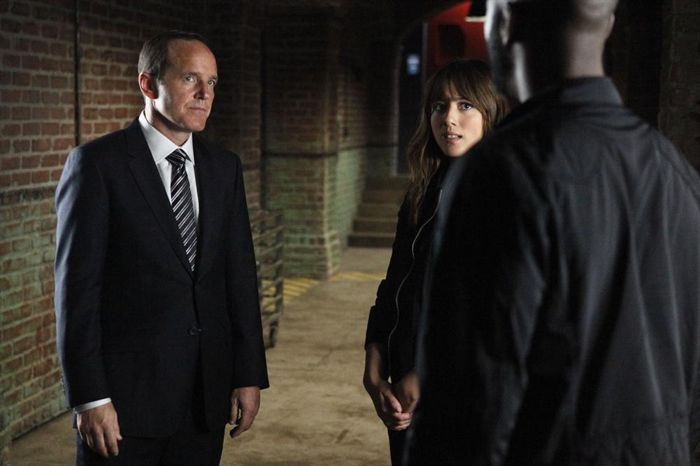 Season 2 picks up a few months after the Season 1 finale and our heroes are fighting for their own survival.  Hunted as if they were criminals as vile as Hydra itself, Coulson (Clark Gregg) and his team have taken up residence in a new secret lair, the Playground, with minimal resources.  Unaccustomed to being without the computer technical resources and weaponry necessary to protect themselves and to help the rest of the world, Coulson and his team must first find a way to re-establish S.H.I.E.L.D. and prove that it can save the world once again.

Season 1 Aftermath
JEFF: Hydra happened and we lost our big Triskelion, and we lost all our toys. We lost our authority and the ability to use our badges.
JED:  But we also gained, in that happening, we gained the ability to have spies in our organization — moles — and that was something we could not really do before the reveal of Hydra.  So that is more a throw back to spy versus spy stuff.
JEFF: For us, it’s really hard to cheer for the NSA. They can listen to every phone.  They have everything. So we really feel like the team is much more like underdogs this year.  They really do have to say: “This is what we have. How can we make it work?”  So the stakes are much higher because of that, and we think it is easier to cheer for the team when the stakes are higher.  We also like the way it feels texturally too.  It’s a way to start fresh.
CLARK:  [Coulson] has his hands more than full rebuilding S.H.I.E.L.D. — and just trying to get the George Foreman Grill to work.

Fitz’s Mental Fragility
IAIN:  A lot of research was done for me before and I had a good chat with the writers, and I had done a little bit as well.  Something like that which has affected people in real life, there’s a bigger responsibility towards it.

Simmons Leaving the Team
ELIZABETH:  (Laughs) What could she do?  I guess, wait and see.

Ward Locked in S.H.I.E.L.D. Basement
BRETT:  Can I throw this question to the writers?  I’m not sure what’s next for Ward.
JED:  He will appear and things will happen.
MAURISSA:  You saw that he was in the basement.
JEFF:  And when you have a monster in the basement, generally that’s a problem.

Ward Manipulating Skye or Genuinely Cares For Her
BRETT: That’s one of the wonderful things about this season, that there is so much complexity and all of them have gone through so much.  But I’m going to say: Yes, to all of the above. There’s a lot going on there.

Skye’s Evolution
CHLOE: It was really weird to see the difference between the pilot and episode 201.  Skye is just completely different. She was this kind of hippie living in her van, against S.H.I.E.L.D. and everything it stands for, and then she’s just a full-blown S.H.I.E.L.D. agent dropping from the ceiling in the beginning of episode 2.

New Faces
MAURISSA:  It may seem like we’re adding a lot of new people, but it is just an example of what S.H.I.E.L.D. is now. We are seeing Mac (Henry Simmons), who might have been a mechanic at the Triskelion and we never would have heard from him before, but now he’s a part of our team.

The Blue Box
JEFF:  I think you know us well enough to know that we just don’t put “anything” in there.
MAURISSA:  It’s not just for kicks.

One of the more thought-provoking questions was posed to Clark Gregg about whether or not Coulson can still be called “human” after his miraculous resurrection last season with the use of alien technology.  He said that is the question that hovers around Coulson and echoes throughout Season 2.  So be on the look out for those clues and be sure to tune in for all new episodes of Marvel’s AGENTS OF S.H.I.E.L.D. on Tuesdays at 9:00 p.m. on ABC.