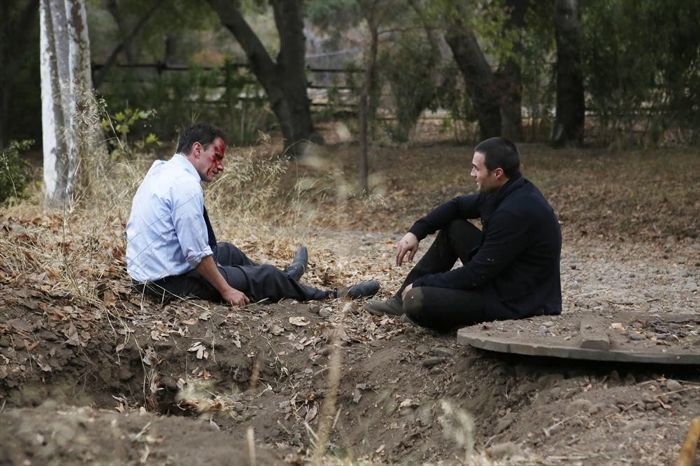 ABC’s MARVEL’S AGENTS OF S.H.I.E.L.D. looks into “The Things We Bury” this week. Coulson (Clark Gregg) pushes the team to find the city he’s been sketching, which draws them into a secret about Hydra hidden for decades. At the same time, Ward (Brett Dalton) pays his brother, Christian (Tim DeKay), a visit to talk about a troubling childhood memory.

Little did viewers know that when Ward tells a story of brothers at a well last year that it would have such lasting effects. It’s a tragic tale, to be sure, but one that has apparently stuck with Ward even more deeply than he let on. Having escaped from confinement, he captures his brother and forces Christian to admit the truth about what happened. For some reason, it’s vitally important to Ward that Christian fess up.

But with Ward clearly off his rocker, is Christian finally admitting something he lied about, or is he just saying what Ward wants to hear? That’s impossible to tell. We know this event hurt Ward, but we don’t know why yet. Is this something intended to be explored further, which it begs to be, given its importance to a core character? Or will it be dropped now that Christian is (unfortunately) dead, the purpose Ward needed him for fulfilled?

Everything in MARVEL’S AGENTS OF S.H.I.E.L.D. seems to come back around, which gives me hope for the above question. More central to this element in “The Things We Bury,” though, is Daniel Whitehall (Reed Diamond). Daniel is alive back in the time of Agent Carter (Hayley Atwell) and the founding of S.H.I.E.L.D. This installment shows his experiments with the obelisk, his triumphant mission to unlock the secrets of youth from an ageless woman (Dichen Lachman, Diamond’s Dollhouse co-star, also killed off too soon), and how he escapes confinement, decades after being locked up.

Whitehall is a great villain because of the rich history and his connections to the past. “The Things We Bury” gives us a quick version of his story, and may be the only exploration of his past we’re going to get. But it’s enough. We understand his motivations, we understand his arc, and we understand what our heroes are facing. What a terrific, developed character!

Whitehall works through agents, though, rather than running into the field himself. When Coulson and company arrive at a base in Australia to search for the lost city, it’s not Whitehall who is there to confront them, but Skye’s father, The Doctor (Kyle MacLachlan). The Doctor is a cool henchman because he has his own purpose and goals, but serves Whitehall well at this juncture. There is always the potential for The Doctor to step up into his own, however that seems unlikely, given the way he interacts with others. He likes to manipulate and play games, but he doesn’t seek to conquer anyone. At least not yet. The city could change that.

I do wonder if Coulson should take a lesson from Whitehall about sending others to do the dangerous work. Coulson is a good man who wouldn’t ask his people to do anything he wouldn’t do, which is fine. And he’s eager to uncover the truth, so has a hard time holding himself back. But he is the director of S.H.I.E.L.D. now. That’s an important position in an agency that’s only beginning to rebuild itself. I’m not saying it wouldn’t find a way to go on without him, but right now he’s pretty instrumental in what S.H.I.E.L.D. is doing. He shouldn’t be on the front lines. He’s too important.

“The Things We Bury” is a solid episode with lots of fun moments, which MARVEL’S AGENTS OF S.H.I.E.L.D. wonderfully blends together with the darker and more dramatic plots. I love the tension between Bobbi (Adrianne Palicki) and Hunter (Nick Blood), and how that resolves. It’s cool how Fitz (Iain De Caestecker) worries us when he can’t quite hit a time target, only to reveal he’s healed enough that he’s been using his bad hand to challenge himself. These little bits give the series that special kick it needs, and combined with the whole, make for a show I usually look forward to watching.