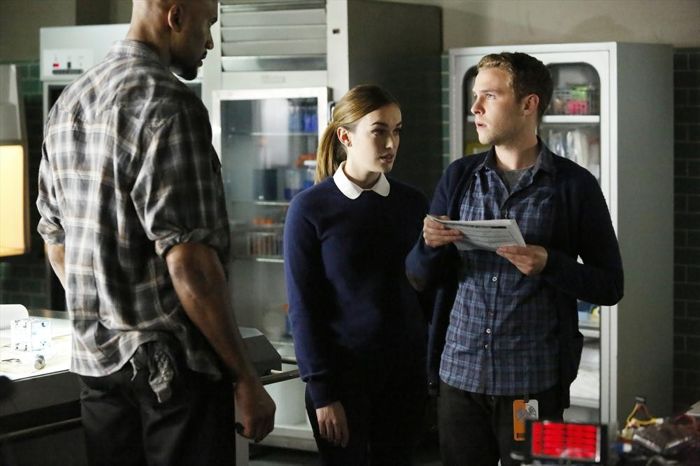 MARVEL’S AGENTS OF S.H.I.E.L.D. continues its new-found darkness in this week’s episode, “Heavy is the Head.” Reeling from the deaths of Hartley and Idaho, Hunter (Nick Blood) considers making a deal with Talbot (Adrian Pasdar) that will not only keep him from being hunted, but also leave him living comfortably, though it means betraying S.H.I.E.L.D. Meanwhile, Skye (Chloe Bennet) grows suspicious of what Coulson (Clark Gregg) may be hiding, and Mack (Henry Simmons) makes a break-through with Fitz (Iain De Caestecker).

MARVEL’S AGENTS OF S.H.I.E.L.D. wastes no time in exploring the new main character of Hunter. While it is a fast-paced series with an expanding cast, Hunter is firmly established as a lead this year with a major focus these first two weeks. Some viewers will be disappointed that he’s more central than established favorites, but it’s a way for the show to help him immediately take root in the action, and it works for that purpose.

Hunter is forced to choose between S.H.I.E.L.D. and Talbot. What we know about the character so far is that he’s a mercenary, and while we’re told he’s been with the team for awhile, we haven’t witnessed that. But Coulson obviously trusts him to some extent, allowing him to work with his people, and even when Hunter proves untrustworthy, putting the good guys to sleep so he can go after Creel (Brian Patrick Wade) for revenge, Coulson still trusts him. That says something about him, as does his obvious care for his fallen comrades, and should earn him the benefit of the doubt in the future.

However, is Coulson trust-worthy? Skye doesn’t think so, sensing there is something off about him, more so than just trying for the detachment of a leader. She may be a S.H.I.E.L.D. agent now, and thus more apt to follow orders, but there’s still some of the old Skye in there, a girl that won’t let go of something nagging at her. Coulson does right by his job in not coming clean to her, even with his new emphasis on sharing information, eliminating the old levels system, but I can’t help but feel that’ll bite him in the butt in the end.

At least Coulson has let May (Ming-Na Wen) in on the secret. His judgment is iffy, that much is clear, especially when he hasn’t had a crazy wall-carving session in awhile. Thankfully, May is present to watch and document it when it does finally happen, and make sure Coulson stays on track in general. She still defers to him in the field, but she’s also aware of the entire situation, more so than the rest of the team. It makes one feel a little better to know that she has Coulson’s back and can probably stop him if he goes too far.

I really like the scenes between Mack and Fitz. They have a completely different dynamic than Fitz has with the still-absent Simmons (Elizabeth Henstridge). It works, though. And the more Fitz speaks with Mack and comes to rely on him for feedback, the less he hallucinates Simmons. This can only be good for Fitz’s recovery, and the breakthrough he makes in adapting a device to stop Creel is a sign that the genius is still somewhere in there. Fitz’s road back to normal may be a long one, but Mack’s patience and help has allowed it to progress.

So now the question is, where is Simmons?

Fans of MARVEL’S AGENTS OF S.H.I.E.L.D. are likely excited to see the return of Reina (Ruth Negga) in “Heavy Is the Head.” No longer a member of Hydra, she’s still up to no good in her theft of the artifact. But what are her motivations? She’s working with a mysterious man (Kyle MacLachlan, Portlandia, Sex and the City) who <SPOILER ALERT!> is Skye’s father. What are they up to, and how will that affect S.H.I.E.L.D.?

The chaos of this season of MARVEL’S AGENTS OF S.H.I.E.L.D. is terrific. Reina and the man add to the already jumbled field of play where Hydra, S.H.I.E.L.D., and the government battle. With more references to the 1940s and a large cast of frequently recurring players, the show is now on a larger scale than most of season one, and is telegraphing another big event. I don’t know what’s coming this season, but there’s definitely something in the works, given all the components and hints that are constantly coming out. How can watch and not be super excited, even if slightly frustrated that we only get little bits and pieces at a time? It also helps that there are a number of terrific scenes along the way, such as the confrontation between Coulson and Talbot in “Heavy Is the Head.”