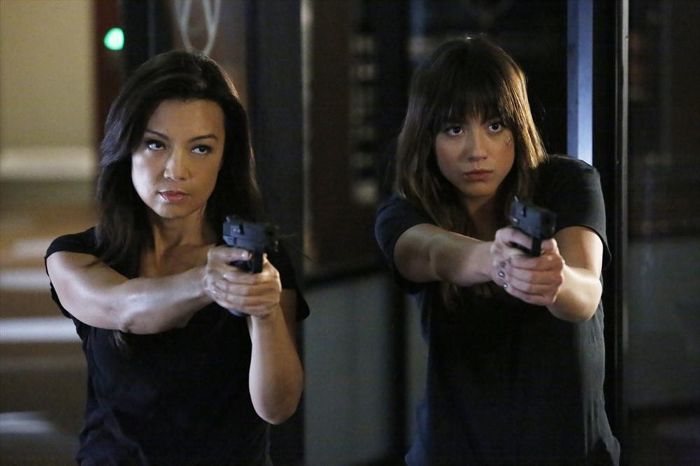 MARVEL’S AGENTS OF S.H.I.E.L.D. tees up a heck of a winter finale next week in its latest installment, “Ye Who Enter Here.” The team locates the hidden city and immediately goes to it, Hydra hot on their heels. Secrets are stumbled upon and the game unfolds unpredictably as the show rockets through plot at a quicker pace than it ever has, while still maintaining some good character-driven stuff.

It’s hard to tell how many of Whitehall’s (Reed Diamond) moves are planned and how many are on the fly in “Ye Who Enter Here.” He uses the S.H.I.E.L.D. tracking device in Raina (Ruth Negga) to follow her to the city and get her back, but is that something he figures out late in the game, or does he set Raina up in an elaborate machination? It certainly seems like Whitehall is thinking on his feet, which is a welcome leveling of the playing field, Hydra having been working at a distinct advantage for most of the season.

Of course, that advantage may be regained by the end of this hour. With both Raina and Skye (Chloe Bennet) in Hydra’s clutches, thanks to a newly recommitted Ward (Brett Dalton), Hydra hovers over the mysterious location and has The Bus at its mercy. At this point, Whitehall might be smart to kill everyone, which is exactly what he orders, though we don’t yet have the chance to see it play out.

Certainly the entire S.H.I.E.L.D. team will not be killed; without them, there would be no show. However, MARVEL’S AGENTS OF S.H.I.E.L.D. doesn’t shy away from knocking its leads out of their current orbits. Ward’s reveal as a villain is an example of that, and in the latest installment, Mac (Henry Simmons), who is not a main character but has become a much-valued member of the team this year, is changed, possibly forever, and possibly killed.

We’ve only scratched the surface of the hidden city so far. Mac is the first one down, after the drones lose power, and he transforms into some kind of super human. We don’t know why or how yet, but no amount of pleading with him will awaken the real Mac from this berserker body that attacks everyone else. The confrontation ends with Bobbi (Adrianne Palicki) accidentally sending Mac falling down a shaft, which he may or may not survive, given his new state.

Coulson (Clark Gregg) seems a little callous when he tells Bobbi simply that that wasn’t Mac. He’s right, but we don’t know if Mac still exists inside the body or if Mac’s personality can come back to the surface. I certainly hope it does, as I would miss that character. But I’m more disturbed by Coulson’s transformation than Mac’s, as Coulson needs to still care deeply about his people, even if he’s finally finding the distance of leadership he also needs.

If Mac is gone, Fitz (Iain De Caestecker) is in trouble, as Mac is the one friend keeping Fitz going. Fitz and Simmons (Elizabeth Henstridge) finally talk about the state of their broken relationship, but rather than hammer it out and make up, Fitz announces he’s transferring to the garage with Mac. It’s a heart-breaking development, even if it makes sense, because Mac really helps bring Fitz out of his shell and begin to heal. If Mac is out of the picture, Fitz might need Simmons back, whether he wants to admit it or not.

There are signs that a reconciliation is possible. Simmons has her own friends, too, sharing great scenes with Trip (B.J. Britt) and Bobbi in “Ye Who Enter Here.” But she also has time for Fitz, and seems less happy with the dissolution than he does, a decision he makes unilaterally. She still finishes his thought at the city entrance, so their bond is still there. I just can’t believe they are fully over, in large part due to the truly excellent chemistry the two performers share.

I can’t help but feel that Skye is key to what will happen next. She’s now a prisoner, but this week’s episode shows she’s progressed enough in her combat training to handle herself in a tough spot, so that’s not super worrying. Raina makes a number of references to Skye being special, something more than human, but not alien. Fans of the Marvel comic books are full of theories about Skye’s connection to the Inhumans, a subspecies of Homo sapiens created by the Kree, who are mentioned in “Ye Who Enter Here.” That is fascinating and I’m excited to see what introducing the Inhumans will do not just MARVEL’S AGENTS OF S.H.I.E.L.D., but the whole Marvel franchise. However, I’m much more interested in Skye’s personal journey and how it may shift due to this.

I can’t end my review without mentioning how awesome it is to have Patton Oswalt playing not one, but two Agent Koenigs this week. The humor he brings to the proceedings is simply invaluable, and the man simply radiates talent. He is able to get a bit dramatic when confronting the killer of one of his brothers, and I think that’s a good layer for the Koenigs to have, but it’s also very valuable to have him tease others about how many brothers there are and have each of the two siblings featured this week claim the other is shorter. This is gold that show should continue to mine. He would make a valuable main character addition if they can lock him down.

MARVEL’S AGENTS OF S.H.I.E.L.D. has had an interesting fall run, perhaps not as intense as last spring’s story, but with some wonderful fresh faces and the foundation of another big arc. I am confident that next week’s fall finale is going to be a memorable one.