MARVEL’S AGENTS OF S.H.I.E.L.D. Recap Season 2 Episode 5 A Hen in the Wolfhouse 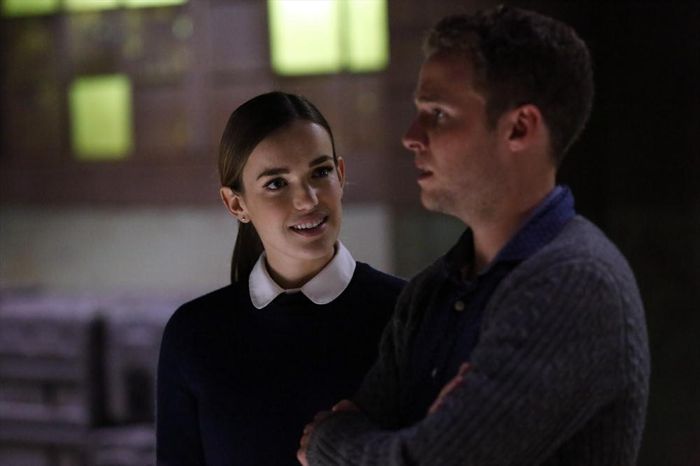 MARVEL’S AGENTS OF S.H.I.E.L.D. pumps up the fan base with last night’s episode, “A Hen in the Wolfhouse.” In the exciting installment, much comes together as several of our central cast are imperiled or find their secrets dragged out into the open. Relationships are paid off and the danger level is heightened, which is probably what viewers of the superhero film spin-off have been hoping for.

To start with, Simmons’ (Elizabeth Henstridge) position within Hydra is compromised at the worst possible time, just after the evil new security chief, Bobbi Morse (Adrianna Palicki, Friday Night Lights, About a Boy) shows up to hunt down a mole. Corned by Bobbi, things look dire for Simmons, and one can imagine this poor women being tortured. Simmons isn’t built for torture.

Then, lo and behold, Bobbi is secretly S.H.I.E.L.D., too, sent by Coulson (Clark Gregg) to protect Simmons! This not only shows us that Coulson still does are deeply about his people and makes backup plans for them, something in doubt in his new role as he distances himself, but also leads to some really great action sequences as Bobbi gets them away from Hydra. Not to mention, Hydra has been beating on the good guys, and “A Hen in the Wolfhouse” shows S.H.I.E.L.D. winning a hand. It’s gratifying all around.

Bobbi is a fun character, tough and caring, totally badass. Most of the team quickly takes to her when Coulson announces she’s joining them. The exception is Hunter (Nick Blood). Bobbi, it turns out, is the awful ex-wife Hunter constantly moans about. Is Hunter’s bitterness justifiable? We aren’t yet privy to the details of their union. It seems like Bobbi doesn’t hold the same grudge, since she is the reason Coulson recruited Hunter in the first place. Still, it’s great to see entertaining conflict between the two characters.

Another clash comes as Skye (Chloe Bennet) continues to push Coulson to reveal where the symbols she’s working on are coming from. Coulson is defensive, even after May (Ming-Na Wen) recommends he come clean, a real sign as to how much May has warmed to Skye. Eventually, Coulson has no choice because Skye is smart enough to figure things out, and soon she’s in the loop.

I like the tension between Coulson and Skye. Coulson is a good father figure to the young agent, whose own father (Kyle MacLachlan) hasn’t been around. Skye is angry that Coulson shuts her out, as she should be, but Coulson has his reasons. I see why May wants Coulson to bring Skye into his confidence, as she can help, but I also see why he resists, not just to cover his own butt, but to keep a needed hierarchy in place in the organization. It’s a complex situation, one MARVEL’S AGENTS OF S.H.I.E.L.D. handles well, from the fall out to the confirmation that the fighting doesn’t destroy their underlying bond.

Another mystery opens up with this development, though: Skye has taken the same drug Coulson took, so why isn’t she scratching symbols? Skye’s backstory has been a long-running mystery on the show, one in which we only get small pieces at a time. By relating this now, and having her psychotic villain dad looking for her, the show is signaling a deeper delve into things. Given her father’s powers and Skye’s immunity to the chemicals, might she be of alien origin? That would be really cool! And there isn’t another conceivable explanation offered as of yet.

Unlike the rocky stuff above, Simmons and Fitz’s (Ian De Caestecker) reunion is a happy one, mostly. Fans have been longing for the two to get back together. However, what comes after the pair being in the same place again remains to be seen. Will this screw up Fitz’s budding friendship with guys in the group? How will the real Simmons being there impact Fitz’s hallucinations of her? Will Fitz stay upset about Simmons abandoning him? Did Simmons have a choice about leaving? They come together too late in “A Hen in the Wolfhouse” to begin exploring this yet.

All of these characters are handled extremely well this well, authentic to who they are, but also moving them forward. The same goes for recurring players like Raina (Ruth Negga), trapped between Whitehall (Reed Diamond) and Skye’s dad, who both wouldn’t mind seeing her dead. Coulson might be inclined to help her, but only if she brings some benefit to him, since she hasn’t done anything to earn Coulson’s trust in the past; quite the opposite.

Every hour of MARVEL’S AGENTS OF S.H.I.E.L.D. can’t be as intense as “A Hen in the Wolfhouse.” Sometimes, the story needs to move slower so it can explain things. But overall, this is a very good show, and having episodes like this one pays off the patient fans who have been following along in a big way. It’s appreciated.