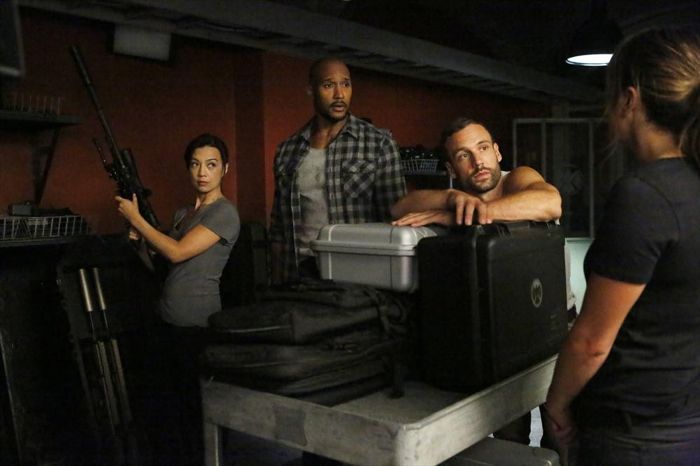 MARVEL’S AGENTS OF S.H.I.E.L.D. highlights the different characters populating its second season in the most recent episode, “Making Friends and Influencing People.” Practically every single person in the core cast has undergone a transformation as the story unfolds, and this installment, more than others, show us those changes and how they are affecting the people behind them. It’s a wonderful example of character development, the main reason AGENTS OF S.H.I.E.L.D. is the best super hero series currently running in a very crowded field.

First, we finally catch up with the real Agent Simmons (Elizabeth Henstridge), instead of the hallucination that’s been in the past couple of episodes. Shame on ABC for trying to get more viewers by implying Simmons is now working for Hydra in its promos, a ridiculous notion no one should have fallen for. But it’s really cool to see her undercover, and the sequence at the beginning of her getting ready, as well as the one where Coulson (Clark Gregg) checks in on her and cooks her dinner, are excellent.

Henstridge’s role in season one is relatively bland, so changing her into a badass spy is very welcome. She may be (one of) the techie on the team, but that doesn’t mean she’s not a trained S.H.I.E.L.D. agent. Whether her abilities come from the academy or experience in the field, Coulson would not have picked her for his original team is she weren’t something very special. “Making Friends and Influencing People” finally shows us that side of her, as even amid her own self-doubt, she stretches to her potential.

Similarly, Skye (Chloe Bennet), who starts the series as a naïve hacker, is now a full-fledged agent, so much so that Hunter (Nick Blood) bets she went to the academy. Skye isn’t hardened completely, as evidenced by her reaction after speaking with Ward (Brett Dalton), but she does follow Coulson’s orders and shoots a semi-innocent man. That is something she never would have done even at the end of last season, and it proves she can be counted on just like any other member of the team, something in doubt not so long ago.

Fitz (Iain De Caestecker) is the most dramatically different, broken by his near-death experience. Like Simmons, he isn’t usually all that tough. But this week’s MARVEL’S AGENTS OF S.H.I.E.L.D. finds Fitz sneaking in to confront Ward and almost killing him in revenge. It’s a really intense moment, one in which we wonder if Fitz has snapped completely, though he does stop himself short of murder. This illustrates the depth of his pain and betrayal, and certainly further distances Ward from any type of redemption.

It is revealed this week that Hydra has been brainwashing people to work for them, including Agent 33 (Maya Stojan, Castle). For a moment, it looks like an easy way to reset Ward, claiming he didn’t know what he was doing. Thankfully, S.H.I.E.L.D. not only ignores that exit ramp, but has Ward insist very firmly he always knew what he was doing. Whether he’s crazy or loyal to a dead man or lying about not being a follower of Hydra, this is Ward, for better or for worse, and I like it. Kudos to S.H.I.E.L.D. for not doing what most TV shows would have done, especially with such an available opportunity.

Then there’s Coulson himself. He is the boss now, and that means he has to distance himself from the others. He can be chummy with Simmons, who isn’t operating in the group, but he has to be tough on Fitz when the scientist crosses a line, and Coulson has to order Skye to shoot a guy who poses too big a threat to let go. There’s an edge to him we haven’t seen much before this season, and while he steps up in a fitting manner, one wonders how much this will weigh on him, and if Coulson really can make the tough calls. I suspect he can, after much of the fun has been drained from him, unfortunately.

Besides these major showcases, there are lots of terrific moments in the episode. Hunter trying to make peace with May (Ming-Na Wen) and Triplett (B.J. Britt) is humorous and makes him feel like more a part of the team. Bringing back Donnie Gill (Dylan Minnette) is cool (pun intended) because it ties the story back in on itself. Seeing Hydra and S.H.I.E.L.D. compete for the same resources and personnel is exciting, a real arms race between the two organizations, played out across the globe.

“Making Friends and Influencing People” is a relatively typical episode, nothing groundbreaking occurring to change the game again, that effectively uses the elements that make the show great. In between the ‘big events,’ this is exactly what fans should want to see from it.