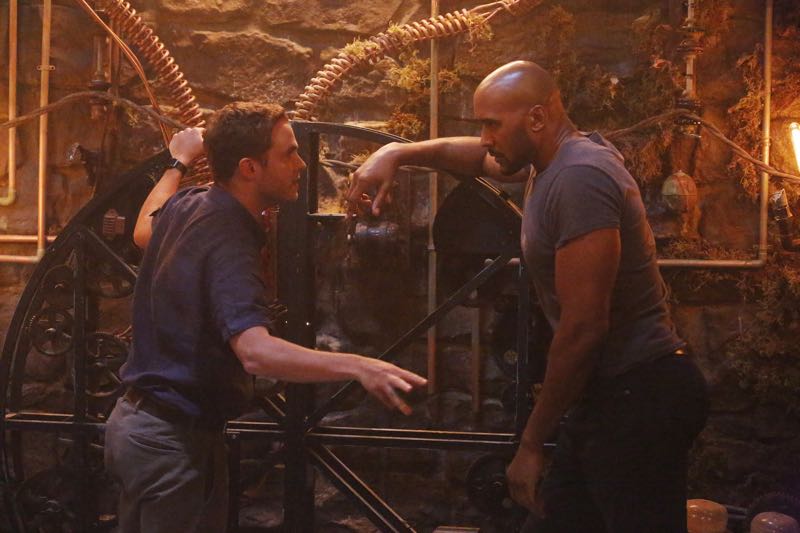 On last night’s MARVEL’S AGENTS OF S.H.I.E.L.D., Fitz (Iain De Caestecker) struggles to find the “Purpose in the Machine.” More accurately, he wants to rescue Simmons (Elizabeth Henstridge) from her imprisonment on an alien world. Thankfully, with some help, he manages to do so.

Where Simmons has been is a big part of the mystery so far in MARVEL’S AGENTS OF S.H.I.E.L.D., and rescuing her has to only be the beginning. While the portal is now destroyed, meaning it doesn’t seem the team will get to travel to where she’s been, we still don’t know what happened during her time there. It will surely affect her even more than her undercover mission in Hydra did, and I’m curious about her life these past months. Hopefully it won’t derail a romantic relationship with Fitz, which seems even more necessary now that he rescued her. And hopefully the show won’t just drop this plot and move on now that she’s back.

How Fitz convinces Coulson (Clark Gregg) that Simmons is still alive, and how Coulson tracks down Professor Randolph (Peter MacNicol, last seen in season one) to help open the portal really isn’t important. Admittedly, it is the meat of “Purpose in the Machine,” but it’s really minor in the scheme of things, which seems odd to say for an entire installment. I enjoyed this week’s episode, and there are some great moments for the team as a whole, but the hour just didn’t matter all that much to the larger arcs, save that a missing team member was recovered.

Daisy (Chloe Bennet), whom Coulson still keeps calling Skye, something that will eventually need to be dealt with, goes along with Fitz and saves the day, but her real plot this week is trying to put together her team, which she gets no movement on. Dr. Garner (Blair Underwood) has yet to approve any of the Inhumans that Daisy has recovered for field duty. Dr. Garner has a point that these people need time to adjust, but given Daisy’s impatience, I look for her to make another approach on Lincoln (Luke Mitchell), who probably wouldn’t need the cool-down period the newly turned have.

“Purpose in the Machine” catches us up with Ward (Brett Dalton), who has become quite the dangerous ruler of Hydra. It’s a shame to see how far Ward has fallen, but really, there are no redeemable qualities left in him, and I applaud MARVEL’S AGENTS OF S.H.I.E.L.D. for his two-season arc thus far. I don’t know exactly when or how Ward will make a move against S.H.I.E.L.D., this episode giving us little except the beginning of an undercover assignment, but it’s imminent.

I say that even knowing that Hunter (Nick Blood) has recruited May (Ming-Na Wen) to kill Ward. It’s not that I think May has gone soft during her months living with her father (James Hong, Mulan, Blade Runner), though it’s nice she sort of got to relax. But I don’t see such a powerful villain could be taken down by two agents on a rogue mission, no matter how capable they are or how many reasons they have to want him dead. The suspense comes not from whether they will succeed, but from if they themselves will be hurt or killed in the process. (I doubt they will be killed; Hunter has his own spin-off coming and May is too valuable to die in a small battle.)

So, in summary, “Purpose in the Machine” is an enjoyable episode that moves along a number of characters, but really isn’t important. That’s not necessarily a bad thing, as not every episode can be a vital linchpin, but it’s also a tad bit of a let down this early in the third year’s run. I expect things will pick up in the very near future.