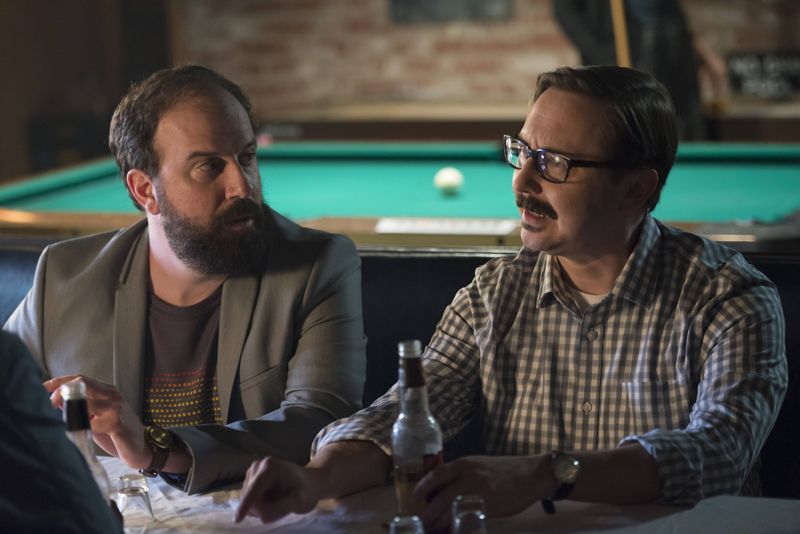 Fans and viewers who have already discovered FX’s comedy series MARRIED know exactly what they are in for when the show returns for Season 2:  more of everything — more laughs, more outrageous hijinks, more eye-popping characters and more inconceivable antics than you would think any one person should have to deal with.

In MARRIED, the show takes viewers inside the lives of Russ and Lina Bowman, but just like no man is an island, no married couple is every truly ever alone.  In MARRIED, Russ (Nat Faxon) and Lina (Judy Greer) are constantly battling the demands on them from their friends, family and co-workers and bosses.  Everyone seems to want a piece of them.  It is the art of juggling all those responsibilities and people that lends itself to a deftly funny comedy show.  Life is never is as simple as one initially thinks and with each step comes a whole new level of attachment and demands.  Watching Russ and Lina juggle all the people in their lives and striving to make their marriage work amongst it is ripe with combustible comedy.

During a special visit to the set, co-stars Brett Gelman, John Hodgman, along with newcomers Kimiko Glenn, Zack Pearlman and Sarah Burns, along with executive producer Andrew Gurland talked about how MARRIED has brought whole new levels of comedic mine-fields for Russ and Lina to navigate in Season 2:

With the addition of the new characters of Gil (Zack Pearlman) as Russ’ new boss, Miranda (Kimiko Glenn) as Russ’ new assistant, and Abby (Sarah Burns) as Lina’s new teaching co-worker, MARRIED is expanding the work worlds of Lina and Russ.  Their lives are not just about their friends and family anymore, it is about how with new jobs, one’s co-workers and bosses take to encroach on your precious time and insinuate their way into your life beyond the office.   For Russ, in trying to befriend his boss Gil and smooth things over in the office, he has found himself suddenly beholden to a man who is looking for a friend.  For Lina, she has been craving a female friend in her life to broad her horizons and help her discover her life’s dream, but found a friend who is a bit more than she bargained for.  So their jobs begin to encroach on their personal lives in unexpected ways.

As executive producer Andrew Gurland explained it, Season 2 explores how Lina and Russ’ new jobs have eased their financial burdens, but have created a whole array of new problems as their work relationships have begun to entangle with their personal lives.

Then adding to Russ and Lina’s home-front challenges will also be visits from their respective parents and in-laws.  Look for stars Francis Conroy and Gerald McRaney to guest as Lina’s mother and step-father and Joanna Cassidy, as Russ’ mom.  For Russ, he finds himself unable to communicate with his own mother and it requires Lina to step in and referee. Then for Lina, she finds out that her mother may not exactly have all of her cognitive abilities intact and that may require Lina and Russ to step in a bit.

Another special guest-star to look forward to this season is Martin Starr, who reunites with Sarah Burns, who he previously worked in the Starz series PARTY DOWN.

As if Lina and Russ did not already have their hands full with A.J. (Brett Gelman), Jess (Jenny Slate) and Bernie (John Hodgman), as well as their three precocious daughters Frankie (Skylar Gray), Maya (Rachel Eggleston) and Ella (Raeven Lee Hanan), MARRIED is throwing a whole array of new characters their way to add to their already stressed and demanding lives.  So as Lina and Russ were wishing for their dreams to come true and to embark on the next phase of life’s journey to self-fulfillment, they are finding that there are even more familial and work obligations that have to be met before achieving their dreams can be attained.

Yet no matter how stretched-thin or how haired the circumstances, Russ and Lina’s marriage seems stronger than ever.  The ever-present bond of love is felt and is what keeps them afloat through it all.  Perhaps that is due to the strong friendship between co-stars Judy Greer and Nat Faxon, and the fact that everyone work on the show is clearly having the time of their lives, but whatever the secret ingredient is, it shows in every fiber of MARRIED.  It is a fierce comedy show that believes that there is a funny-side to every step of life.  It’s lens of comedy may skew towards the ribald and perverse at times, but it definitely invites you to laugh along with it as it explores its version of absurdist reality.  Life is absurd, life is taxing, but when you chose to laugh along with it, it provides some great entertainment along the way.

You are invited to join MARRIED as it returns for its Season 2 premiere on Thursday, July 16th at 10:30 p.m. on FX.  So bring your favorite libation and cheer them along!